Since TalkTalk (TALK) shares peaked at just over £4 in May 2015 the company has experienced a difficult time. The broadband price war that summer hit TalkTalk’s sales and on 22 July 2015 the company announced growth had slowed. The shares fell 7% in a day, but worse was to come. In October that year, TalkTalk was forced to admit it had been the victim of a serious cyber-attack, with over 150,000 customers having had their data stolen. The share price went into free fall and by the end of last year hit 152p a share. But are there now signs the worst is behind the company?

The potential catalyst for a turnaround in TalkTalk’s fortunes came on 01 February this year, when the company announced its founder Sir Charles Dunstone was going to take control of the company again. Dunstone, who owns 31% of TalkTalk, resumed his previous position of executive chairman, replacing outgoing CEO Dido Harding, who had been in charge for 7 years. Until the May 2015 peak, Harding had performed well in the role, but she was unable to adjust the company’s strategy in response to the broadband price war.

Dunstone’s original success was based on TalkTalk being a low-cost challenger to the established players in the market and the feeling is he plans to take the company back to its roots.

It’s always a risk when a former successful business leader re-joins a company. Market expectations of a repeat performance can often lead to disappointment, but in the case of TalkTalk it looks like Dunstone has a viable plan. At the heart of this will be his attempts to reposition the business as a low-cost operator through the use of more efficient outsourcing.

TalkTalk was fined £400,000 last October for not having adequate website security in the run-up to the hacking incident. This obviously wasn’t great for the business, but at least the issue has now been put to bed. There will inevitably be some lingering damage towards sentiment, but this will fade with time.

From a technical perspective the TalkTalk chart looks bullish, coinciding nicely with the leadership change: 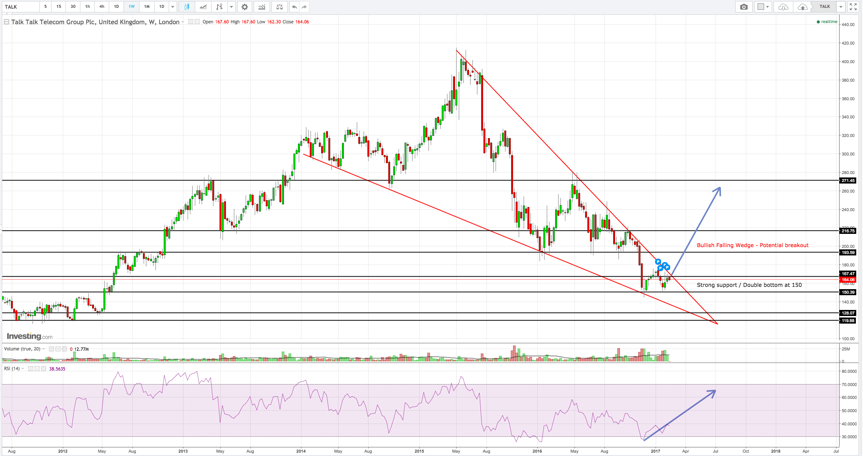 A clearly defined bullish falling wedge pattern, combined with strong support at just over 150p, suggests if the share price is able to advance past 170p then a strong breakout is on the cards. If the 150p level is retested this could be an optimal point to buy, managing risk tightly.

However, the improving RSI (the bottom chart above) suggests this stock could be finding some momentum to push it through resistance. So long as the share price is able to close above 170p, then a quick advance to about 216p seems likely.

TalkTalk’s full year preliminary results are scheduled for 10 May. By this point, Dunstone will have been back in charge for just over 3 months. Even though the results might not be that great, what the market will seek guidance from will be the outlook. Assuming Dunstone is able to hit the ground running over the next quarter he could well spring a positive surprise. Averaging into TalkTalk at current levels, with a view to a strong share price performance in the second half of the year looks attractive.

(The author of the article owns shares in the company)