In his own words Kennedy Ventures’ (LSE:KENV) CEO, Larry Johnson, is “perplexed at the company’s share price performance over 2017”. Since he took over the Namibian tantalite concentrate producer on 09 January, Kennedy’s stock fell from 9.9p on his appointment to 4.25p on 09 October. There’s been something of a recent revival in the company’s market fortunes, leading to a 5.625p close on Friday. A casual look at this year’s chart suggests this level represents short-term resistance, but have investors sufficiently forgiven Kennedy to help the company’s share price push on from here?
When asked about Kennedy’s earlier disappointments, Johnson was direct and to the point:

“Previous management was probably too optimistic. This made my role tough in the beginning because there were some legacy numbers floating around, which couldn’t be achieved. I immediately began looking at the whole company’s operational potential and felt we needed to reset expectations. I accept this will have been hard for some to take, but my job is to manage a well-run business and deliver an ambitious, but achievable, plan. As such, I led our focus much more towards a fixed pricing model, rather than the variable numbers that had previously been talked about.”

This is a pretty robust answer, but for many investors won’t necessarily be that comforting. Over the course of 2017 Kennedy has raised a total of £5million, £1.25million at 9p in February and £3.75million at 6p at the end of July. Given the share price performance, on the face of it, these fundraisings have not done much to move the company forward. So I pushed Johnson a little further and asked him to quantify how the new model would deliver results:

“I’ve been in the tantalum industry for over 35 years and have extensive supply chain experience. This really is a business I understand and is why I was originally brought into the company. When I joined it was clear there was a lot of potential here, but urgent improvements were needed to realise that. With our new focus on a fixed price sales model, my aim was to target the industry’s big guns. I wanted to go after the end users of our product and secure stable contracts. So far I’ve been successful in this and in July closed a multi-year deal with one of the world’s leading users of tantalum. I don’t think the market has yet keyed in the importance of this deal and accompanying operational improvements it has encouraged.”

That might be a fair point, but one of the big reporting problems on AIM is that companies are only required to announce results twice a year. Even then the numbers are usually horribly out of date and don’t reflect current underlying conditions. Kennedy is potentially a good example of this. The company’s year-end results to 30 June will be due out by the end of December. However, the “multi-year contract” was only signed on 17 July. Even if Kennedy has taken great leaps forward since, shareholders will have to wait until the end of March for the interim figures to 30 December.

I put this to Johnson, pointing out as a general comment that there is a great deal of understandable private investor mistrust towards AIM executives after all the scandals in this market:

“I understand that, but I’ve not spent my working life as a professional in this industry suddenly to get involved in some sort of stock promotion. I live at the mine and have a dedicated and talented team. If I didn’t genuinely believe in the potential here and in my ability to deliver on that, I wouldn’t be wasting my time. There is a fantastic company to be built here and I will do all I can to realise that ambition.”

Fair enough, so I asked how he planned to achieve that:

“One of the best, yet most challenging, characteristics of our client is that it is an end user and is extremely demanding in its operational expectations. When we originally announced the deal we commented on the improvements the client expected, both to improve grade and increase output.

This process has taken time, but when our customer came for its first site visit, its representatives freely admitted they were hit with “the wow factor” over the potential size and quality of our operation. This helped secure their patience and also meant we were able to negotiate favourable terms for the company.

The last five months have been hard work as we’ve delivered on our customer’s operational requirements. We’ve achieved a lot in that time. For example we’ve improved processes at the plant, improved service contracts such as our transport agreement and initiated more bulk purchases including items such as diesel fuel. The point of this is that not only have we increased our output capacity, but we’ve also increased our overall gross margins. This won’t filter through in the next set of numbers we release, but it does mean we are well positioned for 2018.”

Again, if taken at his word, this sounded like a convincing answer. The story makes sense and the actions taken by Johnson in response to the situation he inherited seem sensible. The proof of the pudding will be in the numbers, but on what basis does Johnson now believe investors should take a punt on him delivering what he says?

“We are working with the best materials and, I believe, among the highest grades in the world. I would challenge anyone in the market to challenge our position in terms of hitting purities.

There is also the potential for expansion. We are in the process of completing saturation drilling to prove up a complete mineralisation JORC, which we hope to deliver by the end of the year. Taking into account the output improvements we’ve made, we should soon be at a point where we could secure more long-term supply contracts with the World’s Big 5 end-users.

2017 has been about digging in and fixing what needed to be fixed. 2018 will be about commercial growth.”

At 5.625p, Kennedy is valued at £14.15million. Despite Johnson’s confident stance, sentiment towards the stock remains cautious. If he delivers what he says he is going to, it is quite possible the company’s shares will trade at a multiple to where they are now. Of course, waiting until that point would be too late. Although I’ve not yet taken a position in Kennedy, Johnson is a CEO who comes across as both credible and sincere. A share price breakout from this level would be extremely encouraging, but if there is further weakness that could present a better buying opportunity. Either way, this is one stock I expect to add to my portfolio for 2018. 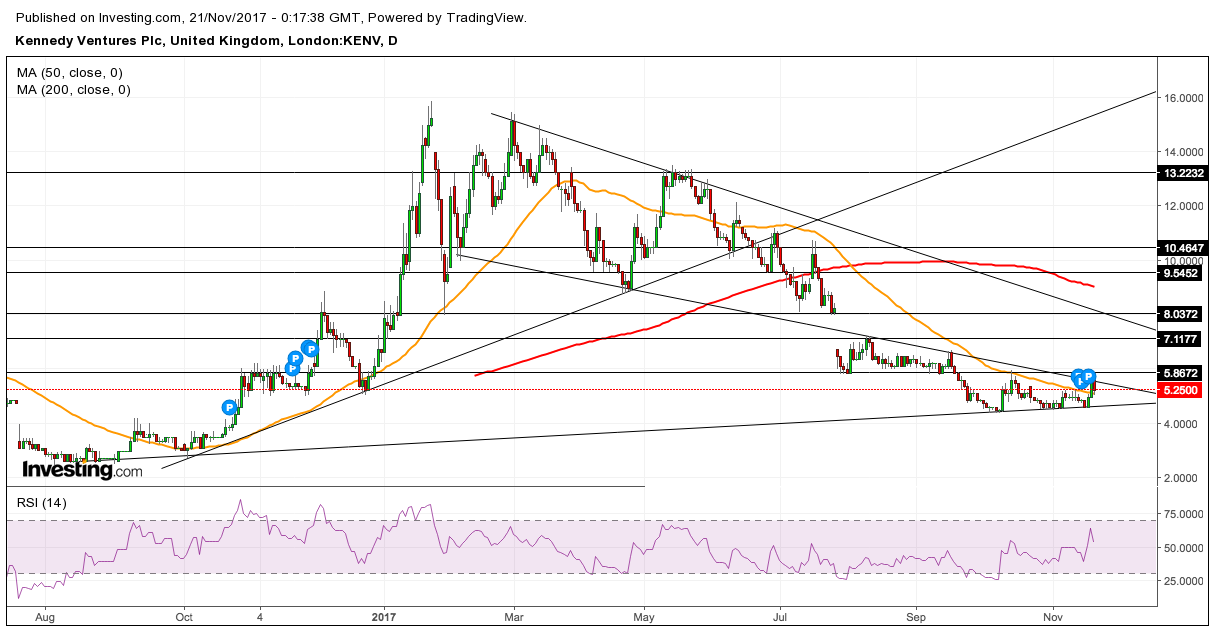 Disclosure:
The author of this piece does not own shares in the company written about above nor has he been paid to write this article