Luceco (LSE:LUCE) is primarily a manufacturer and distributor of LED lighting and Electrical wiring. It floated on the main market in London in October 2016 and subsequently enjoyed a steep climb in its valuation off the back of strong earnings. By November 2017, its share price had doubled, peaking at 262p. Just 2 months later the shares have hit 60p, what has gone wrong and might there be a recovery play to consider?

Luceco is a well-established company based in the UK and China and includes the BG, Masterplug, and Ross brands. It has experienced strong revenue and profit growth over the past 4 years. The huge fall in its share price began on 15th December with a profit warning in which the company stated there had been a weakness in its gross margins during H2.

Luceco explained, “The principal reasons for the gross margin weakness have been the strengthening of the Chinese RMB versus the US Dollar, alongside the ongoing weakness in GBP and increased commodity costs.”

Luceco predicts profits for FY 2017 will now come in at around £13.2m versus market expectations of £16.7m.  Compare this with a profit of £9.66 for FY 2016 and this is still a healthy year-on-year increase of 36%. So why has the company’s valuation shed 75%? In the trading update, Luceco also owned up to incorrectly assessing the value of the group’s stock, which resulted in it failing to identify the margin weakness sooner. As a result, the group’s financial controller resigned. OK, so the company made a mistake – it happens – and it has now assured shareholders that actions have been taken to ensure it doesn’t happen again, not to mention a head has rolled. In such circumstances, a sell-off is always expected, but Luceco has nose-dived and this seems largely down to a loss of trust.

On 24th November, CEO John Hornby sold £4.69m of stock at a near peak-level of 234p. That was just 3 weeks before the profit warning and is an obvious red flag many investors will be uncomfortable with. The RNS regarding the sale did try to reassure shareholders stating it was executed to settle personal tax liabilities, but that fact has clearly done little to calm the market. Mr Hornby, together with Pippa Hornby, still owns just under 31.4m shares (19.5% of the company) and It has also been agreed that the CEO will not sell any further shares for a minimum of 6 months after the transaction. However, this has still not been enough to quash negativity in the share price.

The price has continued to drop this week from 100p to 60p without any comment from the company so far. It might be a prudent move for Luceco to release a statement of opinion on the drop in an effort to reassure the market. It has mentioned it intends to take action, namely increasing its hedging activities and it would be good to hear that action has indeed been taken. An announcement of the final results for 2017 is expected in April, but that’s still a difficult 2 months away for shareholders.

Another factor working against the share price is its relatively short period as a listed company. With the IPO price broken, there is little historic support on the chart and it’s never sensible to try to catch a falling knife. Also, the company has debt of £26.1m which might start to weigh heavy on its balance sheet if cash generation was inhibited. However its worth noting debt is down from £29.4 in FY 2016.

As I write, the share price has bounced strongly off 60p with a good level of buying returning. Whether this is a dead-cat bounce or the start of a recovery we will have to wait and see. Currency and commodity prices may continue to be a concern moving forward though. The weakening Chinese Yuan (CNY or RMB) since 2014 will have contributed to the company’s growth and its reversal, together with increasing commodity prices since 2016, will be a headwind to future operational profits. The Yuan and commodities have both been recovering over the past few years and this isn’t necessarily set to continue. 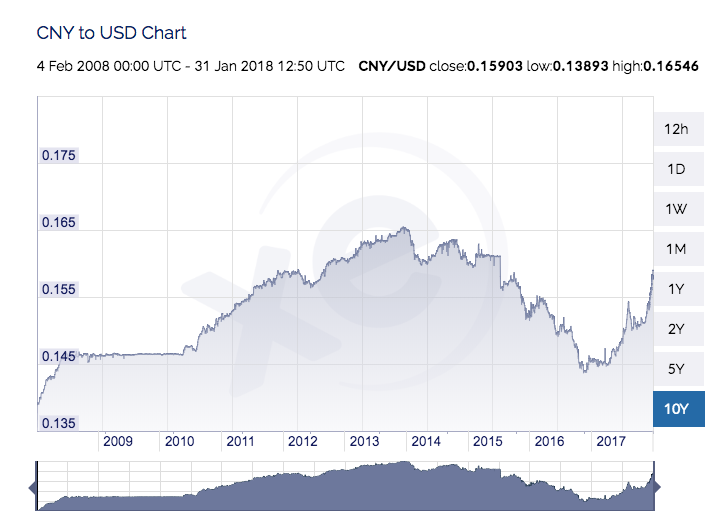 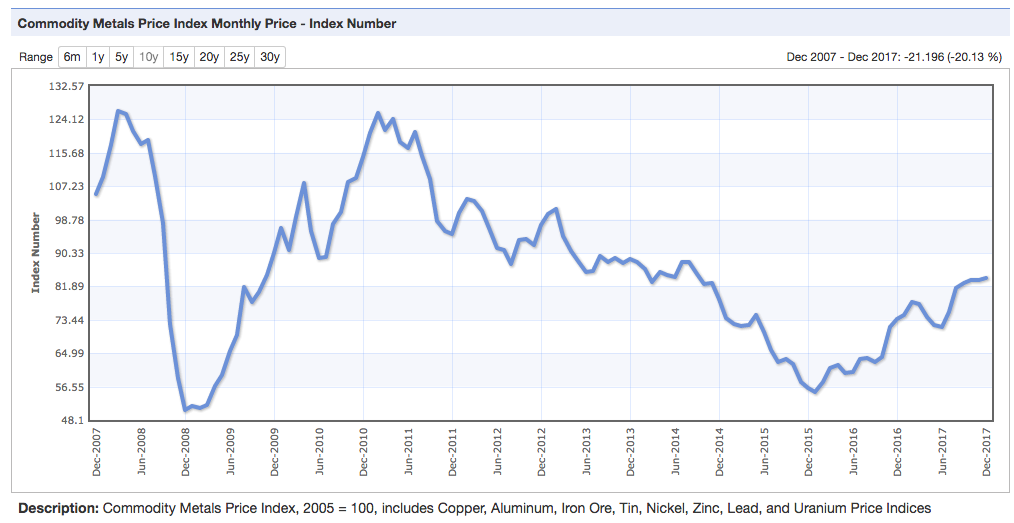 The Dollar has been showing signs of a revival in recent weeks and this could result in a retrace for commodities and other currencies.

I feel the level of growth Luceco has achieved provides some wiggle room here, and assuming there are no further surprises, Luceco’s P/E Ratio of around 11.6 does make circa 70p an appealing entry level.