Since it listed on AIM in February last year Eco Atlantic’s (LSE:ECO) share price has been on a relentless rise. Even the recent volatility in markets has done little to dampen the mood. In just 12 months, the exploration oil & gas firm has found itself attracting the attention of the sector’s major players, including a potential farm in with Total (NYSE:TOT) off the coasts of Guyana and a direct C$14m investment from African Oil Corp (TSX:AOI). Meanwhile the company has continued to make positive progress at its Cooper licence offshore Namibia, with its main partner Tullow Oil (LSE:TLW). With plenty of news flow sitting on the horizon, can the company’s bull run continue into 2018?

Eco Atlantic’s most anticipated project is the 1,800km2 Orinduik Block, situated in the shallow seas of the prospective Suriname Guyana basin, South America. Here Eco is swimming in the same waters as a series of major, historic discoveries by oil giant ExxonMobil (NYSE:XOM) in this exciting oil province.

The company’s 94pc owned subsidiary ECO Guyana holds a 40pc working interest in the block alongside Tullow, which owns the remaining 60pc and is also the operator. The firms’ 10-year petroleum agreement for the basin with the Government of Guyana commenced in January 2016 and included two initial two-year phases, each with their own requirements. Phase Two commenced in January this year and required Eco and Tullow to acquire 1,000km2 of 3D seismic data .

However, the two companies had already completed these requirements during Phase One, carrying out a 2,550km2 survey in September 2017, more than two years before they were required to. Importantly, this means Eco’s financial obligation for Orinduik is covered until 2020.

But an even more significant impact of this early activity was that it allowed Eco to enter into a potentially lucrative option agreement with major oil producer Total on the block. For an immediate payment of $1m (£710,000), Total has the option to acquire a 25pc working interest in Orinduik, out of Eco Atlantic’s 40pc stake, for a fee of $12.5m (£8.9m) payable only to Eco.

Total will have 120 days from the date it receives Eco Atlantic and Tullow’s 3D Seismic data to decide whether to exercise the option. If it does this will leave Eco with a 15pc stake in the block. The company’s chief executive, Gil Holzmann, expects a decision to be made by Total in the next 3-4 months.

If Total does decide to exercise the option, which Holzmann is confident it will, then Eco will be fully funded for its share of the costs of up to four exploration wells, which would otherwise have cost the firm around $3m each. It goes without saying that the exercising of the option and any subsequent news on the wells could provide a catalyst for a positive movement in Eco‘s share price.

Quickening the pace in the Suriname Guyana basin

A recent surge of activity in the Suriname Guyana basin has also been a factor in encouraging Eco and Tullow to step up their work at Orinduik. The basin is a fast emerging oil industry frontier, expected to produce 150,000Bbl/day by 2020 and 400,000Bbl/day by 2024. As it stands, $6bn worth of oil and gas investments are currently planned in the area.

Even better for Eco, Orinduik is adjacent and updip to the deep-water Liza Field, recently discovered by ExxonMobil and Hess, which is estimated to contain as much as 2.5bn barrels of oil equivalent. It was covered by the largest 3D seismic surveys in ExxonMobil’s history and just one of a handful of billion-barrel discoveries globally in the last half-decade.

In March, ExxonMobil also discovered the Snoek oil prospect at Guyana, an 82ft long high quality, oil-bearing sandstone reservoir that has estimated reserves of more than 3.2bn barrels. It is located just five miles southeast of the Liza discovery and is once again in very close proximity to Orinduik.

Eco is the only AIM-listed firm to operate in the high potential basin. Gaining access to the area’s undeniably massive upside potential at such a low price could be a very wise move.

As Holzmann puts it: ‘These discoveries do not just emphasise the fact that the Suriname Guyana basin is active, they also show that we are in the right postcode in this neighbourhood. We are seeing the same trends, same structures and the same kind of a play on our block as ExxonMobil is seeing. After all, we are just 6km away from a major oil discovery.’

Eco also holds interests in four offshore petroleum licences totaling, an area of around 25,000km2 in the established oil basin offshore Namibia. The four licences are called Cooper, Guy, Sharon, and Tamar, and are being developed alongside big-name partners such as Tullow Oil, AziNam, ONGC, and Namcor.

Significant 2D and 3D surveys and interpretations have been completed at all the sites, and they are expected to contain more than 2.3bn barrels of prospective p50 resources (NET to Eco) across the Walvis and Luderitz Basins in Namibia.

In November, Eco said that it had received partnership approval to release its public notice of environmental clearance certificate for drilling an exploration well at Cooper, its most advanced licence. In essence, this meant that all partners on the project believe there is a highly justifiable prospect at Cooper (which was named “Osprey”), and an exact drilling location is being defined.

Eco is the operator of Cooper, with a 32.5pc working interest, and Holzmann estimates that the licence could contain as much as 850m barrels, of which Eco would be entitled to around 200m barrels.

This is particularly exciting for the company, given the resurgence of interest and activity from oil companies in Namibia throughout last year. A number of major and independent E&P companies have undertaken drilling activity in the blocks surrounding Cooper, including wells announced by Tullow Oil and Chariot Oil & Gas (LSE:CHAR).

Indeed, Eco’s three other blocks in Namibia – Guy, Sharon, and Tamar, are situated around a block at the centre of the basin owned by Portuguese oil firm Galp. This block was recently used by ExxonMobil as its entry to Namibia through a farm-in.

‘The fact that ExxonMobil decided to come into Namibia when it is very difficult for a business of its size to get all the permission needed for a first country entry is very telling. I have every reason to believe that the basin will be very active and very sought after in the next year. We are perfectly situated for further farm-out deals with bigger companies and to basically keep on progressing these blocks,’ said Holzmann.

In November, major Canadian oil player Africa Oil Corp , a member of the Lundin Group of Companies, made a surprise CAD$14m (£8.5m) investment in Eco Atlantic, subscribing to a 19.8pc stake in the company. With Africa Oil Corp buying Eco Atlantic’s shares at a 28pc premium to its then market price, the deal immediately benefited shareholders by both creating value and boosting Eco’s cash levels to around CAD$16.4m (£9.3m).

If Holzmann’s confidence in Total exercising its option at Guyana is justified, then Eco was already fully funded for its work in Namibia and Guyana. This cash, therefore, gives it an opportunity to expand even further. Indeed, the firm said the money is being put towards ‘actively identifying, negotiating and contracting new oil and gas exploration assets and conducting initial work programmes’.

Furthermore, as part of the deal, Keith Hill, president and chief executive of African Oil Corp, joined Eco as a non-executive director. He brings to the table more than 30 years’ experience in the oil market, including senior positions at Occidental Petroleum and Shell Oil.

Perhaps the most exciting aspect of the deal, however, is that it also includes a strategic alliance between the two firms that will allow African Oil Corp to bid jointly on any new assets or ventures proposed to be acquired by Eco. With African Oil Corp sitting on more than $400m of cash, that Holzmann says it is looking to put part of it to new exploration work, and Eco taking the lead, this agreement gives the latter a truly exciting position of strength.

’Africa Oil Corp really like the way we approach new projects and we actually pursue new ventures and they wanted to take a piece of what we have. Now when we are pursuing new ventures, as we always do, we have a big partner with us that can allow us to meet our work obligation immediately. We do not need to go to the market to raise money in these cases, diluting value for the shareholders,’ said Holzmann.

For a business with a market cap of just £55m, Eco Atlantic has an impressive number of strings to its bow.

Firstly, it has a strong cash balance of CAD$16.4m (£9.3m), which could soon increase by a further $12.5m (£8.9m) if Total exercises its option. Not only does this mean that the firm is fully funded for its existing projects, but it also means it can comfortably go out and explore further – especially considering it now has the hefty weight of African Oil Corp behind it.

Secondly, and perhaps most importantly, Eco is taking great effort to stick to its stated strategy of targeting early stage opportunities in highly prospective, under-explored, politically stable jurisdictions. This has led it to end up in Guyana and Namibia before many of the major oil players.

The success of this strategy can already be seen in the firm’s partnerships with big names like Total, Tullow Oil and African Oil. And with mammoth players like ExxonMobil circling the areas it is based in, who knows what could happen?

As Holzmann puts it: ‘At the sign of first oil, we could become the target of some sort of rich deals by one of the big players who they don’t really need us to do the development and exploitation for them. If they like our assets I can think of many business scenarios and with numerous companies.’

Even with a little volatility so far this year due to rising crude outputs in the US, the backdrop for Eco Atlantic remains healthy, as oil prices stand strong relative to the lows they hit several years ago. As the graph below shows, Eco Atlantic’s shares have risen from around 17p to 32.4p over the last two quarters. However, with the business displaying the prospects of a much larger player, this bullish trend could have much further to run. 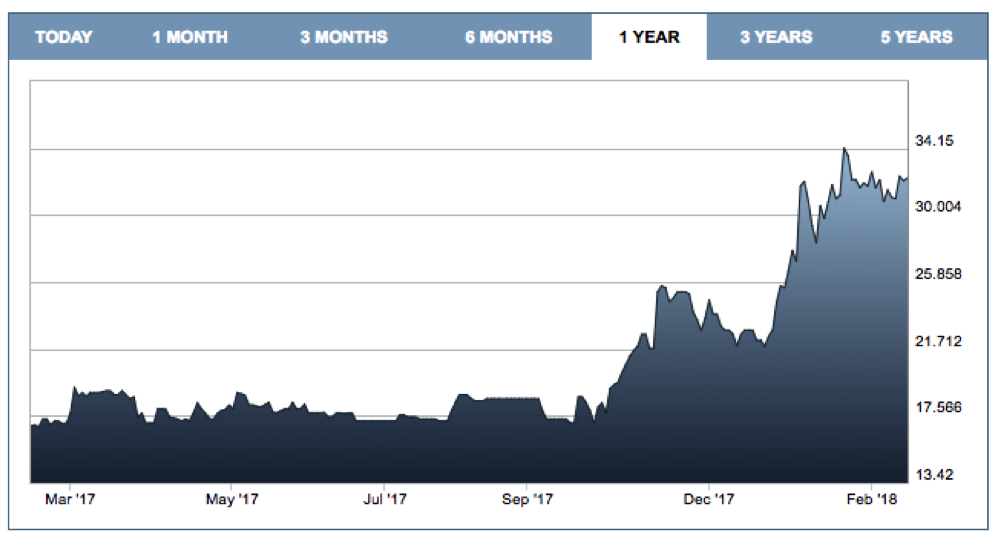