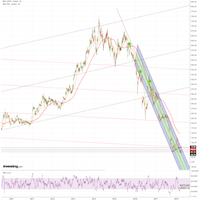 Outsourcing company Interserve (LSE:IRV) is now worth a tenth of what it was valued at just three years ago. In December, it secured a deferral of loan covenant test, but only until 31 March 2018. The share price rallied on the news, and in fact managed to nearly double its price, reaching £1.24 in January. As the date of the covenant test looms ever nearer, the share price has sharply fallen back to 66p. This was helped along by significant institutional selling, although some holders, such as Goldman Sachs have retained exposure via longer-term CFDs.

It would obviously be very prudent to wait for news as the covenant test is due shortly, but I’m keeping an eye on the chart all the same. The current price action is bearing down on previous lows and further bad news could extend those. Next support is around 61p, then it drops to the all-time low of 52.5p.

What is noticeable on the daily chart is the ‘Pitchfork’ pattern. Since August last year, the share price has shown some level of respect to the lines separating the four quadrants within the pattern, on a number of occasions.

It’s not an exact match by any means, but it shows quite nicely that the price action can often be split into ‘quadrants’ or zones which can give more clarity when analysing the chart.

Zooming out, on the weekly chart you can see well-defined zones and trend lines spanning 2 decades.

A grasp of these key levels can provide you with stronger entry and exit calls. Unfortunately, in the case of Interserve, the price action has ‘left the building’ and there’s little existing support to go on.

At the moment, this one looks like a binary bet to me. The company has too much debt and may need to raise funds. The chart offers little in the way of historic support levels and it’s only real news that can settle this one. If there’s a positive outcome, it will finally break free of that Pitchfork!