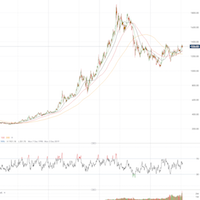 The Gold price is increasingly becoming cornered between rising support levels and a relatively stable resistance zone. The commodity has been range-bound below $1400 for the past four years but a string of higher lows could potentially be the platform for a significant move. A higher low followed by a higher high is a positive indicator of bullish sentiment. $1362 was the most recent high and we have witnessed another higher low since that peak. A move above there, combined with a close above the red resistance line, presently around $1365, would be a hugely bullish signal.

The Relative Strength Index (RSI) is currently in the 50s which allows plenty of headroom for such a move, however lines of resistance and support also play out with this indicator – It too is closing in on a juncture as the differential between RSI support and resistance narrows.

The Gold price recently dipped below its 50 DMA again after a convincing bounce off it 2 weeks ago. Although currently above it, any prolonged period below the 50 DMA can only add risk to the downside.