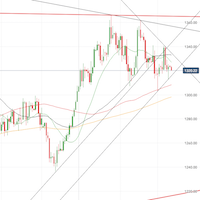 The Gold price has been treading water recently and for good reason. The intrinsically-linked US Dollar strength has been in a period of indecision, repeatedly dipping below and above a key support line – it’s going to go one way or another soon enough as the Dollar Index is moving in an ever-tightening range.

If you compare the US Dollar Index to Gold prices over the past 5 years you see a clear correlation between the two, with US Dollar strength no doubt leading the way.

A look back over a full decade reveals a clear widening of the difference between the two in 2010/2011, which culminated in Gold spiking at around $1900 an ounce. What will it take for that to potentially happen again? That last spike was largely attributed to paranoid investors reacting to the crash of 2008 and growing worldwide instability. I think it’s fair to say most people agree we’re going to see the mother of all crashes at some point after years of sweeping financial problems under the QE carpet. Although there is arguably a wider range of precious commodities available for investors to squirrel away their funds into during a downturn, Gold is still the obvious favourite. Whether Cryptocurrencies have something to say about that is another consideration.

Anyway, that’s enough musings about the next financial crash for a Monday morning! At least for now, Global markets are starting to look much more bullish than they did a week ago after Friday’s positive moves, with the Dow Jones and S&P 500 back above their 50 Day Moving Averages (DMAs). Even more positive, and indicative of a potential continuation of the bull market, is a higher close of the S&P 500 futures this weekend, above its recent high.

Back to Gold – It’s worth keeping an eye on the US Dollar Index, since a decisive move either way, will likely dictate Gold’s next price trend. Continued Dollar weakness could spark the beginnings of the next Gold bull run, and holding horns on the next stampede might not be such a bad idea. Particularly in the event we see any further red flag waving market corrections.