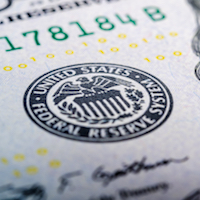 Indices around the world edged down slightly today after the US Federal Reserve stuck by forecasts that it will lift interest rates three times in 2018. As expected, new Fed chair Jerome Powell hiked rates yesterday from 1.5pc to 1.75pc in the first meeting of the central bank’s Federal Open Market Committee (FOMC) since his appointment. Policymakers cited the strengthening US economy, strong employment data and a buoyant labour market as reasons for hiking rates.

However, the real news for markets was the FOMC’s signal that it plans to increase rates twice more this year. This put to bed growing expectations of four or five rate hikes this year following the release of the minutes of the Fed’s January FOMC meeting, the last under former Fed chair Janet Yellen. In these, the Fed appeared to take a hawkish tone on the rate of US economic expansion and inflation growth and suggested there would be an increased likelihood of further interest rates.

The central bank’s more dovish tone last night has led investors to refine their expectations of monetary policy going forward, and equity markets around the world have edged down as a result. The FTSE 100 is currently down by 0.6pc, or 39, to 7,000, while France’s CAC 40 and Germany’s DAX index are both down by 1.1pc. Meanwhile, the S&P closed down by 0.2pc, and both the Shanghai Composite and Hong Kong’s Hang Seng closed in the red. As it stands, Japan’s Nikkei has been the sole exception, finishing up 1pc. In the debt market, the yield on 10-year US Treasuries fell by 4.6bps to 2.861pc, after soaring last month when investors sold out of debt in anticipation of a more aggressive rate hike path.

With the Fed typically leading the way for central bank policy around the world, all eyes will now be on Mark Carney, governor of the Bank of England. Policymakers on the BoE’s Monetary Policy Committee will set UK rates at noon today and, although markets are not anticipating a rate hike, the tone taken by the committee around its future rate path could be telling. Markets will be especially keen to get a sense of where the Bank stands after a drop in inflation on Tuesday to 2.7pc in February from 3pc in January took some pressure off. That being said, prices are still rising faster than the BoE’s 2pc target.

Looking beyond this year, in yesterday’s update, the FOMC revealed that its median official expects rates to rise to 3pc in 2019, then to 3.5pc by the end of 2020.

Although rate rises are generally an indicator of a strengthening economy, in this era of ultra-accommodative monetary policy and record low interest rates the true meaning behind any hikes can be warped. For his part, Powell – whose attitude the market is still trying to pin down – said the Fed is ‘trying to take the middle ground’.

‘On the one hand, the risk is we wait too long and then we have to raise rates quickly, and that foreshortens the expansion. We don’t want to do that,” he said at a press conference. ‘On the other side if we raise rates too quickly inflation doesn’t get sustainably up to 2pc and that will hurt us going forward. We need that, we need to make sure inflation expectations are anchored. The middle ground consists of further gradual increases in the Federal Funds Rate as long as the economy is broadly on this path.’