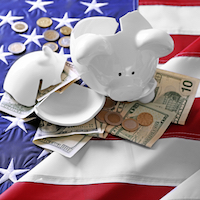 The 10-year US Treasury yield broke through the dreaded 3pc mark for the first time in four years this week, a level many in the market deem as dangerous for the global economy and equity markets. The yield has been rising over recent months thanks to signs of strengthening US inflation and the Federal Reserve’s decision to stand by its plans to tighten monetary policy. Many now worry that a close above 3pc will open the floodgates, leading yields to accelerate higher and prompt an even more severe reaction from financial markets than the correction seen in February.

Rising bond yields present a threat to the global economy because of the incredible level of indebtedness experienced by many advanced countries. In the US, for example, the government’s total debt now stands at nearly $20.5trillion. To put this into context, America’s GDP is about $19trillion. The Federal Government spends about $4trn a year, but its annual deficit is about $665bn (and rising). The chart below illustrates how acute the situation is: 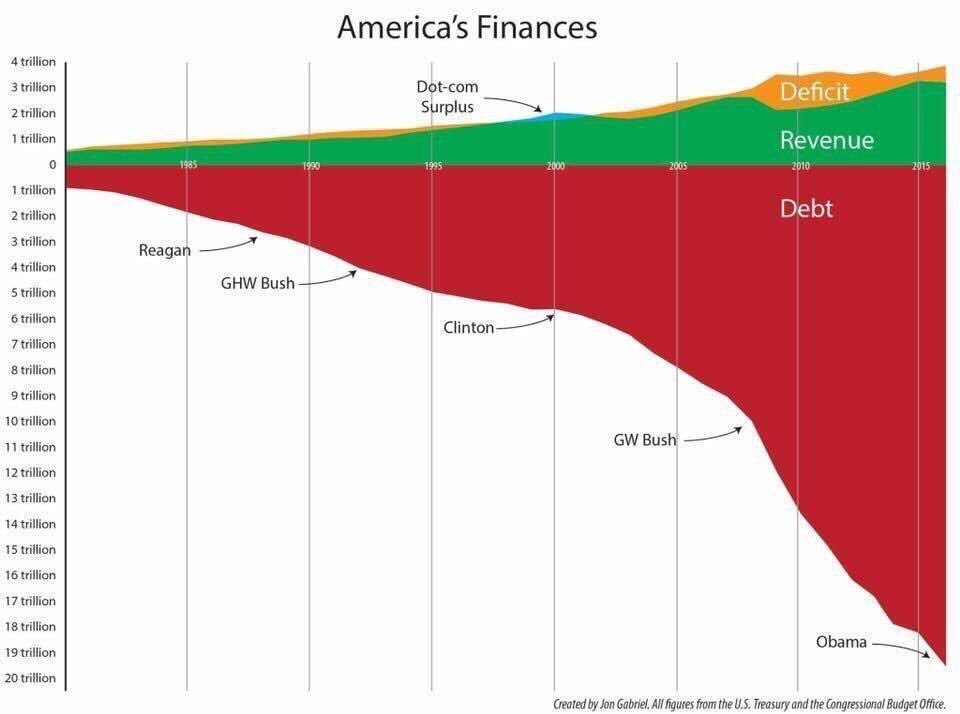 While the state of the US’ public finances is an obvious cause for concern, the other problem that rising yields bring is that they increase the amount of interest the government has to pay on servicing its debt. Each one percent that bond yields rise, adds a further $200bn a year onto the debt’s servicing costs. As much as rising yields are a vote of confidence in the strengthening US economy, they also present a threat to that very growth by sucking vast sums of productive working capital out of the system.

For equity markets the danger is clear. If historical precedent is anything to go by, rising yields imply that interest rates are also heading higher. For the equity bull market, which finds its roots firmly in the historically loose monetary policy of recent years, if the Federal Reserve starts to adopt a more hawkish stance then this could pull the rug from underneath valuations. With global indices already looking somewhat overcooked, despite the recent pullbacks, there remains a significant risk of a major global sell-off if rates rise too quickly.

In the words of investment guru Warren Buffett- ‘Only when the tide goes out do you discover who has been swimming naked’.

US bond yields soared higher at the end of February when minutes from the Fed’s January meeting suggested the central bank could increase rates by more than expected this year due to fears that inflation will spike out of control. Following this, the bond market calmed considerably due to the Fed’s decision at its March meeting – the first under new chair Jerome Powell – to stick to its originally-planned three interest rates in 2018.

But yields have crept up again throughout April, a move that analysts have linked to increased inflation concerns due to an oil price surge.

Furthermore, the solid global economy has heightened expectations once again that the Federal Reserve will raise interest rates more aggressively to combat inflation.

When the Fed is behind the curve it is always bad news for bondholders.

As a general rule of thumb, bonds issued after an interest rate hike have the highest coupons on the market, pushing the price of previously issued bonds down to compensate.

Because of this, bond yields – which move inversely to bond prices – tend to march higher.

On Tuesday, as was widely expected, the 10-year yield finally passed the global 3pc benchmark for financial markets and currently sits at 3.016pc.

Many analysts believe that if US 10-year Treasury rates stay above 3pc for a sustained period of time then it will prompt a major sell-off in the global equity market. Fears that the selloff will be global stem from the fact that the US tends to lead the pack when it comes to increasing rates.

Indeed, the Fed’s increasingly hawkish stance since hiking rates for the first time in a decade in December 2015 has already been reflected in the UK, which increased rates at the end of 2017.

Furthermore, despite leaving rates last month, the Bank of England said in February that it would need to increase rates ‘earlier’ and by a ‘somewhat greater extent’ than previously thought, following in the Fed’s footsteps.

As a result, global markets have reacted accordingly to the move in US Treasury yields this week, with the FTSE 100 and S&P 100 down as at the time of writing, and other markets across Europe and Asia also suffering.

The fundamental reason behind fears of an equity sell-off is that higher rates mean companies, like the US Government, will have to pay more when borrowing money and will have less room to increase returns shareholders – making stocks less attractive.

Large stimulus programs like quantitative easing (QE) – which sees central banks create money by buying securities such as government bonds with cash that did not previously exist – have helped to prop up markets since the financial crisis.

QE has allowed the Fed to keep the cost of borrowing artificially low, allowing money to flow freely and thus providing firms with easy access to growth capital.

But it has also led the amount of debt on the Fed’s balance sheet to reach its highest level in four years. It is only by returning to a normal policy stance that this can be corrected. Investors have been willing to accept higher valuations on US equities in part because interest rates have remained historically low.

But if interest rates rise too quickly then a corresponding rise in bond yields could be devastating for equities, where an increasingly inverse correlation is being seen. Indeed, one argument is that the sudden withdrawal of monetary policy will reveal a number of highly-valued stocks lacking strong fundamental value.

In parallel with this, higher bond yields will generally make fixed income instruments more appealing to investors, potentially provoking a rotation out of equities into bonds.

Scott Minerd, global chief investment officer at Guggenheim Partners, recently said the steep rise in Treasury yields in recent months suggests investors are increasingly in agreement that the Fed is behind the curve.

‘The market is moving from complacency—where it really did not believe the Fed was going to do what it said it was going to do—to a time when it has begun to realise that the Fed may be behind the curve,’ he said. ‘Markets are engaged in a tug of war between higher bond yields and the stock market. In the near term, the two markets will act as governors on each other: Higher bond yields will drive down stock prices, and lower stock prices will cause bond yields to stop rising and to fall.’

He compares it to the market environment of 1986, where diminished concerns over oil prices stopped the central bank from increasing interest rates. When growth and inflation picked up the Fed had to rapidly increase rates to keep up with price pressures, which led bond yields to rise despite an extended equity bull market. The market reached a tipping point and crashed in 1987.

‘Today, investors have the same sorts of concerns they had in 1987. Eventually, the Fed will acknowledge that three rate hikes will not be enough, but it is going to have to raise rates four times in 2018, and market speculation will increase that there may be a need for five or six rate hikes. That will be the straw that breaks the camel’s back,’ he said. ‘This is a highly plausible scenario for this year, but who knows how these things play out in the end.

What next for private investors?

Predicting the next bear market has confounded the vast majority of commentators for years. Until recently nothing seemed like it could get in the way of the market’s irrepressible move up. The mood has certainly dampened over recent months, but it is far from certain the party is over.

Were we living in normal economic times, it almost certainly would have been. However, these are far from normal times. The Trump Presidency has torn up the rulebook and the appointment of Jerome Powell as Chair of the Federal Reserves smacks of political favouritism. If bond yields keep marching higher, and this causes an existential to the bull market, it would not be at all surprising to see Powell launch “the most beautiful and incredible” (as the President would not doubt hail it on Twitter) QE4.

Of course, this would do nothing to solve the underlying structural faults that have plagued debt-riven economies for the last fifteen years, but so long as the market is awash with liquidity, who cares?