Private investor support group ShareSoc has launched a campaign against PwC’s liquidation of insolvent broker Beaufort Securities, describing its proposals as a ‘mockery of regulatory protections for investors in the UK’. In an email sent around yesterday, ShareSoc director Mark Bentley said PwC’s proposals breach the safety of ring-fenced assets and bring into question the whole system of regulatory and legal investor protection. The group is now appealing for clients of Beaufort to come together as soon as possible for a collective response on the matter with the aid of legal advice.

The Financial Conduct Authority (FCA) declared Beaufort Securities (BSL) and sister company Beaufort Asset Clearing Services (BACSL) insolvent in March, following a sting operation by the FBI in the US. The watchdog appointed PWC as the administrator of BSL and special administrators of BACSL. Shortly afterwards, PWC confirmed that the monies and securities secured came in at c.£50m in segregated client money accounts and c.£850m in clients’ securities.

In April, it said client money and client assets were, as at the date of administration, substantially complete save for a minimal number of isolated deficiencies. However, it had marked down the initial £850m of client assets down to £500m as a result of illiquid/nil value positions. It also proposed charging £100m for the wind-down over a period of four years, a fee that ShareSoc has called ‘exorbitant’.

According to ShareSoc, PwC has not justified the cost or the timeframe of its services, which it describes as ‘the simple task of transferring an electronic registry of client assets/money to one or more replacement brokers’. It says that around 700 clients with assets valued over £150,000 may suffer a loss of up to 40pc on their ring-fenced assets to pay PwC’s fees. As such, its campaign aims to minimise the losses suffered by Beaufort clients and the time before clients regain access to their securities held by Beaufort.

A ‘fighting fund’, comprised of donations from clients, will be used to take legal advice on how to challenge the administration and, if needed, will be put towards initiating litigation to make an effective challenge.

‘Over 14,000 clients invested through Beaufort Securities only because of the assurance that assets are ring-fenced as per FCA rules and the whole notion of ring-fencing presumably is to protect client assets/money in such an event. The suggestion that PWC as Special Administrator can seize client property and treat the owners as creditors of the failed entity makes a mockery of regulatory protections for investors in the UK,’ said Bentley.

‘ShareSoc appeals to you to join our campaign for a collective response on this scandal before the meeting on the 10th May where a vote is to be cast on PwC’s proposals. Please sign up on the link below so that we can pool our resources, minds and voices together to prevent this injustice and scandal from happening!’

If you wish to take part, you can access the campaign here.

ValueTheMarket.com is also currently working to help secure full representation for clients at the Beaufort Securities client and creditors’ meeting on 10 May at The Platinum Suite, ExCeL London.

A five person-creditors’ committee will be put together at the meeting, and we know of two suitable clients well known amongst retail investors who are putting themselves forward.

These are David Kipling and Value Generation Limited (directed by Paul Johnson).

If elected they will be in a position to ask the questions you want answering, and both Paul and David have said they are willing to receive questions from clients collated by ValueTheMarkets.com.

We believe it will be more useful for a set of logical and cohesive questions to be put to PWC collectively.

If you are a client and have any questions you would like answered by PwC, please email them to: [email protected], and we will pass them on to Paul and David.

In the event more than three clients put themselves forward for the committee, there will be a vote at the meeting. If you can’t attend and wish to vote for DAVID KIPLING or VALUE GENERATION LIMITED, you can do so by returning –> this form before noon, 9 May 2018.

You can also give David Kipling or Value Generation Limited the opportunity to vote on issues raised at the meeting by making them your proxy.

It’s simple to fill out the form (example below), and it can be returned to: [email protected]; or Beaufort, 63 St. Mary Axe, London, EC3A 8AA

If you wish to go to the meeting, the same form should be sent notifying your intention to attend. 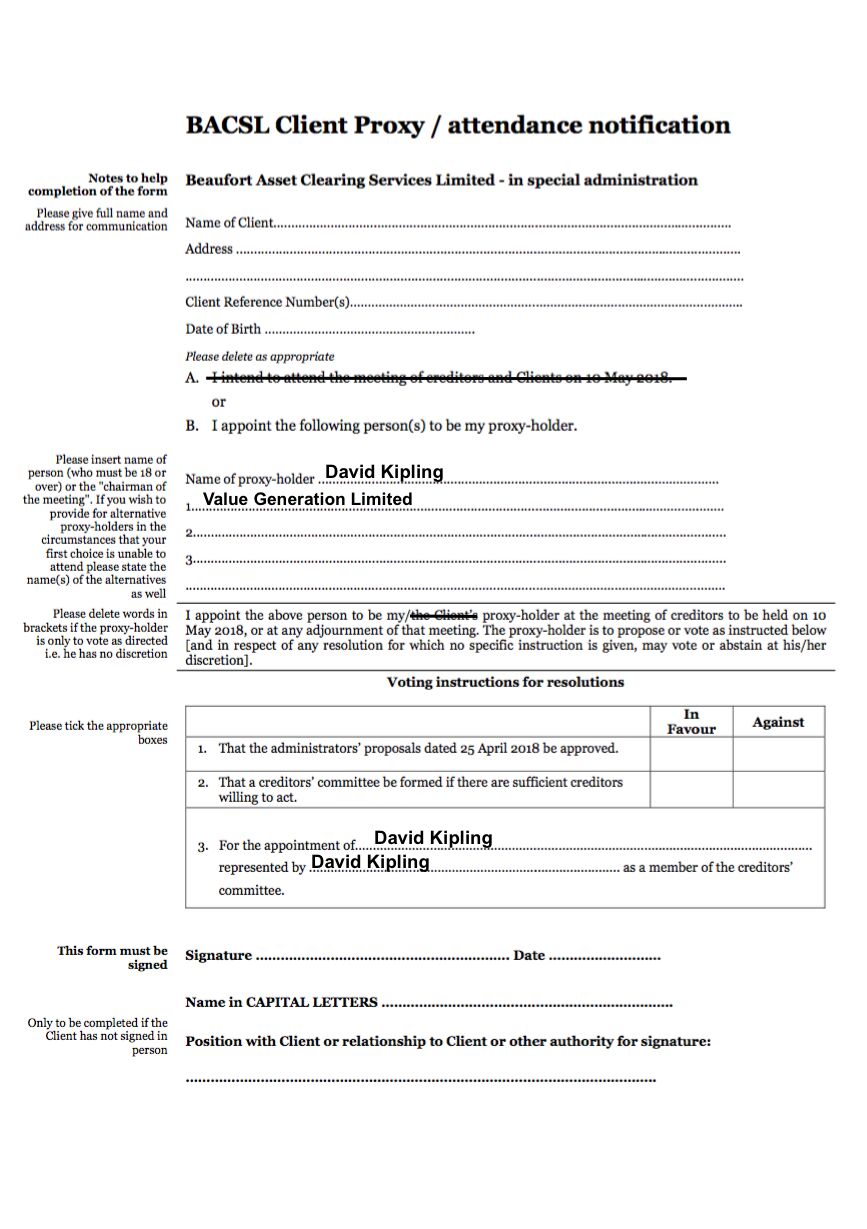