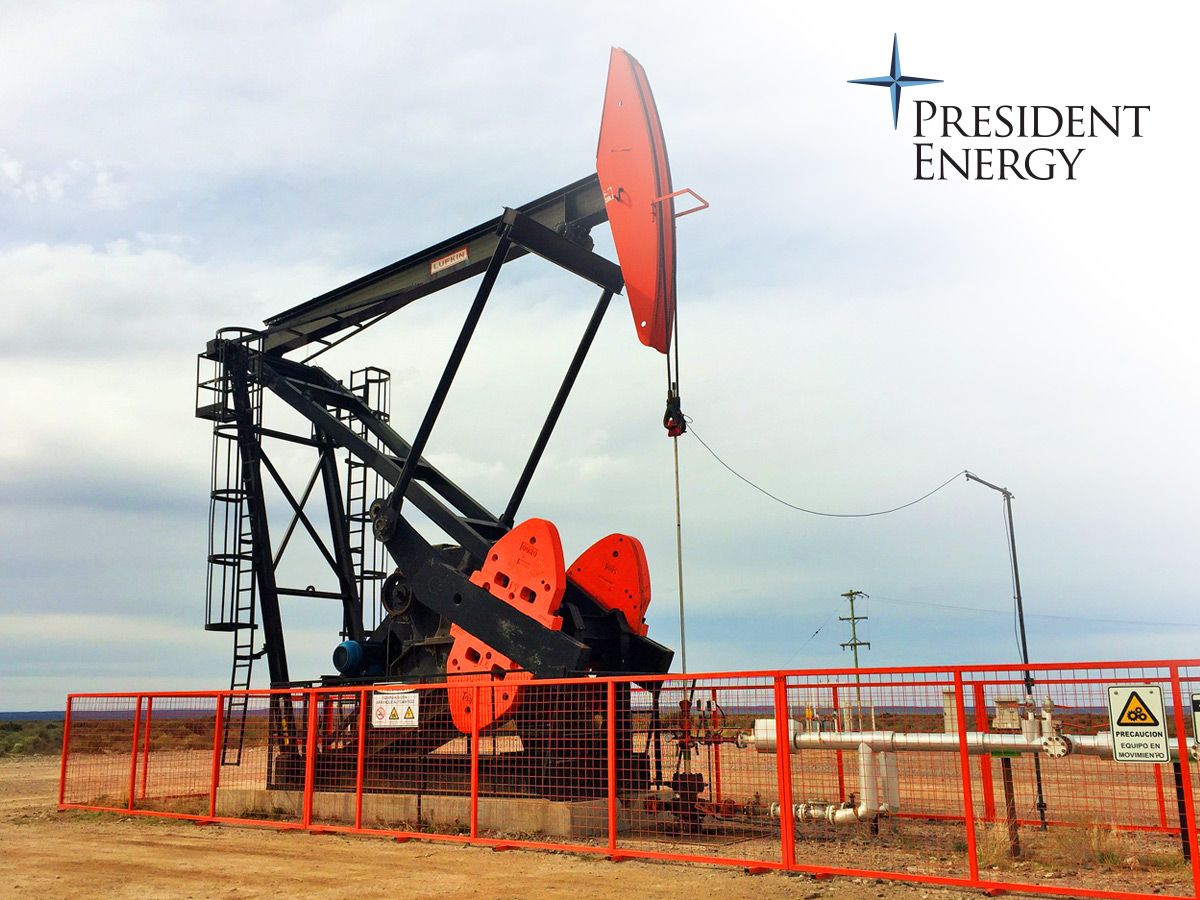 Since ValueTheMarkets.com last spoke to President Energy (LSE:PPC), the firm launched itself headfirst into an accelerated work programme at Puesto Flores/Estancia Vieja, one of its key assets in Argentina. The oil & gas business decided to accelerate work following its successful four-well workover programme at Puesto Flores and the successful reactivation of a live gas field at Estancia Vieja. We caught up with chief executive Peter Levine to look at how President’s new work schedule and the recent weakness in Argentina’s currency could affect the company’s investment case.

President bought the Puesto Flores/Estancia Vieja (PF/EV) field last September, with the aim of hitting 3,000bopd of production over three years. As a result of workover efforts, production recently hit 1,700bopd and net 1P reserves across PF/EV as a whole increased by 30pc to 4.5MMboe.

The first stage of the accelerated programme has seen President begin a three-month-long, seven-well workover programme at Puesto Flores, expected to cost $3m with an anticipated payback of under one year. The plan includes remedial work on three wells, workovers on non-or-low-producing wells and the perforation of potential hydrocarbon zones.

Following this, President plans to carry out an accelerated drilling programme at Puesto Flores in September, which will see it drill three new wells instead of just one, as initially intended. The two development wells and one appraisal well will cost the firm £3m each from existing resources.

In conjunction with the work at Puesto Flores, President plans to begin long-term testing on up to four gas wells at Estancia Vieja in June. The results will be used to determine how much gas is present in the field and how to monetise it. Beyond this, the company plans to drill its Puesto Guardian Concession next year to increase production from around 600boepd to an estimated maximum of 1,200boepd.

Levine told us President decided to step up its rate of work because it had the financial capacity to do so and the right macro conditions were in place:

‘Improving oil prices and Argentina’s active energy market have meant there is no time to waste. We have the money, so why not capitalise on it. There is a lot of work to be done here, and everyone is extremely busy; effectively we are doing most of the work for the programmes of 2018 and 2019 by the middle of Q4 2018. Everything is heading in the right direction.’

President remains one of the only ways for AIM investors to get direct exposure to Argentina’s economy as it continues to grow. As a result, some investors are likely to have been concerned by the collapse of Argentina’s currency, the peso, in recent weeks.

After losing more than a quarter of its value against the US dollar over the previous 12 months, the currency has sunk to new record lows in May and is currently hovering at around 23 pesos to the dollar. The fall has come despite significant state intervention, with Argentina’s central bank spending around $4.3bn in five days to defend the currency as well as hiking rates by 3pc to 40pc.

Argentina is suffering from growing fears that President Macri will not be able to deliver on his promise to bring down inflation from a whopping 25pc. These fears have stemmed partly from the worst drought the country has seen in five decades, flooring its thriving agricultural sector and, in turn, harming efforts to curtail sizeable national trade and fiscal deficits.

Argentina’s central bank has managed to temporarily halt the peso’s plunge by selling up to $5bn of reserves and requesting assistance from the International Monetary Fund to improve its liquidity. However, these are controversial moves and, while they may improve things over the short-term, it is likely that investors will continue to pull money from Argentina until more concrete plans are in place.

Despite Argentina’s troubles, President reassured investors earlier this month that the exchange rate has led to ‘no current or envisaged material adverse changes’ to its financial position or prospects.

It added: ‘President agrees, sells and gets paid for its oil and gas monthly on the basis of a dollar value for which payment is receivable in pesos at the prevailing peso/dollar exchange rate calculated at the date the monthly monies are actually paid; for example, for oil production in the month of April from Puesto Flores, President received US$66.5/bbl converted to pesos at the time of payment for the oil.’

Levine reiterated this point when we spoke:

‘Argentina is still healthy. People are afraid of the peso, but from our point of view we are getting on with things and making money, it is not affecting our business as we don’t have direct exposure. We are pleased with how the government has dealt with it and are very supportive. Oil prices have continued to rise regardless, and the industry continues to blossom in Argentina.’

In fact, Levine believes the peso turmoil overshadowed the news last week that Argentina’s congress has passed its government’s capital markets bill. The bill sought to reduce the power of market regulators and loosen restriction on funds investing in Argentina, potentially prompting the country’s promotion into the MSCI Emerging Markets index this June. Such a move would open Argentina up to a wide range of more risk-averse investment funds- indeed, the country’s stock market jumped nearly 6pc in response to the news.

Levine believes the passing of the bill further strengthens President’s case for seeking a dual-listing in Argentina, something it plans to do by the end of summer this year:

‘Our IPO in Argentina is progressing and we are very enthusiastic about it. We are doing this to boost President’s international profile and improve liquidity by appealing to a different audience of domestic investors who want to invest in an Argentina-focused company that is governed by world standards.’

Since coming into power, Argentina’s president Mauricio Macri has been encouraging domestic energy production through subsidies and fiscal stimulus in a bid to address over-reliance on imported hydrocarbons. These reforms have benefitted energy firms that operate in the country and, as a result, President has found itself working alongside major players like Exxon, Shell, Total, and BP.

When we last spoke, Levine said there was an opportunity for President to consolidate the conventional producing assets in Argentina that these major oil players are disposing of as they look to focus on shale.  Today, he tells us this is still the case. However, he adds that the business is by no means in a rush to follow up last year’s acquisition of Puesto Flores/Estancia Vieja, having set the bar so high:

‘We are not making acquisitions for the sake of it, but I have no doubt we have significant growth over the coming period. PF/EV has been an excellent acquisition, and we need to follow that with something that is value accretive. We are still looking for that and are not necessarily restricting ourselves to Argentina either.’

He says one problem is that many private owners of assets in Argentina are asking for full-value despite failing to provide the same amount of prior investment as larger companies:

‘There are opportunities on the market, but frankly, a lot of them are over-priced. We have kissed a lot of frogs, and a lot of those are poisonous frogs. We are looking for an acquisition that will not adversely affect us. It is very easy to do a bad deal, and it is very easy to overpay because Argentina is developing and people have wildly differing ideas about value.

‘While there are a lot of opportunities from majors who are divesting, there can also be a lack of sophistication in the market. Many family-owned organisations bought into oil and gas four or five years ago because it looked like a one-way bet. Prices came off pretty soon after that and now that oil is back up to $70 these owners are thinking about selling. However, they have not invested fully in their assets because of the environment, and we are not willing to pay full value for an asset that needs a lot of work.’

President’s upside looks even stronger now that it has decided to accelerate activity at PF/EV. Financially, it remains robust, with all upcoming work funded by existing reserves. The company also continues to have the backing of a sturdy shareholder base rooted with Levine himself alongside the World Bank.

President expects its Argentinean EBITDA to jump from around $28m in 2018 to more than $40m by 2020, with production expected to reach nearly 4,000boepd in the country by 2020- almost double its current level. Through near-term development at its existing assets, President hopes to become a mid-size Argentinian oil producer by year-end.

With oil and gas prices continuing to strengthen and President potentially unlocking a substantial gas opportunity in Estancia Vieja, these goals look achievable. The question comes down to how the market will react as President continues to deliver news- this could be complicated by Argentina’s rocky macro situation. That being said, if everything continues to go President’s way it could continue to advance from its current 10.25p share price.