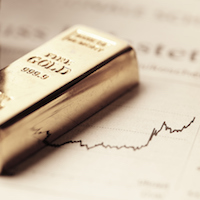 The gold price has been dropping over the past few months after failing once again to break out above a long-term resistance line that’s pinned in the price for the past few years. There was much bullishness regarding gold a few months ago, but sentiment has fizzled, with the metal losing its battle against a year-long support line last week. Is it down to the strengthening dollar?  Maybe not, at least not completely. The timing of the dip is arguably not surprising – gold prices are seasonal.

A look at the chart below, which uses data from 1973 to 2015, reveals a general dip in return from gold starting in March and running through to August, with September standing out as the best month to be invested in the precious metal. When the gold price dips in March, a ‘spring rally’ often ensues before a summer lull.

Gold production is steady through the year so it’s cause must rest on the demand side. The theory goes that cultural events are the driving factor. Indian Wedding season is in the Autumn after which the period before Christmas sees an increase in demand in the West. Strong gold buying from China occurs around the Chinese New Year which takes us into February, after which a strong drop in demand and price occurs in March.

At the time of writing the gold price is fighting to stay above a key diagonal support line around $1271. This follows the failure of year-long support last week when the price broke out to the downside from an ascending triangle (blue).

According to the seasonal trend, gold bulls may face another month or two on the backfoot. If current support isn’t enough, even longer-term support may be called upon. That diagonal support line (in red) stems from the lows of November 2015 and currently sits around $1225. There is one decent horizontal line of defence at $1241 that might hold the fort but I suspect eyes will be on the major diagonal support to stop the rot.  Another indicator to keep an eye on is the Relative Strength Index (RSI) – it’s still very much in a downward trajectory at the moment.

One positive to take from the chart is that all the while the gold price has been battling away trying to break up through long-term resistance (in red), an even longer-term diagonal resistance line (orange) which dates back from the all-time highs of 2011 has been creeping lower. At some point that line will surely be broken, opening up potentially much more upside – perhaps it will be a case of third-time lucky?