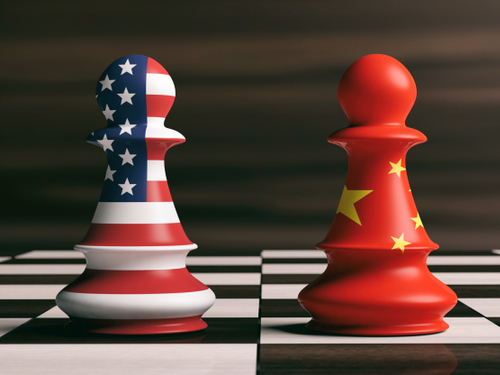 Global markets may have regained some poise today after suffering on Wednesday as the US ratcheted up the stakes in its potential trade war with China, but analysts at UBS have warned that things could get much worse.

Today saw the Shanghai Composite close up 2.2pc and Japan’s Nikkei finished 1.2pc ahead while European markets all looked relatively healthy in mid-morning trading, with the FTSE 100 up 0.6pc. As at the time of writing, US markets had yet to open, but the dollar had risen to a six-month high against the Japanese yen following inflation data that bolstered the case for more Fed rate hikes this year.

This relief marks a stark change to the risk-off attitude on Wednesday that led to wild tailspins across markets around the world that saw China’s indices suffer their worst day in two and a half years. Stocks fell after the Trump administration said late on Tuesday that it will push ahead with plans to impose new tariffs on $200bn worth of Chinese imports, targeting products from numerous sectors.

The US said it had no choice but to make the move after China failed to respond to its concerns – first raised in May – over unfair trade practices and abuse of American intellectual property. The measures add downward pressure on China’s economy from a slowdown in infrastructure investment and reduced subsidies for the property market.

Not only did yesterday’s move prompt investors to worry about how China would retaliate, but it also led US multinationals to warn that the impact of the measures would outweigh the benefits of Trump’s tax cuts. The prospect of a sustained trade war between the world’s two biggest economies also rattled commodity markets, with China currently sitting as the biggest consumer of almost all metals.

Copper and zinc prices hit lows for the year while London mining stocks like Glencore, Anglo American, and Rio Tinto – all exposed to China’s economy and its potential retaliation – sank by around 3pc. Meanwhile, Brent crude dropped by $5.46, or 6.9pc, to settle at $73.40 a barrel. With Libya also announcing plans to boost production, this marked the black stuff’s largest one-day percentage fall since February 2016.

While today’s rise may offer investors some much-needed breathing room, investment banking giant UBS believes this respite could only be short-lived. It said that if the US and China enter a full-blown ‘trade war’ scenario, where the US imposes all the actions it has so far threatened and China retaliates as expected, then markets could really suffer going forward. This model assumes that the US would go on to place a 30pc tariff on virtually every Chinese product landed in the US, leading China to retaliate accordingly, and so on.

UBS predicts that, in this case, global GDP growth would fall by 1pc and inflation would rise by 0.3pc. It expects the biggest losers to be the US and China, who would see their GDP fall 2.5pc and 2.3pc respectively. A full-blown trade war would plunge US equities into deep bear territory, with earnings fall by 15pc while Asian equities can expect to fall 24pc, and Europe by 25pc, meaning UK investors are all but out of the woods. It should be noted that things don’t look great for the US even under the current, planned 10pc tariff on China, with UBS’s modelling suggesting that the S&P500 will fall 10pc.

There are plenty of other consequences of a full-blown trade war, too. UBS says global interest rates would fall, US 10-year bonds would drop around 50 bps, and US rate rises would leave the table. Lower growth would then lead demand for oil to fall by around 500,000bopd, which would see prices fall back below £60/bbl.

On the research, UBS said: ‘That the negative impact on US growth is larger than any other country may be counterintuitive, but it is a function of fighting on many different trade fronts and a large drag coming from much lower oil prices. The negative income effect from weaker export growth would lower corporate profits and wages, and weigh on household consumption and fixed investment.’

Here is a chart, courtesy of ABC news, to demonstrate UBS vision of a full-blown trade war: