On Monday Widecells Group (LSE:WDC) announced the full launch of its Cellplan insurance product in Spain, providing cover for cord blood stem cell transplants. We have discussed the company’s expansion plans previously on ValueTheMarkets.com, which if achieved would create significant income compared with today’s £2.8m Market Cap. In May, Widecells soft launched the insurance plan to new clients of Stem Cell Banco Celulas Madre, S. A., an established provider of stem cell storage services, with a 100% conversion rate. The reason for such a high rate of take-up of this insurance product is that although storing stem cells is relatively affordable at around £2000, treatment can cost as much as £300,000.

The sample was for just 20+ new clients in that period but consider the fact Stem Cell Banco Celulas Madre has 22,000 existing clients and the revenue potential is plain to see. With Widecells keeping between £50-75 on each policy activated, income from this source alone could be £1m annually. Now extrapolate this result over other territories and scaled-up operations offer huge returns. The company reports that positive progress continues to be made regarding the launch of CellPlan in Brazil, Thailand, India and Singapore as part of the Group’s agreements with leading Brazilian storage facility Hemocord Clinica Medica Ltd and Asia-Pac focussed Cryoviva Group.

The share price collapse of Widecells has largely been down to a delay in generating these revenues and some fundraising issues in the meantime. A placing at 3p, which included a Live Market Bookbuild on the Teathers App – allowing existing shareholders the chance to participate – raised a total of £2m in May. This included a cash injection of £183k from the directors of Widecells.

There have been some Board changes, bringing in Dr. Lea to take the role of Chief Operation Officer. The company states in the RNS announcing the appointment that “Dr. Lea has extensive sales and management experience and success in delivering tangible financial, operational and efficiency-driven improvements within the healthcare sector”. That should hopefully put the company in a better position moving forward with regard to the management of its financials.

With sentiment having hit all-time lows recently, the share price is now at 2.06p, offering a full 50% upside before it even returns to the placing price of 3p. The share price chart appears to offer a wealth of upside after such a catastrophic fall. Should the company provide evidence that it can deliver on its aims and generate these significant revenues, today’s share price could be a real steal! For starters, there are two obvious targets derived from gaps down, one to 4p, the other to 9.5p – for some reason, unbeknown to me, gaps do tend to get filled more often than not. Multi-million-pound annual revenues could easily justify a share price in excess of these levels and in this short piece we’ve only touched on potential revenues from the insurance arm of Widecells. 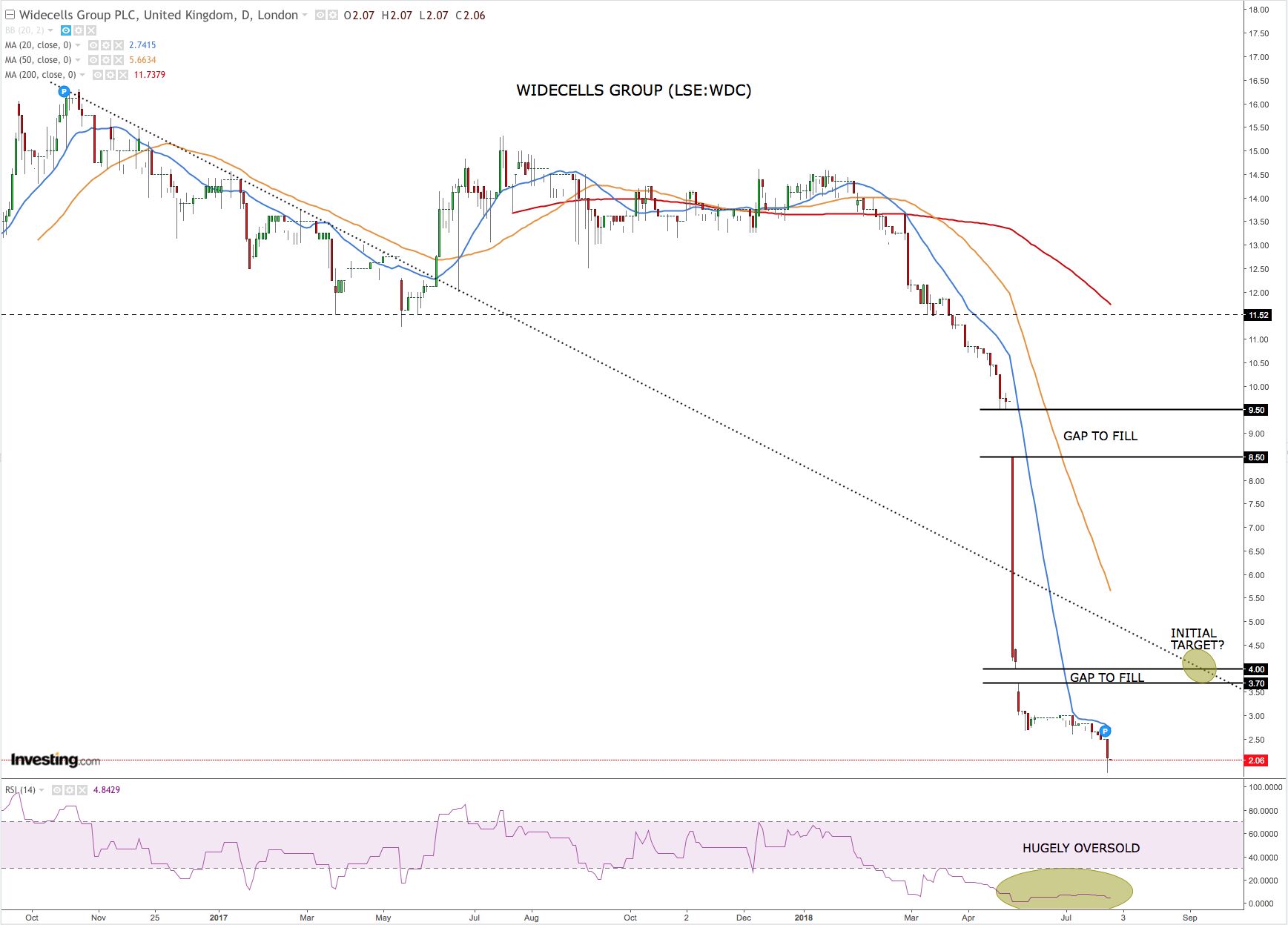