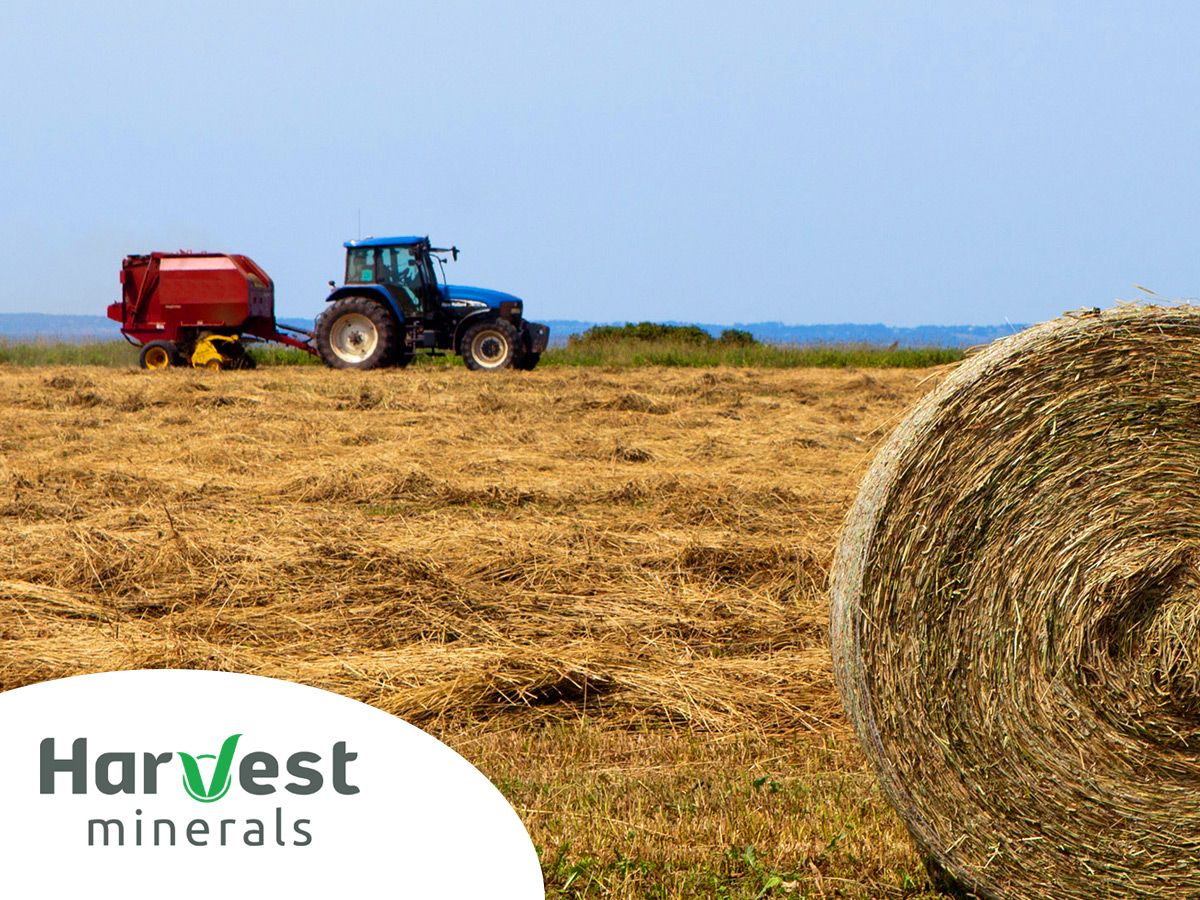 With its shares rising by around 63pc since last August to hit 16.3p, fertiliser firm Harvest Minerals (LSE:HMI) has sowed the seeds of its own growth through a focused approach to Brazil’s booming farming industry. Over the last few months, the business’s early efforts have started to properly pay off, with its flagship KPfértil remineraliser receiving government approval as significant orders and strategic alliances fly in. As Harvest prepares the necessary steps for the next stage of its growth, we caught up with executive chairman Brian McMaster to discuss the company’s plans to become a ‘major player’ in Brazil’s potash market.

Harvest’s flagship product is a multi-nutrient natural fertiliser called KPfértil, which it makes at its Arapua site in Brazil’s agriculture belt. As well as housing a processing plant, Arapua is the site of a shallow mine holding a 13.1Mt resource containing 3.1pc potassium oxide and 2.5pc phosphorus pentoxide, two essential stash elements.

This year has been a landmark one for Harvest so far, with KPfértil taking some critical steps forward. In June, the firm bagged an initial order of 36kt of KPfértil worth $2m from major fertiliser distributor Aggrocerado. Then, in July, it received approval from Brazil’s Ministry of Agriculture (MAPA) to register KPfértil as a remineraliser. Most recently, the company announced a strategic alliance with Geociclo, one of Brazil’s largest fertiliser firms. The deal will see Geociclo sell KPfértil to several geographical regions previously untapped by Harvest and also allows it to store KPfértil at Geociclo’s storage facilities, located around 450km from Arapua.

With this area falling outside Harvest’s current scope, McMaster says the alliance will bring manycost benefits:‘We have been focusing on a geographical region that stretches to about 150km from our base, so this will increase our reach by about 300km, a very significant figure. When we store product with Geociclo, it not only widens our potential customer base but it also reduces transport costs as we will now have access to a greater fleet of freight vehicles. The deal has given us a geographical reach that we could not otherwise have or expect.’

As part of the alliance, Geociclo will also grant Harvest unrestricted access to its MAPA-accredited research and trial production facilities. McMaster told us this access will speed up the development of any future products:

‘This access to Geociclo’s labs allows us to create products that can be created specifically for certain crops if a company asks us to, without the need to develop it through universities, which can be a time-consuming process. One of the areas where KPfértil comes into its own is that it is relatively cheap per tonne. Thismeans that blending it with other chemicals can give customers more bang for their buck without hitting effectiveness.’

To keep up with this growing demand, Harvest is working to increase production of KPfértil at Arapua, commissioning an enlarged 320Ktpa modular processing plant for the site in June following a £9.7m placing. Based on Arapua’sknown mineralisation, Harvest believe the upgraded plant will have enough material to produce at this rate for more than 100 years

McMaster says Harvest was a little behind schedule in installing the plant thanks to several issues out of its control, including a truck strike, but is now back on track. Regardless, he says the economic benefits of the additional capacity will be well worth the wait in the long run:

‘When in full operation, the additional capacity granted by the facility will see us through the next three or four years, based on current sales targets and pipeline, generating roughly $15m in profit. It also means there will be no more capex over the period. I see this as the major step towards us becoming a major player in the potash sector.’

At this point, it is worth noting that current drilling at Arapua covers just 6.7pc of total known mineralisation. This creates lots of upside potential, which Harvest plans to harness through Arapua’s modular plant design, which allows it to install further processing lines at a cost of $1m for each additional 320Ktpa of capacity.

Harvest is also well into the process of applying for a full mining licence at Arapua, where it is currently operating under a four-year trial mining licence. Although a full mining licence will have little effect on daily operations, it will last for Arapua’s entire life of mine, meaning licencing will cease to be a concern for the business. Harvest submitted the final application for its full licence to Brazil’s Department of Mines in July, and the government body now has up to a year to decide on whether to grant it. McMaster is confident it will:

‘We have submitted everything required of us. They have up to 12 months to assess it, andwe are not in control of that. However, there is no basis on which they will not grant it to us. We meet all of the criteria easily, andthe government of Brazil is focused on developing the industry, not holding it back. We will get the licence, butwe do not control when. It will be sometime in the next 12 months.’

In terms of fundamentals, there are few better opportunities in the potash market than Brazil. With a population of c.207m people, the country is one of the world’s largest consumers of fertiliser. Indeed, as it stands, agriculture accounts for 29pc of Brazil’s GDP and 46pc of its exports. The country’s use of fertilisers is also on the rise, increasing 4.9pc per year between 2005-16. However, despite this significantgrowth in demand, Brazil remains the world’s second largest importer of fertiliser, with 95pc of its potash and 60pc of its phosphate being brought in from beyond its borders. What’s more, this trend looks set to continue, with domestic fertiliser production falling 10pc throughout 2015-2017.

McMaster tells us he expects demand to continue rising, and expects Harvest to beableto take advantage of the growing domestic supply deficit when it does: ‘Demand is insatiable and growing. Indeed, around 50pc of all new added cultural land on the planet over the next five years will be in Brazil. It’s also a great jurisdiction with a skilled labour force and proven mining code. A lot of the world’s large potash players are now looking at how to enter Brazil, but we are already there.’

With these points in mind, McMaster said Harvest currently has no plans to move into other countries. Instead, it will look to continue expanding within Brazil, provided both the timing and opportunity are right: ‘There are certainly are someexcitingopportunities within Brazil, andwe look at everything very carefully. Once we have got the licence and processing capacity secured, I would like to see the business expand by doing some M&A activity. If the opportunity makes sense, weare open to looking at it seriously.’

June’s deal with Agrocerrado marked a significantstep towards profitability for Harvest. As we wrote at the time, the firm has previously reported all-in production costs of $7/t at Arapua. So, with Agrocerrado agreeing to buy an initial 36kt of fertiliser at $60/t, Harvest can expect to make a profit of $53 for every tonne sold. For the whole deal, thisequates to profit before tax of c.$1.9m, with further orders potentially in the pipeline.

According to McMaster, Harvest reaches profitability at sales of 30,000t of KPfértil a year and has already secured contracts for 90,000t. Furthermore, since the Agrocerrado deal, Harvest has securedMAPA approval and a criticalstrategic alliance. Itsrecent placing also means it is fully-funded for its near-term work plan. However, despite this strong news flow, shares have drifted from highs of 22.8p since May. Although he concedes this performance is somewhat disappointing, McMaster is confident that sentiment will change once the market sees revenues and profits start to roll in properly:

‘Three years ago, we had just picked this piece of land up and didn’t even know we had this asset. Now we are in development and generating cash; that is almost unheard of. I think that once people start seeing revenue coming through the door and cash coming in the bank, they will reallystart to clock the significance of what we have achieved. It is just a function of how quickly we can deliver it. Regardless, we expect to hit profitability at some point in this financial year.’

Despite a recent drift in its shares, Harvest’s performance over the last year shows its business model has begun to capture the market’s attention. With deal flowstarting to gather momentum and the firm looking at creative ways to expand its footprint, it will be interesting to see what impact future news has on shares. However, as McMaster himself puts it, the real test of the market’s interest in Harvest will be how it reacts when it begins to see revenues and profits coming in. If you think this will trigger a re-rate, then now could be a good time to have a punt.