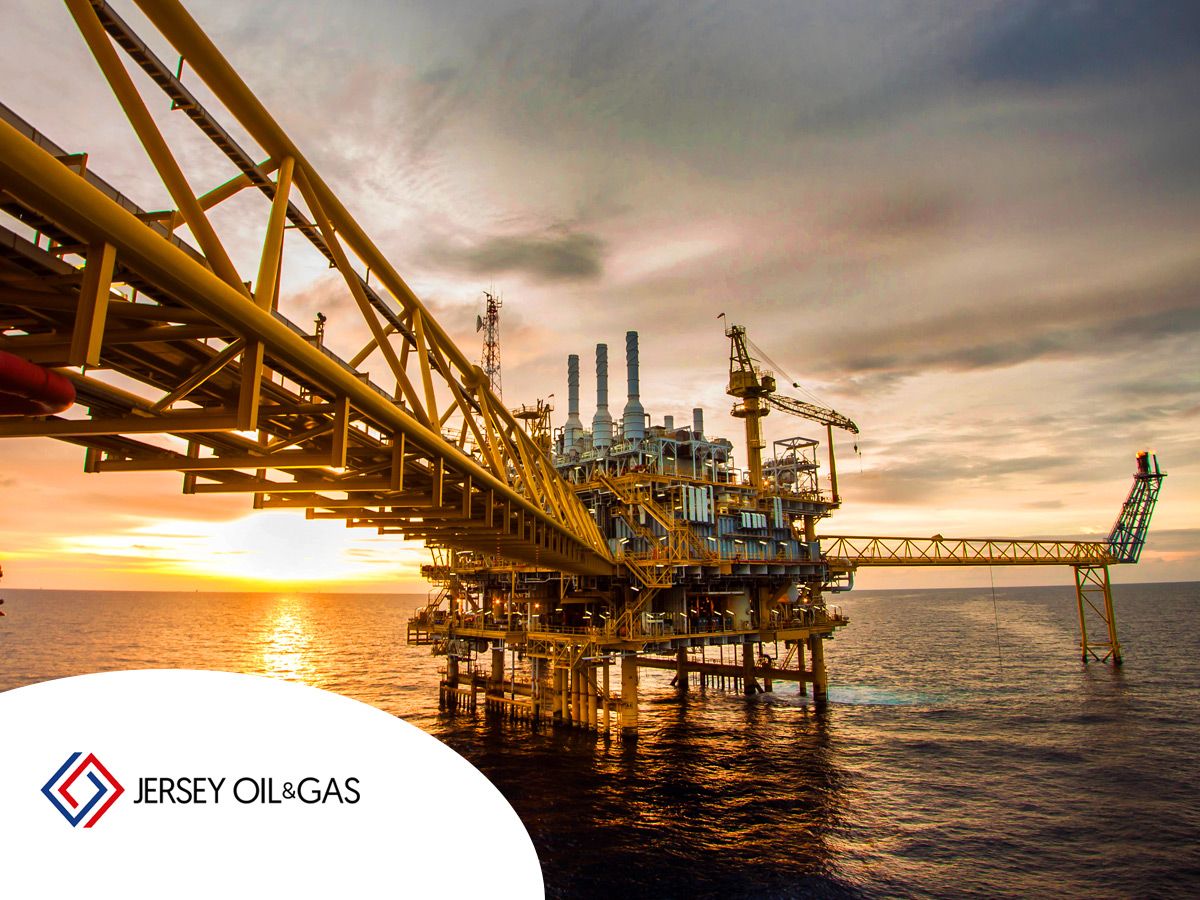 With Jersey Oil and Gas (LSE:JOG) continuing to drift lower following news of a delay in the drilling of its much-anticipated North Sea Verbier discovery last month, and the recent dip in oil price, could the firm be worth re-visiting at 173p a share?

Last month, the business fell 9pc after announcing that Verbier – and a possible accompanying side-track well – will now be the third target in a UK drilling campaign with its contracted West Phoenix rig, rather than the first. As a result, the well is now expected to be drilled in mid-to-late-Q4 this year rather than late-Q3 to-early-Q4 as previously advised. It added that the delay is not likely to result in any budget changes.

Given that this is only a two-month delay and Jersey has said that it will not impact drilling costs, one could argue that the change in sentiment since the news is being overdone. Presumably, the only additional expenses throughout the delayed period will be operational costs.  However, with Jersey boasting a 2017 year-end cash balance of £25m against costs of around £9-£11m for Verbier, it seems unlikely that it will dilute shareholders specifically to cover any additional expenses.

Investors should not forget that Verbier, in which Jersey owns an 18pc interest, is estimated to contain gross recoverable resources of between 25-130MMboe. Alongside fellow stakeholders Equinorand Cieco, Jersey plans to drill an appraisal well at the site to get a better idea of exactly how much oil it contains. If the site’s total reserves come in at the upper end of expectations, it would make it one of the most significant North Sea oil discoveries in the last 20 years.

Assuming continued success on Verbier, Jersey expects first oil to come from Verbier in 2022. If the partners pursue a standalone development scenario, Jersey has run notional economics with a peak of around 60,000boepd. It estimates that lifecycle costs under this scenario could be under $35 Barrel Of Oil Equivalent (boe).

Beyond this, as we have written before, Jersey boasts strong management, money for further exploration, and a stable operating environment in the North Sea. It is also benefitting from a backdrop of rising oil prices.

Alongside Verbier, it also has other exploration opportunities at P2170 up its sleeve. The most significant of these at present is the Cortina prospect. This site has estimated recoverable resources of 39MMboe in the low-case scenario, 123MMboe in the mean-case, and 240MMboe in the high-case according to an independent CPR commissioned last year.

The second, smaller opportunity is the Meribel lead, which has estimated recoverable resources of 6MMBoe in the low-case scenario, 13MMboe in the mean-case, and 19MMboe in the high-case. Other exploration opportunities across the block are being interpreted on the back of the Verbier success, leading to possible further exploration drilling during 2019.

As seen in the table below, collectively, Jersey’s three sites have projected valuations of £83.7m in the low-case scenario, £130.2m in the mid-case, and £400.5m in the high-case. With this in mind, it could be worth taking advantage of the calm before an expected storm.

A look at Jersey’s chart shows price action fell out of an upward trend channel on news of the delayed drilling of Verbier. The stock is currently sitting around the previous lows hit since the discovery. If we see a close below 171.60p then 167p is the second line of defence. In the event of a further pullback in the oil price, a visit to 160p is the potential downside here – that would also test the bottom of the more recent downward channel (purple) leading back to the high of 258p in May.

However, it’s likely it won’t be long before interest returns as anticipation starts to build again for the Verbier drill. With so much reward potentially on offer in the event of success, its possible a move above 300p could be achievable ahead of the all-important drill results. 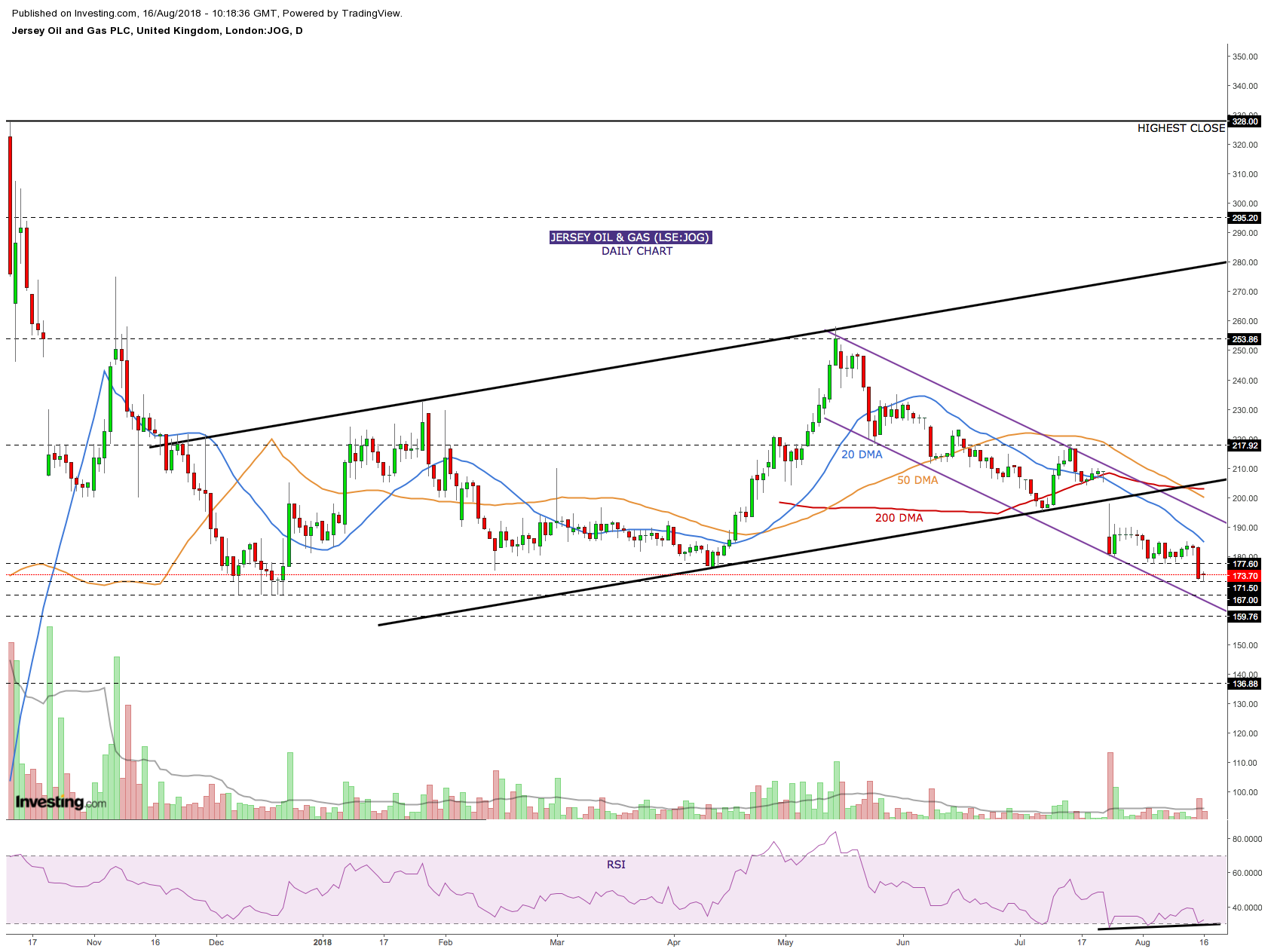