Last week saw South America-focused oil and gas firm Amerisur Resources (LSE:AMER) rise after announcing progress at its key Platanillo block in Columbia. After finding that a severe degradation of the cement sheath at its Platanillo-22 workover was holding back production, the firm said it successfully carried out a cement squeeze operation to recover the well.

It has now finished a full recompletion of the well and partially perforated it earlier this month, bringing current production to circa 360bopd at a low pump rate as water levels continue to decline steadily. The well will soon be fully perforated, and a pump increase will be performed to increase production.

Amerisur said it expects to mobilise its rig to drill another well, called Pintadillo-1, once it has completed the ongoing work on Platanillo-22. The N Sand anomaly at Pintadillo is one of four such anomalies identified in the central part of the Platanillo block and is estimated to hold P50 resources of 11.44MMbo. As a result of work at Platanillo-22, production in July was hit slight, reaching 150,911bbls, equating to 4,868bopd, with peak daily production of 5,119bbls.

Further to its updates on Platanillo, Amerisur said that its Chiritza re-pumping station project continues to advance ahead of schedule. It is currently installing booster pumps and control systems at the station and expects to commission it in September 2018, on budget and ahead of schedule. Once completed Amerisur will have access to a minimum daily carrying capacity of 9,000 bopd through the RODA system.

John Wardle, CEO of Amerisur Resources said: ‘I am delighted the Chiritza re-pumping station upgrade is on budget and ahead of schedule and am grateful to the Ecuadorian Government for their support in this complex engineering project. July production was impacted by the work on Platanillo-22, which to date has been successful. We are ready for the upcoming drilling programme and I look forward to updating shareholders on its progress.’

We highlighted the stock as a potential buy when it bounced off all-time lows of 13.4p earlier this month. As well as the potential double-bottom set-up, the price action has been forming an enormous Falling Wedge pattern over the past three years. The oil sector has recovered significantly and Amerisur is now stepping-up production again, lending fundamental reasons for a break in the downward trend of its share price.

Falling Wedge patterns usually result in a bullish move, and as a rule, the subsequent move can be as large as the height of the pattern. If this plays out with Amerisur, the potential upside indicated is almost 200% from today’s price of 14.5p. Currently, the share needs to close above 18.75p to break out of the wedge – obviously, this level is decreasing as it approaches an attempt to break out of the pattern. It’s also worth noting there is a gap to close at 18p from when the price fell back in June. 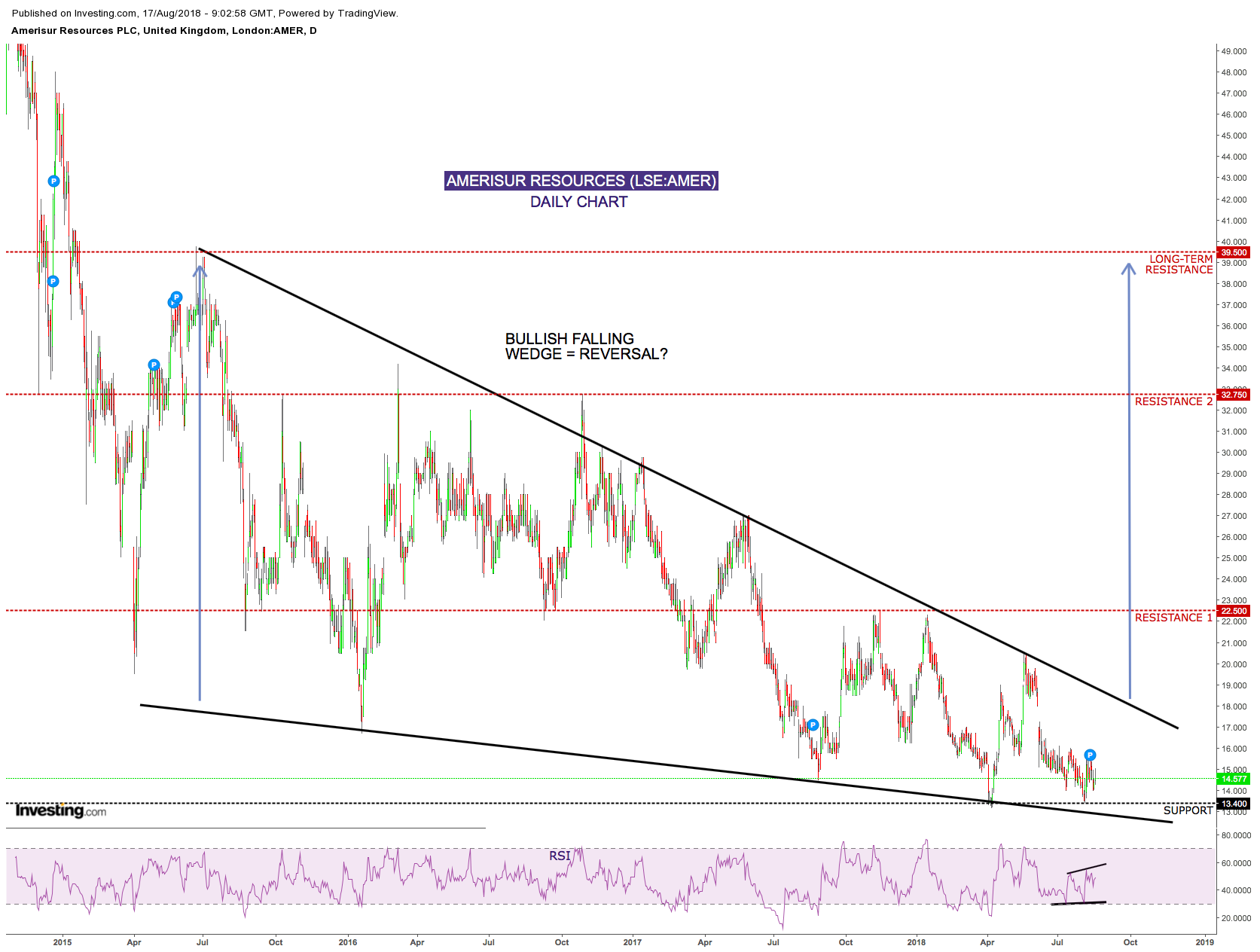