Despite Amerisur Resources (LSE:AMER) increasing year-on-year revenues by 93pc in H1 2018, production issues and a recent well disappointment have seen shares decline over the year to sit at their current 13.2p. However, with the oil and gas firm now gaining traction in its major Colombian drilling programme, chief financial officer Nick Harrison believes positive newsflow could soon see sentiment change. Here, Harrison talks us through the potential share price catalysts the market can expect Amerisur to deliver over the coming months before we look at whether the company represents a buying opportunity at its current price.

Although these figures imply a period of success for Amerisur, its share price has told a different story so far this year. Indeed, on the day of the results’ release, the firm sat at 15p, far short of the 22p it hit in January. So, why has this disparity arisen?

Among other factors, Amerisur’s decline this year has stemmed from a fall in production at its Platanillo field, where it has been carrying out a maintenance and well optimisation programme. This work temporarily disrupted production at several wells on the ground. However, the fall was most noticeable at a well calledPlatanillo-22, where a ‘severe degradation of the cement sheath’ severely hindered operations.

Amerisur’s total average monthly production began to fall as a result of the issues at Platanillo-22 in March. But they became particularly noticeable in May when production fell to 4,807bopd from 5,794bopd in April. By August, a workover had resolved the problem. However, Amerisur has decided to leave the well at a low pump rate for the time being, and company-wide production has remained between 4,800-5,200bopd as a result.

Harrison told us that Amerisur is now producing around 4,000bopd across the Platanillo field, a figure he describes as a ‘baseline’ level of production. Moving forward, he says the firm is planning further work to increase production at Platanillo-22. These efforts include the determination of long-term well parameters. However, as with all wells on the block, he says it is being careful not to cause long-term damage:

‘We need to be careful not to over-stretch these wells as this can maximise short-term production in exchange for sacrificing total long-term production. I would expect some modest production increases at Platanillo-22 and the other wells, but most of our production increases are going to come from new wells and exploration, where we have many opportunities. The important thing for us is that we are at a strong level of production from our current wells, and we do not see this coming down.’

Beyond existing wells, a significant focus for Amerisur is its fully-funded 2018/2019 drilling programme, in which it is targeting c.120MMbo.

Things did not get off to the best start here. Last week, Amerisur announced that the first well in the programme, Pintadillo-1, had failed to find hydrocarbons at its primary target, the N sand anomaly on its Platanillo block. The well, which spudded in August, was set to be the first of three targeting resources of 11.44MMbo at the N sands. Harrison acknowledges that the result, which led Amerisur’s shares to fall 19.1pc, was disappointing. However, he points out that the prospect represented under 10pc of the total resources targeted in the programme.

What’s more, although the N sands were dry, Amerisur did discover another hydrocarbon-bearing reservoir in the nearby T and U sands in the process of drilling. This week, the business announced that the T sand interval had flow tested under natural flow at 590bopd. With chief executive John Wardle claiming that choked production levels could see the well payback in under a year, Amerisur’s shares bounced 12.5pc, recovering much of the previous week’s losses. The company now plans to re-map the T and U sand targets to evaluate the size of the discovery so it can be added to reserves. It will then assess future drilling options. 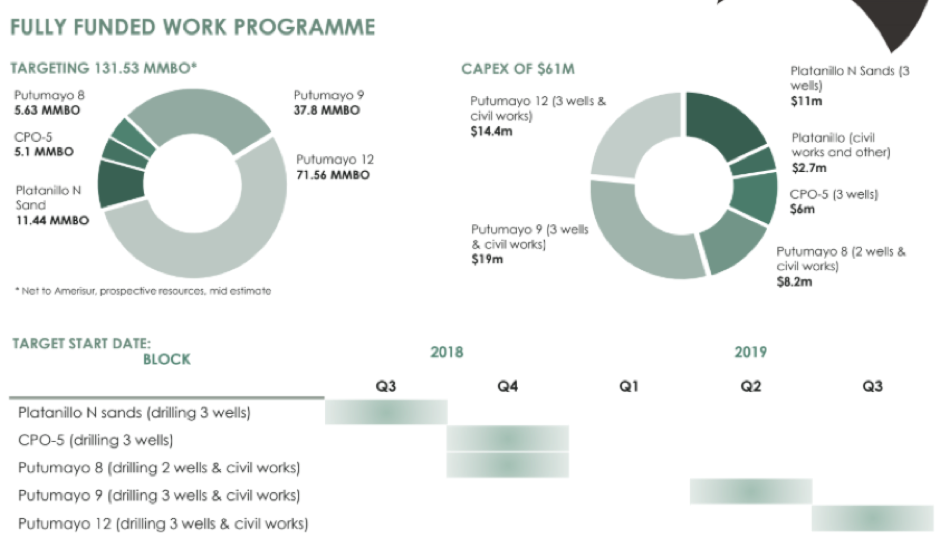 As can be seen in the diagram above, Amerisur is now moving forward with the drilling of up to five further wells before the end of the year. The first of these, Indico-1, is due to spud in the latter half of this month at Amerisur’s 30pc-owned CPO-5 lease. The business is targeting a net resource of 5.1MMbo at CPO-5 and plans to drill two more exploration wells by year-end on separate structures. Harrison tells us the plan is for Indico-1 to perform in line with Amerisur’s existing Mariposa-1 well on CPO-5, which produced at an average rate of 3,200bopd in H1, 960bopd net to Amerisur:

‘If Indico-1 indicated the possibility of replicating the success we have enjoyed through our non-operated interest at Mariposa, then we should be able to get it on test pretty quickly. Following this, we hope the two remaining CPO-5 wells can be drilled pretty much back-to-back in the fourth quarter.’

Amerisur’s final scheduled activity for 2018 is the drilling of two wells at its 100pc-owned Putumayo-8 site, where it is targeting 5.63MMbo. It has all the necessary environmental approvals in place to start work here. However, it must now get permission to drill the wells from an adjacent pad called Cohembi 2, which the prospect borders. Harrison is confident that this will not be an issue: ‘We expect to get these approvals over the coming weeks. The first drill will determine if the second is drilled from the same pad or on the block itself.’

‘We plan to start at Putumayo-9 because it has easier access and we can easily tie wells directly into our OBA pipeline, creating an easy path to monetisation. We can also do this at Putumayo-12, but we expect it to take a little longer. However, we are very excited about the huge resource potential on offer.’

Fortunately for investors, Harrison tells us that there is unlikely to be a ‘hiatus’ following Amerisur’s current drilling programme.

To date, Amerisur has focused on the assets in its ‘OBA cluster’. These are the fields that are closest to its strategic 100% owned OBA oil transfer line into Ecuador and offer the quickest and cheapest path to monetisation. But the firm also owns a huge amount of additional acreage in both Colombia and Paraguay. Harrison tells us the company is already progressing much of this acreage to increasing production over coming years:

‘We took advantage of a market downturn a while back and built up a substantial portfolio at a very low cost. Our immediate priority over 2018/19 are the prospects in the OBA cluster. However, this by no means implies we are ignoring the other blocks. On the contrary, we are doing things like environment permitting and initial surveying. They are not quite as ready for drilling, but they will gradually become a core focus.’

As at writing, Amerisur’s shares sit at 13.2p, giving the business a market cap of £141.7m. Based on net current assets of c.£33.3m ($43.4m), the market currently values Amerisur’s portfolio at c.£108.4m. This figure translates to just over one year of current revenues, based on the firm’s recent results. Given Amerisur’s growth plans, there is, therefore, an argument to make that this recent weakness presents a buying opportunity.

However, existing investors are more likely wondering what could trigger a sustained re-rate or change in market sentiment. In the near-term, Harrison believes this is most likely to stem from continued success in its drilling programme:

Given that the programme only began in August and many wells are left to drill, any success is unlikely to have a material financial impact in the current results period. Harrison told us the positive effect of any drilling success is likely to become more evident in its results for H1 2019:

‘It hard to say whether profitability will improve by year-end as this will largely depend on exploration success. If we look at the timing of the programme and what is being drilled, most of the benefits of the drilling are likely to be delivered towards the end of 2018, so we will likely see the full benefit next year. We are already a strong and cash generative organisation, and I do not see that position changing any time soon, so we are very hopeful moving forward.’

As Harrison says, Amerisur’s recent performance has been disappointing. What’s more, the negative reaction to what appear to be minor setbacks within the company’s broader narrative is somewhat concerning.

However, the business has a very stable footing through its current production, revenues, profits, and healthy cash balance. With many targets remaining in its current drilling programme, the potential catalysts for a shift in market sentiment to better reflect the firm’s position are numerous. In this vein, the bounce in Amerisur’s shares this week following the T-sands flow test results is highly encouraging. If you are confident that Amerisur can continue to deliver here, then its currently depressed valuation weakness could provide a decent buying opportunity.