Amerisur Resources (LSE:AMER) was up as much as 30% in trading on Friday after announcing a farm-out worth $93.25m. The deal is with Occidental Andina, an affiliate of Occidental Petroleum Corporation, that has operations in the U.S., Middle East and Latin America. The farm-out blocks are all in the Putumayo region in southern Colombia, and, as chief financial officer Nick Harrison explains to ValueTheMarkets, the deal will accelerate exploration and appraisal with minimal outlay from Amerisur in parallel with the company’s existing drilling programme.

Amerisur was fortunate to be in excellent shape when the oil sector downturn took the industry by surprise. While many other companies struggled, increasingly burdened with mounting debt, Amerisur was cash rich and primed to take advantage. The company strategically acquired attractive assets at low cost, managing to build a significant acreage position at a total cost of around $20m.

Harrison says that the company reviewed its programme around six months ago and realised that the near-term exploration it was going to fund surrounded the OBA and the Platanillo block. It concluded that some of the substantial resources it had acquired further afield were unlikely to be developed until it had harvested the ‘lower hanging fruit that was close by’. The solution was to bring in a partner that could help accelerate the programme.

The blocks identified, which include Putumayo-9, Terecay, Tacacho, and Mecaya, have gross prospective resources of around 600MMbo but require considerable investment to shoot seismic and pinpoint potential drilling locations. The company wishes to prioritise its current cash resources on lower risk assets that are most likely to turn into production and cash flow more quickly.

Harrison says Amerisur had ‘a lot of interest’ in the blocks before agreeing the deal with Occidental. The previous owners, Pacific, had undertaken the social consultations required to shoot seismic, in Terecay and Tacacho, meaning it can complete straight away.

“The plan is to start a seismic programme in 2019, probably starting in Tacacho and then moving on to Terecay with a view to drilling in 2020,” said Harrison.

Occidental Andina is to fully fund five exploration wells at an estimated cost of $38m and will pay 85% of the total costs for the acquisition of 878km of 2D seismic – estimated at $55.25m. But it is not just financing that Occidental brings to the table.

“It (Occidental) is not going to be sleeping partners in this; it has dedicated a significant technical resource to be working on this program over the next two to three years. Although we are operator, it will do its technical analysis and have its views on the programme. Being able to have a partner pay for that seismic means we conserve our cash resource for drilling in our prospective area around the OBA.”

There had been a delay in drilling Putumayo-9 which will now happen next year. Seismic has been shot, and now Amerisur has a partner funding the first well of a three-well programme.

“Typically, your first well in a three-well programme is generally your most risky because you only drill wells two and three should one be successful.” Harrison highlighted. 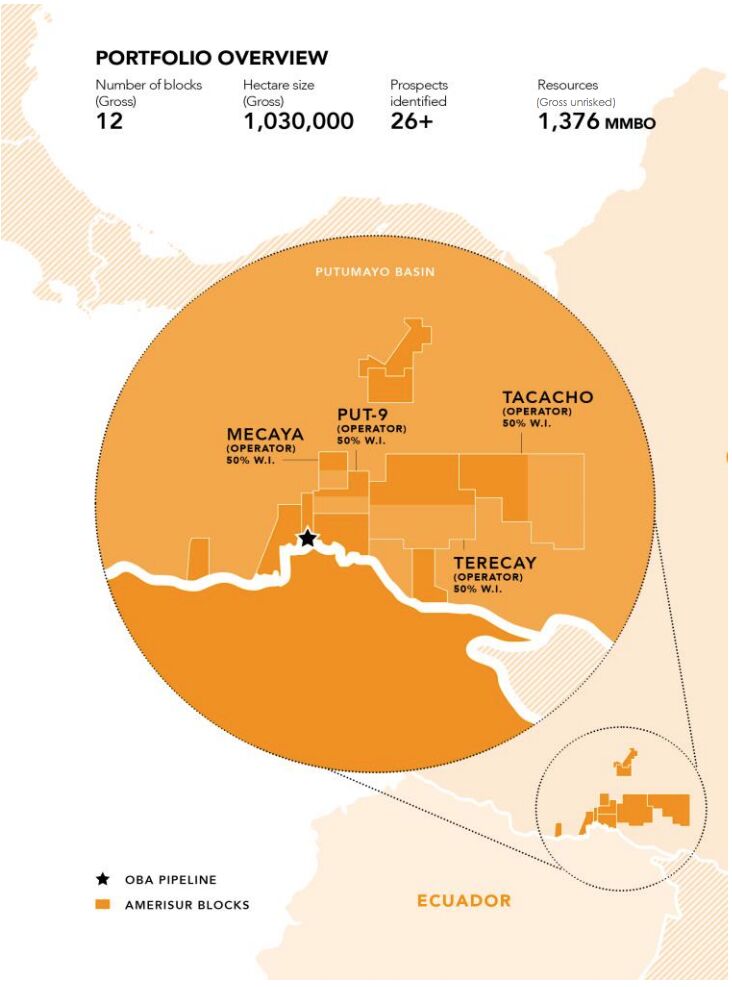 Ahead of the deal with Occidental, Amerisur acquired a 100% working interest in the Mecaya block. This had two benefits, as Harrison explains:

“To a certain extent, the acquisition of the Mecaya block was a little bit of a tidying up exercise before we did the Occidental deal. We wanted the deal to be clean, so it was 50/50 for all three blocks. We had a 15% working interest (in the Mecaya block) that would grow to 58% if we spent around $8.5m on the programme. We were able to negotiate with the other partners in the Mecaya to relieve us of our obligations to pay for the work programme. We would give them a little bit of cash up front; then we would give them some more cash out of production and then a small royalty if the well was successful. So, it very much was a win-win situation for us as it took away the obligation to pay $8.5m of potentially risk capital in terms of the exploration programme. We got 100% of the block and only have to pay the bulk of the money if the programme is successful. If we’re producing from those wells, they will get some money, but potentially in cash terms, it is not as much as they would have with the carry, although they do have a royalty down the road.”

Amerisur also had the forethought to invest in the OBA, a strategic piece of infrastructure that substantially reduces oil transportation costs. The OBA currently has a minimum throughput of 9000 bopd and all the while Amerisur are producing less than this, the company can generate revenue from piping third-party oil.

The board seems very confident that the share price is not reflecting the real value of the company, with several director share purchases including 500,000 shares bought by chairman Giles Clarke, 150,000 shares bought by non-executive director Chris Jenkins, and a large purchase worth nearly £1m by Tracarta Ltd, a company in which Amerisur CEO John Wardle has an interest. Predictably, Amerisur’s share price has reacted positively to the director buys and the stock is now showing signs of a reversal having strongly bounced off support correlating with the seven-year low from 2011.

The stock price has proven to be a difficult ship to turn around for Amerisur, despite a decent 12-months of operational activities and a promising set of half-year results detailing a 93% increase in year-on-year revenues. The main negatives causing drag on the stock this year have been a fall in production at its Platanillo field, which has required some maintenance, and the drilling disappointment at Pintadillo-1 in September, with the company failing to find hydrocarbons at its primary target. 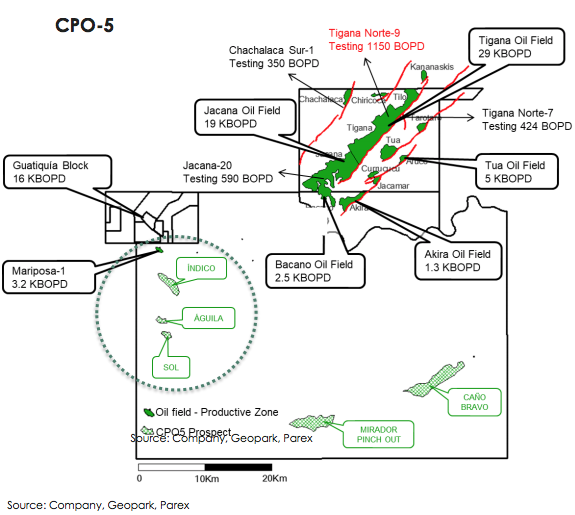 However, investors may have been caught shortsightedly looking at the headlines and not the bigger picture. The company is well positioned financially, has made steady operational progress, and there is plenty of exploration activity still in the pipeline. Drilling is currently underway at the Indico-1 well on the CPO-5 block, and Amerisur has stated the drill ‘is proceeding satisfactorily to plan and budget’ in its operational update on Wednesday.

“I think the next near-term drilling results are likely to come from our CPO-5 block in Llanos. Earlier this week we announced the drilling of the Indico well was progressing well and we expect results in the next few weeks. That will be followed on by another well, ‘Sol’ further down that block, and potentially a fourth well which would be next to the Mariposa well that has been most successful for us this year.”

The Mariposa-1 well was drilled in May 2017 and is currently producing 3,200 bopd. Production has been stable for the past year, and Harrison tells us there has been no drop in well-head pressure ‘which would indicate it is a potentially substantial structure”.

He goes on to say: “If the Indico-1 well performs anything like that it would point to the fact the CPO-5 block could be very prospective and perhaps larger than we’d hoped for”

This farm out agreement appears to have been part of a well thought out strategy on the part of Amerisur. The share price has reacted positively over the past week, and this could prove to be a turning point for the company in that respect. Although the oil price has had a sizeable pullback over the past six weeks, sentiment is likely to return at some point, particularly with the right noises emitting from OPEC ahead of its meeting in December.

“Occidental have huge technical resources and the fact they did a large amount of due diligence before they entered into this transaction I think should give investors comfort that Occidental see a lot of value in these blocks, as do we. Unfortunately, the market isn’t giving any value to the blocks. Our 2P reserves really underpin our share price in the Platanillo block, and no one’s ascribing any value to these other assets that we acquired in the downturn.”

With an exciting, and now accelerated drilling programme ahead, Amerisur shareholders could be well placed to ride the wave when positive sentiment returns to the sector.

Disclosure: The author owns shares in the company mentioned above.