London’s junior markets remain flooded by companies looking to find the next significant oil or gas resource. But how do they find that oil and get it out of the ground, and, crucially, how did it get there in the first place? Here, we go back-to-basics with a refresher lesson on where petroleum comes from and how it is turned into a commercial commodity.

How are oil and gas formed?

Petroleum, Latin for ‘rock oil’, is the collective name for oil and natural gas. These are both fossil fuels, which means they consist of hundreds of different hydrocarbon molecules. They exist either in a liquid form (crude oil) or as a vapour (natural gas).

The formation of both types of petroleum dates back to hundreds of millions of years ago. The remains of prehistoric plants and animals settled into the sea and mixed with sand, silt, and rocks. Over time, layer-upon-layer of rock and sediment piled up in rivers, along coastlines and on the sea bottom. This prevented the plant and animal remains from getting air, meaning they could not rot away. As the layers built up, the pressure and temperature on the lower layers increased. This turned the mud, sand, and silt into source rock while turning the trapped organic matter into petroleum.

In simplified terms, whether the process formed oil or natural gas depends on the heat present. The more heat, the lighter the oil. This culminates in the formation of natural gas in areas where there were vast amounts of heat, and the organisms were mainly plants.

Where do the oil and gas go next?

In the beginning, the petroleum existed inside its source rock formation. However, over millions of years, it tended to move gradually towards the Earth’s surface through tiny, connected spaces known as pores.

How far the petroleum makes it in this stage is dependent on the permeability of the rock it encounters. Indeed, some ‘lucky’ hydrocarbons will make it all the way to the Earth’s surface, where they will seep out. The vast majority will get trapped by non-porous ‘tight’ rock or another barrier.

As oil and/or gas builds up at these barriers over time, the area becomes known as a ‘trap’ or a ‘reservoir’. Despite the misleading terminology, these are not underground lakes of oil and gas. They are vast quantities of porous and non-porous rocks holding oil and gas in their pore space. The process is not too dissimilar to the way a sponge soaks up water. These reservoirs and traps sit hundreds or thousands of feet beneath the surface both onshore and offshore. 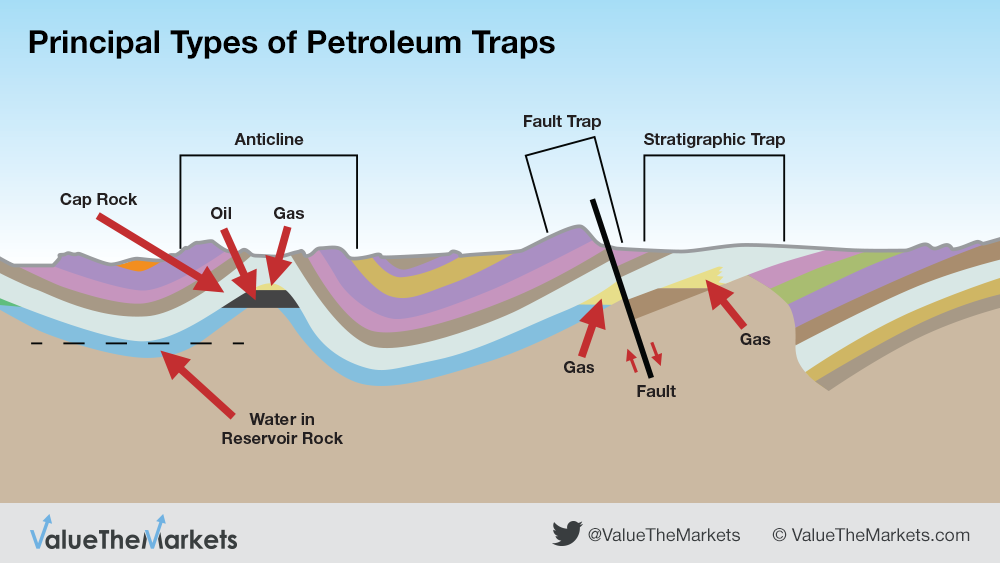 The image above shows examples of the two main types of petroleum traps – structural (anticline and fault) and stratigraphic.

An anticline trap is created by the upfolding of rocks into an arch shape. Oil gradually moves to the highest point in this arch’s dome before coming to a rest. Meanwhile, a fault trap is formed by the movement of permeable and impermeable rock along a fault line. The trap is formed when the oil or gas in a porous section of rock is sealed off by a displaced nonporous layer.

Finally, unlike the other two types of traps, a stratigraphic trap does not result from a changing geologic structure. Instead, it is formed by variations in porosity and permeability within the reservoir rock itself. For example, a porous area of rock containing oil and gas may be surrounded by non-porous rock, locking it in place.

How do exploration companies find these traps?

As can be seen below, traps are found at extreme depths, making them difficult to identify at the earth’s surface. Up until the early 1900s, discovery was mostly a matter of luck, with prospectors looking for visible seeps in the ground. When these opportunities dried up, firms looked for rock outcrops and other surface signs of hydrocarbon presence. As you might imagine, this was a hit-and-miss process.

Over the years, technology allowed geologists to make a map of the underground rocks. This allowed them to pinpoint where they thought oil and gas was most likely present. These developments led to the discovery of many of the ‘easy-to-find’, large oil traps. Most of these have now either run out or have been in production for decades.

Oil and gas firms have had to develop new and more effective exploration techniques to identify harder-to-reach traps. The most notable of these has been ‘seismic surveying’, which comes in both 2D and 3D forms. Like Sonar, seismic bounces sound waves off rock formations deep below the surface of the Earth. This provides a subsurface picture that highlights the potential locations of trapped oil and gas. 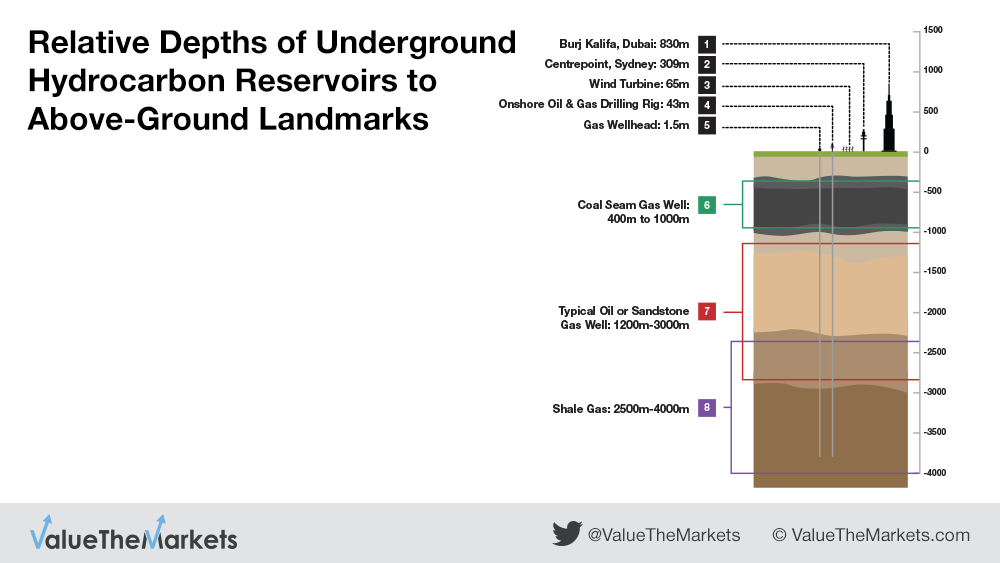 Seismic technology has increased the odds of identifying smaller, harder-to-find reservoirs massively. It has also been instrumental in the hydrocarbon industry’s ability to meet a growing demand for non-renewable resources. However, it is likely that even more complex exploration methods will be needed moving forward. These may allow us to identify reservoirs that we cannot currently even dream of finding.

How do we get it out of the ground?

For many years, the most widely used technique for getting petroleum out of the ground has been the vertical well. This process is simple.

First-of-all, a motor turns a drill bit with special ‘teeth’ that can crush or break up rock to make a hole in the ground. Then, a liquid called drilling mud is pumped down the well. This carries small bits of rock or cuttings to surface, equalises pressure, and prevents water from flowing into the well. The drill bit will then continue to drill until it has reached the required depth.

Often, wells will not encounter hydrocarbons. These are called ‘dry holes’ or ‘dusters’. Likewise, some will encounter negligible quantities of hydrocarbons that are not commercial for extraction. This is always met with understandable frustration from oil companies because wells cost millions to drill.

If a successful amount of hydrocarbons do flow to the surface, then a firm will place a casing of concrete will into the newly drilled hole. This makes it stronger. Holes are then drilled in the casing to let in the oil. After removing the drill rig, the operator will place a pump on the wellhead. Then, this connects to an electric motor that forces the pump up and down to create suction that draws up the oil. The fluids recovered from a well are usually a mixture of oil, gas, and water. These must separate after coming to the surface. A well will remain in production until its accessed reservoir is exhausted. During this period, it will be subjected to ongoing maintenance checks.

The diagram below shows how three wells drilled on one anticline can end in different outcomes. As can be seen, this is largely down to depth. Indeed, two wells have encountered either oil or gas by extending to two appropriate distances. One well, however, has extended too far and penetrated an underground water reservoir. This well will not produce any hydrocarbons if pumped. 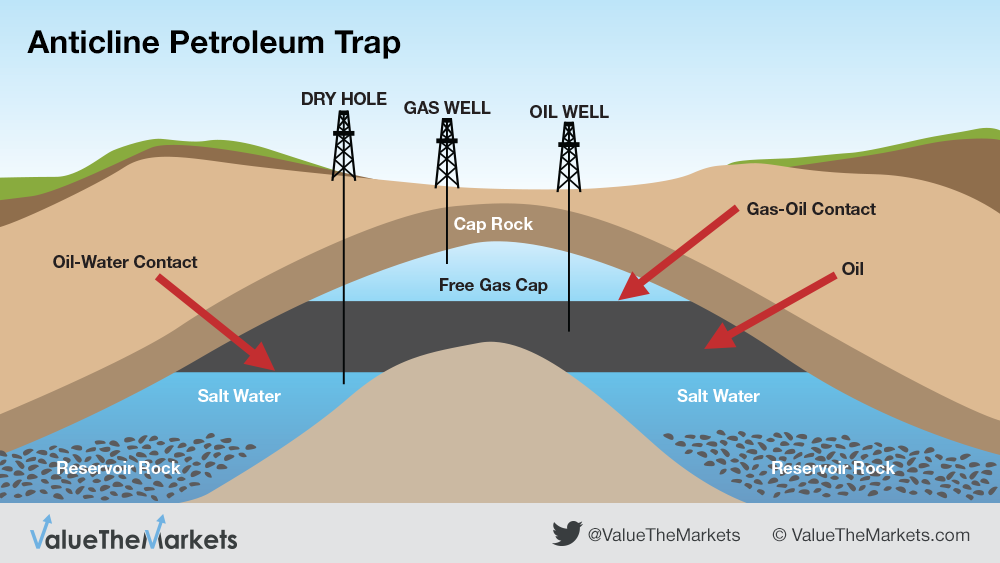 The recoverable hydrocarbons in a reservoir depend on rock properties, technology and technique. Obviously, rock properties cannot change. However, the methods for identifying pools have improved, and drilling methods have advanced. This has made it easier and cheaper to access oil in a previously uneconomic well.

Perhaps the best example of this progress is horizontal drilling. This involves drilling vertically then turning 90 degrees and drilling horizontally. By ‘sucking up’ oil from a much greater area, horizontal areas require the drilling of far fewer wells. They can also get into inaccessible areas in the spacing between vertical wells. What’s more, they enable operators to drill several miles away from the reservoir they have identified. This grants them access to hydrocarbons in sensitive above-ground areas.

Companies often combine horizontal drilling with a technique called hydraulic fracturing, or ‘fracking’. This involves blasting impermeable rock with a mixture of water and sand. The mixture expands and holds open existing cracks to allow the flow of newly-exposed hydrocarbons.

The use of advanced techniques like horizontal drilling is surging in major hubs of hydrocarbon production around the world. For example, in Texas’s Permian Basin, the technique is driving record levels of shale production and helping the US to take market share away from traditionally dominant oil and gas producing nations like Saudi Arabia.

As this piece shows, the evolution of technology is one of the most important factors when investing in oil and gas companies. This is because any technological advantage can help to give a business a competitive advantage.

As an investor, it is essential that you understand where and how a company is operating before you invest. This research could be what guides you away from a dud firm that collapses after putting all of its resources into a duster and towards one using the most up-to-date technology in an active producing region to generate serious returns.