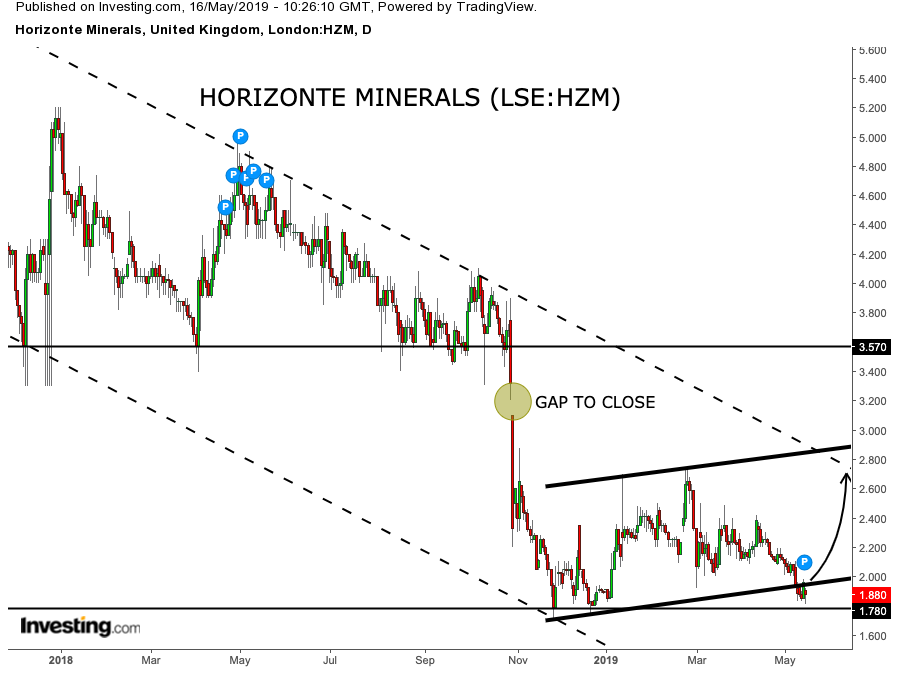 Horizonte Minerals (LSE:HZM) was down in early trading on Thursday, touching 1.8p after releasing its quarterly results for Q1 2019. The update is in line with expectations so there appears to be little justification for the early sell-off. The firm, which is developing the Araguaia ferronickel mine in Brazil, stated it had £5.288m in cash at the end of March.

From a chart perspective, the share price has taken quite a battering over the past few months, falling from peaks of 2.7p this year to its current 1.88p.  Much of the price suffering was caused by City Financial being forced to dump their remaining 8.19pc holding as the Investment Company went into administration.

Support for Horizonte can be found around 1.7-1.8p, with another successful test under its belt this morning. The share price action has dipped below a previously implied upward channel, and moving back into the channel would be a good sign of a potential ongoing recovery – 1.95p is currently required to do this. In the event the stock rediscovers its mojo, a good first target to aim for could be 2.7p where a diagonal line of resistance formed from previous highs sits – this also coincides with the previous high in February. Beyond that, 3p is currently the top of the upward price channel I mentioned before. It’s also worth noting the gap down from October has still not been closed. More often than not gaps in the price action tend to get revisted and ‘filled’. Don’t ask me why this happens, it’s a strange quirk! However, if the stock breaks the diagonal resistance at 2.7p, I would expect the share price to go on and take a run at the key resistance zone around 3.6p.