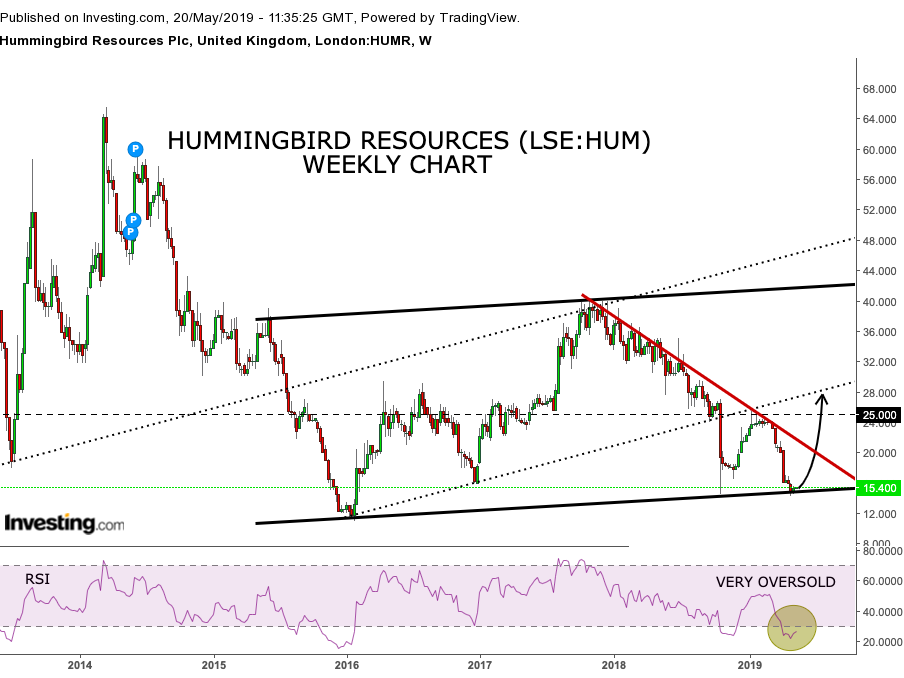 The share price of Hummingbird Resources (LSE:HUM) has taken a considerable hammering for much of this year after the company’s production was hit by operational woes in 2018. In fact, the stock has been declining since it touched highs of around 40p in 2017.

Remedial works are ongoing at the firm’s Yanfolila Gold Mine in Mali but the market still chooses to punish – for now. Surely, it’s only a matter of time before production levels recover and positive sentiment starts to return, with today’s price of 15.4p offering decent upside potential in the short to medium term.

In addition, the stock could also serve as an excellent play on any bullish moves in the gold price. Gold had a nice run up to $1340 in February and, at least for now, it seems the August lows of $1160 were bottom-in.  Although gold may dip a little further below its current $1275 in the short-term, I suspect a re-test of the $1360 zone – that proved strong resistance for a number of months in 2018 – will be on the cards later this year. Central Banks continue to be buying up the precious metal and at some point, we could see a run in gold if and when it’s next called upon as a safe-haven.

There is, of course, the risk of a further drop in the Hummingbird share price in the near-term should current support fail. The 14.6p dip in October last year was retested and upheld, but the bounce hasn’t been nearly as strong – if this doesn’t hold, then 11-12p is the next solid support level, and that’s a good 15-20pc lower than the current price. In the event that does happen it’s unlikely the stock will remain down there for very long. Arguably the worst is likely behind Hummingbird from a production level standpoint, but it’ll be a few months before we see confirmed improvements in the numbers.

In addition to remedial work, the firm is making further improvements to the mine which should also ensure the second half of 2019 is much more positive for Hummingbird. Last month the company reported its second ball mill construction at the Yanfolila mine remains on budget and is scheduled for completion in Q3 2019.

Alongside existing operations, the company now has one eye on the 4.2Moz Dugbe Gold Project in Liberia. The government has just signed to a 25-year Mineral Development Agreement (MDA) for the project. Hummingbird has been granted an initial three-year exploration period with the ability to extend the MDA into other areas with geological continuity.

Once the stock finds its feet again, resistance areas to watch for are 20p, which coincides with breaking through the diagonal (red) line.  Beyond that, 25-28p is a key zone, with the share price recovering stalling here last time. Finally, a re-entry into the stock’s previous upward channel (dotted) would signal a potential charge toward 2017 highs of 40p.