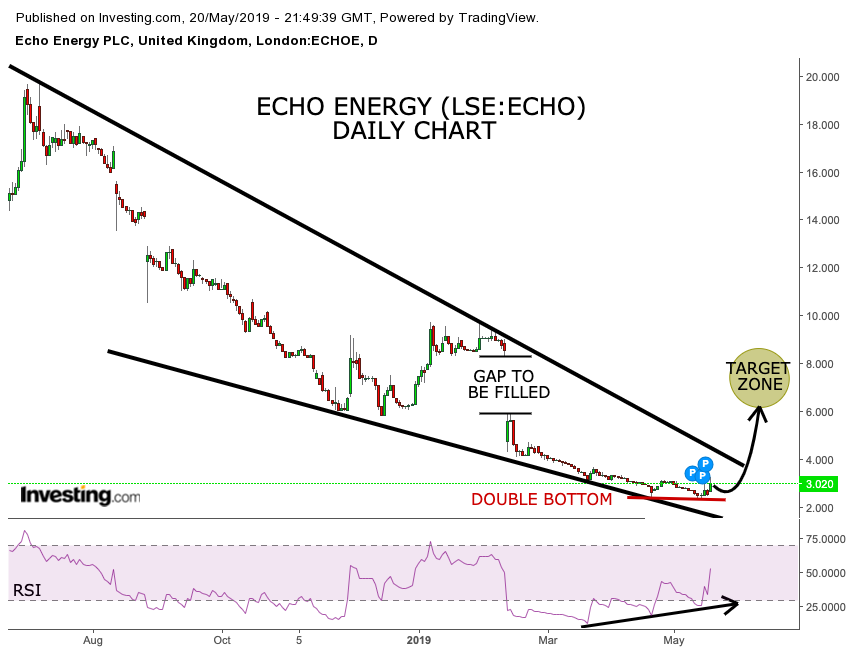 I highlighted Echo Energy (LSE:ECHO) as a potential buy last month at 2.85p. Since then the share price has retested the bottom of the wedge pattern at 2.4p, then subsequently retested that support level.  Following a market-pleasing announcement by the firm on Monday – which saw the share price rise over 25pc to 3.2p – it appears we can now call a ‘Double Bottom’ on the daily share price chart.

It has not been a pleasant year for holders of Echo, with the stock in near-continuous decline since February when Echo revealed the EMS-1001 well to be non-commercial. That caused an immediate circa 50pc drop in the share price and a subsequent drift thereafter, all the way down to 2.4p!

One of the main factors concerning investors was the potential need for cash to continue planned operational activities. Although the company reported cash of $15.6m as of December 2018, this wouldn’t be sufficient to meet obligatory expenditure – particularly, following the poor results with the drill bit.

But those flames of concern were doused on Monday when Echo revealed it has restructured its portfolio. Moving forward, Echo will reduce its interest in the Tapi Aike license to 19pc. This reduces its share of costs to 19pc and does away with the need to carry its Argentine partner CGC. Additionally, CGC will release $2.06m of Echo’s cash previously earmarked for Fracción C, Fracción D, and Laguna Los Capones (CDL) which Echo will direct towards the Tapi Aike drilling campaign costs.

Echo has also decided not to continue with phase two of work at CDL, freeing it from the commitment to shoot seismic which was to cost Echo around $11m. As a result of offloading these obligations, Echo says it can now accelerate the exploration program at Tapi Aike, and confirmed it plans to drill the first well in Q4 this year.

With the share price back over 3p, the next hurdle will be a breakout of the Falling Wedge pattern, currently requiring a close above 4.5p. Beyond there, the gap down in February provides a decent first target at around 8p.

Earlier this month Echo revealed maiden revenues of $8.84m from net production net to of 865 barrels of oil equivalent per day (boe/d) in 2018.

Therefore, at today’s 3.2p, the current Market Cap of £15.3m appears reasonably well supported by cash and existing production. As drilling approaches and investors dip their toes back in the water, I wouldn’t be surprised to see a breakout attempt from that Falling Wedge pattern come the end of summer.