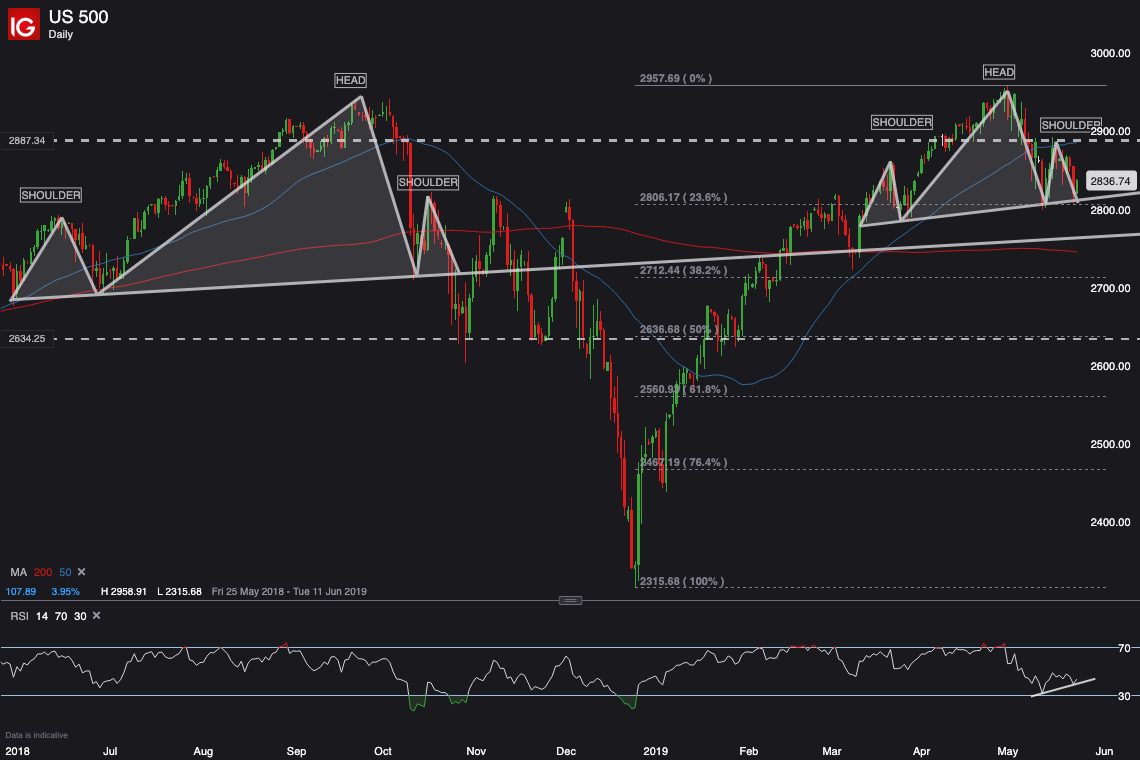 Global markets took a tumble yesterday with the S&P 500 dipping 1.2pc, and the Dow Jones losing 1.1pc. In addition to the Dow potentially having triple topped, a worrying signal has formed on the S&P 500 – the dreaded ‘Head and Shoulders’ pattern.

The index managed to hit a new all-time high in May, but not by much of a margin – just 20 points. This high formed the peak of the head in the pattern which is clearly flanked by two shoulders, with the neckline currently intersecting at 2810.  This is also the 23.6pc Fibonacci retracement and the low of yesterday’s trading – failure here will likely see a strong move downward.

At the time of writing, the price action has just recovered to the 2835 level which was previous support.  Regaining this level won’t be enough to disengage the potential threat of the Head and Shoulders pattern though. The index now needs to clear 2887 before longs can feel comfortable, invalidating the pattern and regaining the 50 Day Moving Average (DMA).

Support below consists of another key zone bulls want to stay above, the 200 DMA which sits around 2750.  Below that is key support formed from previous price action and its bang on the 38.2pc Fib retracement line. This would very much correlate with the initial move we saw in Q4 2018 when markets corrected – that too was a Head and Shoulders set up. The S&P 500 went on to test the limits of support, teetering on the 20pc from highs level before making a very strong and steady recovery during 2019.

In the Q4 2018 correction there was a consolidation period between the top of the right shoulder of the pattern and the initial lows.  These lows around 2635 form the next support zone should the 38.2pc Fib retracement give way, and coincide with the 50pc Fib retracement level. The Relative Strength Index (RSI) is moving in a positive direction for now, but also needs to show some progress above recent levels for any significant move upward.  It’s by no means oversold, so there is plenty of room for it to go much lower. If the 50pc Fib Retracement level around 2634 doesn’t hold, then a retest of December lows would likely be on the cards.