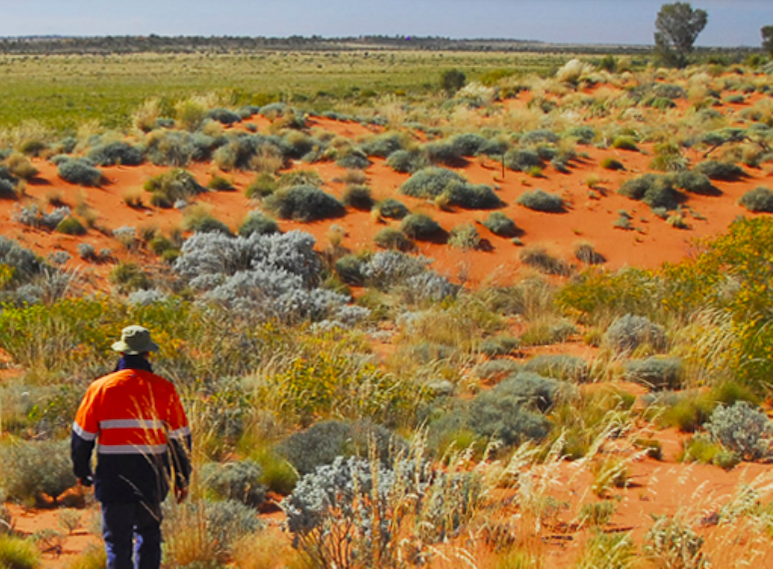 Since hitting 2.3p in March after securing a game-changing farm-in agreement with world-leading gold miner Newcrest for its Havieron asset in Western Australia, shares in Greatland Gold (LSE:GGP) have slipped to 1.7p. Over this period, Newcrest has begun the initial work at Havieron and Greatland has made considerable progress across the remainder of its Paterson project. With major developments on the horizon, MiningMaven spoke to Greatland’s CEO Gervaise Heddle and CTO Callum Baxter about how their plans in Paterson could trigger a considerable re-rate in the firm’s share price.

Greatland, which currently has a £55m market cap, is an AIM-listed natural resource exploration and development business operating primarily in the gold, copper, nickel, and cobalt markets. The company identifies and advances projects that could house large mineralised systems and holds on to them for as long as possible to maximise its range of options for monetisation.

Greatland applies the most up-to-date exploration techniques possible in underexplored areas when looking for projects. Heddle says this allows the outfit to evaluate a site’s exploration potential in the lowest-cost and fastest way possible.

‘As an explorer, we recognise that combining leading edge exploration techniques with a strict capital allocation process is critical,’ he tells us. ‘We are continuously trying to make the next significant discovery, but we also actively bring in projects and ideas. Exploration is a creative process, and you have always got to think about how you approach assets and how you interpret the data you receive. By using an array of modern exploration techniques in a systematic manner, we have been able to uncover prospects previously missed by other miners.’

As it stands, Greatland owns six projects in Australia, a low-risk mining jurisdiction where its management team boasts decades of experience. The most advanced of these is its Paterson project, located in the Paterson province of Western Australia. The company owns three licences in the region spanning 385km2 of ground thought to be prospective for intrusion-related gold-copper systems.

The Paterson region hosts several long-standing, world-class gold and copper deposits, with notable examples including Newcrest’s Telfer mine and Metals X’s Nifty copper sulphide mine. The district has enjoyed something of a renaissance over recent months following a new wave of exploration licence applications and high levels of prospecting from key regional players like Rio Tinto.

Despite Paterson sitting on the massive Proterozoic Orogen formations that hosts the globally-significant Tropicana and Nova deposits in Australia, the region remains highly under-explored. Baxter believes this is because the region’s geology requires a particular set of exploration skills that Greatland has been able to master.

‘Rio’s discovery at Winu and Greatland’s success at Havieron have opened everyone’s eyes up to the Paterson region because it looks like there should be more deposits out there,’ he tells us. ‘However, most of the area’s mineralisation does not pop out at surface as it’s undercover at depths anywhere from 5m to 400m below the surface. Alongside us, we believe there are only a handful of companies that understand the geophysical processes to be able to explore this mineralisation in the region. We are in a strong strategic position.’

Greatland’s most advanced prospect in Paterson is Havieron, which is found 45km east of Telfer and 500km east of rail and port infrastructure at Port Hedland. The asset is a large geophysical target consisting of a coincident magnetic and gravity anomaly covering an area of around 1,000m by 1,000m.

Before its acquisition by Greatland, Havieron had been subject to minimal exploration despite encouraging early signs of prospectivity. Indeed, throughout the late nineties, six holes drilled by Newcrest intersected significant alternation including several high-grade zones with peak gold grades of 15.45g/t and peak copper grades of 2.5pc.

According to 3D models created by Greatland, Havieron offers the potential for mineralisation extending from 400m to more than 1,200m below surface -readily accessible using modern drilling equipment. In April last year, Greatland broke new ground when it followed up these models with its first drill campaign at the asset. This saw it complete four vertical core holes for a total of 2,400m of drilling. According to the firm, the work, which returned a 121m intercept at 2.93g/t gold and 0.23pc copper.

A subsequent, second drilling programme in September last year enhanced this potential even further by establishing new peak grades of 211.3g/t gold, 12.38pc copper, and 4,104ppm cobalt at the asset. This work also included a world-class combined intersection of 275m at 4.77g/t gold and 0.61pc copper.

Havieron’s excellent early drilling results captured the attention of Newcrest, a world-leading gold miner with operations spanning Australia, Papua New Guinea, and Indonesia. In March this year, Greatland announced that the major player had acquired the right to earn in up to a 70pc interest in the 12 blocks covering the Havieron target.

To secure this prominent position, Newcrest must spend up to US$65m and complete a series of exploration and development milestones in a four-stage farm-in over six years. The terms of each of these stages are outlined in the image below. Regardless of whether it decides to proceed with Havieron’s development, Newcrest must spend an initial US$5m on the asset within 12 months of the farm-in commencing.

Elsewhere, the farm-in sees Newcrest become manager of Havieron and grants it first right of refusal over the remainder of Greatland’s Paterson project licences. Heddle expects Havieron to become a cornerstone asset for Greatland if Newcrest’s efforts are successful.

Newcrest and Greatland have agreed in principle that all ore from the asset will be toll processed at Telfer. By leveraging Newcrest’s existing infrastructure at Telfer, Greatland believes they will reduce upfront capital costs, time to production, and time to first cash flows at Havieron. In turn, this is expected to give the project a significantly higher net present value than if the firms had to build a separate processing plant and infrastructure.

Newcrest got straight to work at Havieron completing a native title heritage survey and construction of a local field camp. Critically, it also revealed plans for a 10,000m drilling programme to define the extent of mineralisation along strike and at depth at Havieron, testing the system to a depth of 1,000m below surface. Newcrest’s drilling campaign has now commenced with two drill rigs active.

Moving away from Havieron, Greatland’s second considerable opportunity within its Paterson project is at Black Hills. The asset – purchased by the company in late 2017 – sits adjacent to Havieron’s north-western border and contains four distinct zones of mineralisation called Saddle Reefs, Eastern, Rogers, and Northern Granites. As with Havieron, the asset is regarded as having high potential or hosting gold deposits similar in style to Telfer.

Greatland completed its first exploration campaign at Black Hills in June last year. The work was an immediate success, with prospectors encountering many gold nuggets and pieces in bedrock within days of arriving on-site. Likewise, rock chip samples from the site contained gold grades of up to 81.7g/t and established an 800m strike length of surface gold mineralisation at Saddle Reefs. These results suggested that Black Hills could be prospective for near-surface, low-cost and low-risk exploration. They also went on to inform a 3DIP survey that outlined a large, buried chargeability anomaly at Saddle Reefs over 1,000m of strike.

This year has seen Greatland deliver further progress at Black Hills, notably completing a high-powered, deep-sending IP survey. This work, which concluded last month, extended the strike length of Saddle Reef’s anomaly by 400m. Greatland is now comparing historical IP datasets with its own results to select new drill targets and preparing a 6,000m drilling plan to test the areas covered by its target anomaly.

Greatland’s final Paterson project licence is Paterson Range East, which lies c.25km north of Havieron and covers 224sq kms of rocks prospective for Havieron-style gold-copper mineralisation. Greatland revealed last month that it was planning to conduct a low-level airborne magnetic survey over the entire licence. The work is expected to begin in early June and aims to increase the resolution of magnetic targets on the licence.

Baxter tells us that Greatland identified these targets as part of an internal review of historical regional geophysical and geochemical data over the western Paterson region following its success at Havieron. All-in-all, this work identified a total of approximately 20 Havieron-style targets that have yet to be tested on Greatland’s Paterson Range East licence.

The results of Greatland’s airborne survey will be used alongside other geophysical and geochemical data to prioritise targets to follow up with detailed modelling and drill testing.

Alongside its Paterson project, it is worth noting that Greatland owns several additional projects with significant potential. These will be covered in more detail in a later piece, but include the Firetower and Warrentinna projects in Tasmania, where numerous encouraging signs of gold prospectivity are yet to be explored fully. Meanwhile, in Western Australia, the firm also owns a vast greenstone belt called the Ernest Giles project, an asset that hosts two styles of potential gold mineralisation called Panorama, and a final prospect called Bromus.

Elsewhere, Greatland also intends to capitalise on general weakness in the junior resources sector by acquiring further projects. Heddle, a former fund manager, says he views Greatland’s assets like an investment portfolio, with the addition of new assets and the replacement of others proving pivotal when maximising returns for investors. His ambition is for this approach to lead to another major discovery that will see Greatland become a mid-tier miner when combined with its all-encompassing management style.

‘We are already getting out there and strengthening every aspect of the business,’ he says. ‘With these processes in place, I hope to grow Greatland’s business significantly from its current level. I think there is a realistic path to do that, although risk is attached. The exploration game is tough, but if we can apply the knowledge gained from our recent success and stick to a disciplined capital allocation approach, then we can maximise our chances to repeat this success.’

Heddle’s plans are ambitious. However, they are by no means inconceivable. Within Paterson alone, Greatland boasts a substantial initial financial commitment from a global resources leader that could lead to a game-changing mine alongside additional projects and unexplored targets to boot. When this is combined the firm’s strong management team, wider portfolio prospects, and its cash in the bank (£4m as at 31 December 2018) its future potential seems bright.  With Greatland’s shares falling to 1.7p since hitting 2.3p when the Newcrest deal was announced, a favorable Havieron development decision and steady exploration progress elsewhere could well prompt a re-rate.