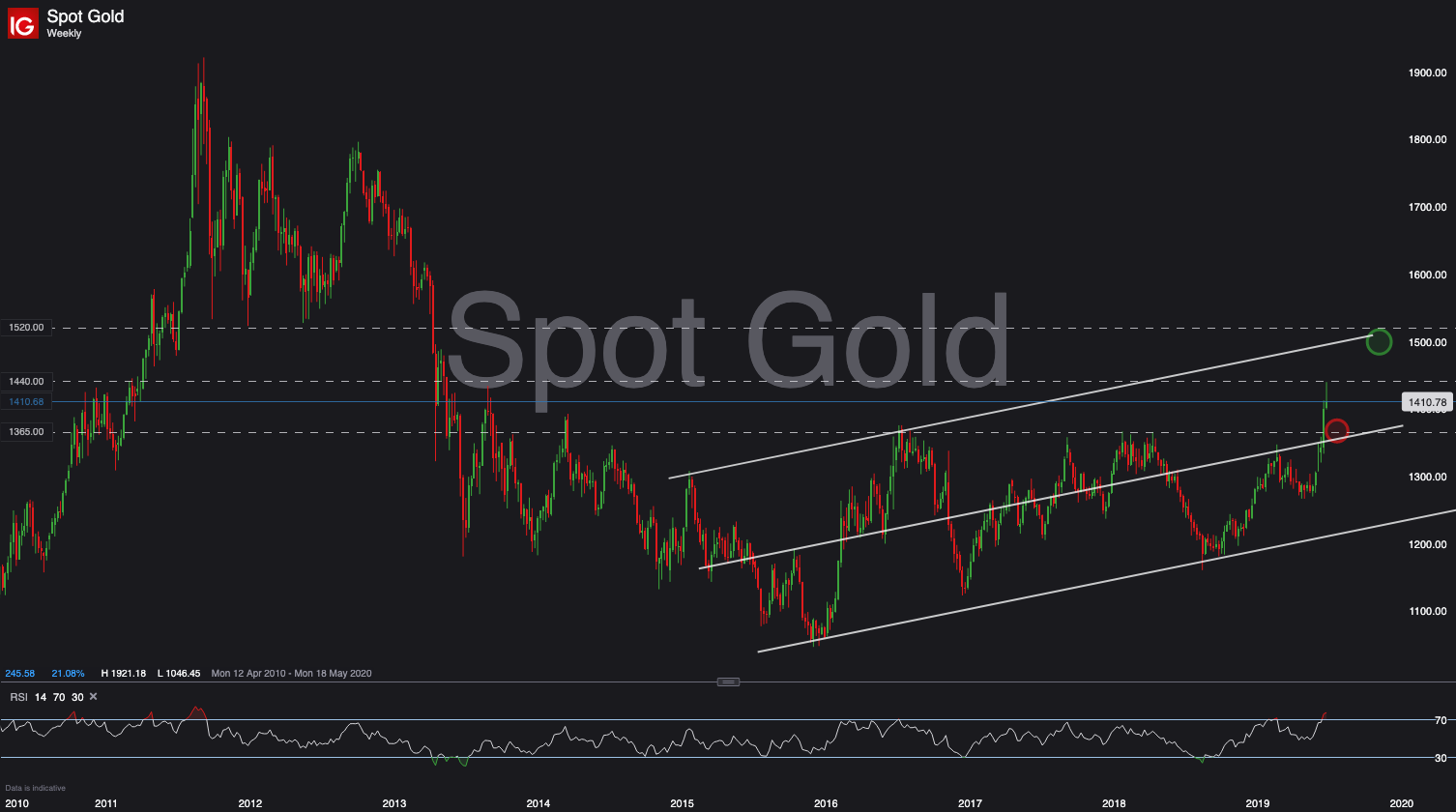 Gold has had a tearing run over the past few weeks, finally breaking out above the $1,365 area which has been firm resistance since 2016. The spot price topped out at $1,440 on Tuesday before a sharp retrace pulled it back to retest the $1400 zone. So far, it’s held up above this psychological level. However, a strong rejection at $1,425 left a long wick in its wake and may suggest further retracement is a strong possibility; in the short-term at least. That said, at the time of writing the price is recovering some of the ground lost from today’s highs.

There is much to be said in support of a bullish case for gold longer-term. Central banks have continued their relentless stockpiling of the metal since the 2007/2008 financial crisis and we are surely standing on fragile ground after a barmy decade-long bull market. Gold is, of course, one of the traditional safe havens for investors in a time of crisis. Usually, the world runs to the dollar for safety first, but that seems less certain than ever in the current geopolitical climate; with some countries clearly trying to escape its clutches, or at least reduce exposure. Anyway, assuming it’s still a favourable place to store value when markets tank, gold will likely have its day at some point in the next few years when global economies finally unravel

But before you jump all-in consider the positions of the key players on the futures markets.

This graphic from tradingster.com sums up the current Commitment of Traders (CoT).

The producers and banks (swap) are extremely short while fund/money managers and other investors are looking optimistically long. This kind of positioning is often a recipe for disaster for one side – and it’s not usually the banks taking the hit!

Back to the charts…the Relative Strength Index (RSI) on the weekly chart is very overbought, at levels not seen since 2011. I have added a channel I think could potentially be in play, based on the bottoms hit in 2015 and 2018. the middle line carves up the positive and negative scenarios well – what remains to be seen is whether the top line will come in to play.  The middle line also currently cuts through the same key $1,365 zone implied by horizontal resistance and may offer further support in the event we see a retrace back to that previous breakout zone (red circle). Whether there’s a retrace or a continued move higher a break past $1,440 hits my top line and an area of horizontal resistance at $1,500 (green circle). If this zone is resistance then we have a potential 4-year bear flag in the making, on the flip side, a break above would be extremely bullish. Of course, if longs are forced to unravel in a big way, gold could see all of its recent gains lost and that then opens up the possibility of retests of previous key support levels – $1,260, $1,200, $1,050, $850.  Anything can happen!