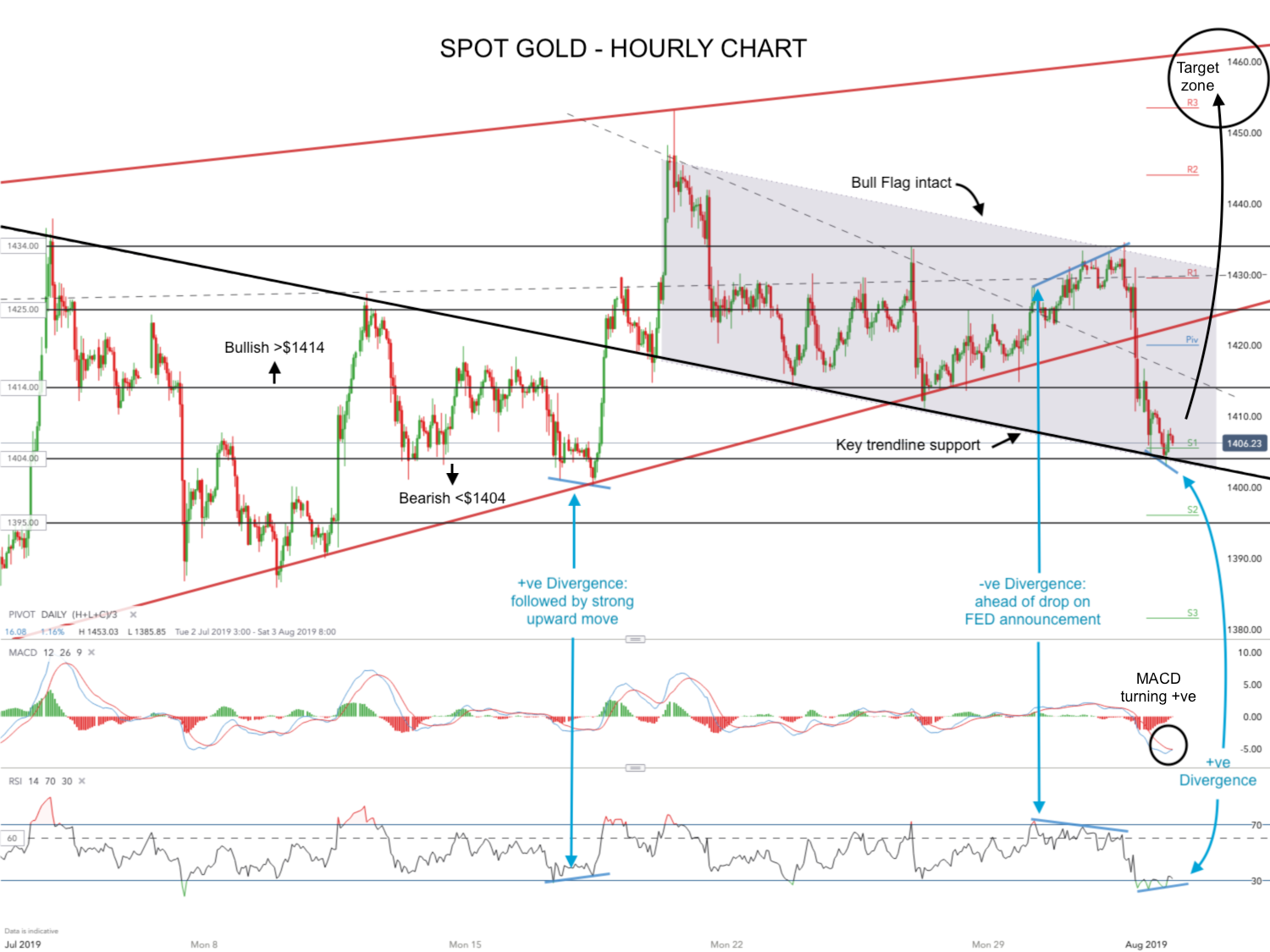 Gold took a tumble yesterday in sync with wider equities markets following the interest rate announcement by the Federal Reserve. Sentiment towards gold was rather bullish ahead of the 25 point rate cut which was thought to be largely priced in. However, comments by Fed Chair Jerome Powell suggesting this cut may be a one-off resulted in a market sell-off as the dollar gained strength.  Gold, followed suit finally breaking down through a trend line the precious metal has largely respected throughout July.

But is all lost for the bull case in the short term? I think not.

Looking at the 1-hour chart, another key trend line (thick black) has so far remained intact.  This line currently requires price action remains above $1400. Likewise, there’s key horizontal support between $1400 and $1404. Even more positively, there’s a Bull Flag (purple shading) that could signify further highs are on their way sooner than you think. If anything, price action is currently in a no-mans land working out its next move.  Below $1404 and the action looks bearish, and a breakout above $1414 gives bulls something to cheer.

Another encouraging sign is Positive Divergence between lower highs and a rising Relative Strength Index (RSI). This is marked in blue on the chart and I have highlighted the previous occasion there was a clear positive divergence between price and RSI two weeks ago. Price action subsequently saw gold sky-rocket into the $1450s. It’s also worth noting negative divergence occurred in the lead up to yesterday’s FED announcement – It seems the writing was on the wall for an imminent pullback regardless of economic chatter.

Finally, the MACD is also rolling over into a more positive direction which suggests some kind of recovery on the hourly chart.

To summarise, if we see a recovery $1414 is a key level to break above. $1420-$1425 will also likely offer sizeable resistance. That then leaves $1435 which was hit yesterday just before everything fell apart. With $1430 signaling a positive exit from the bull flag, the next run may well find $1435 of little concern. Previous highs of $1445 are then in sight, with trendlines suggesting a final target of around $1460 for this potential leg.