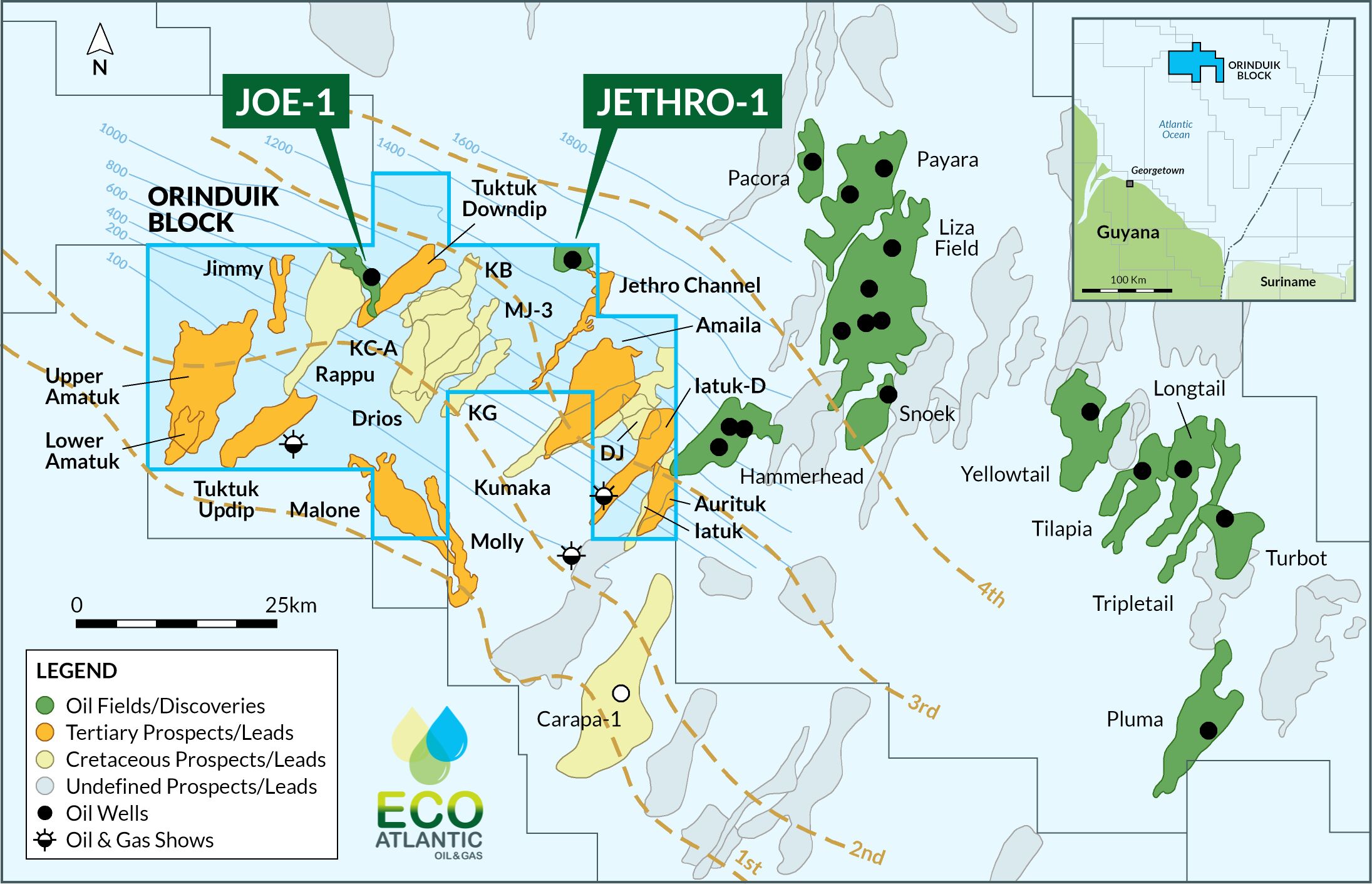 Eco Atlantic Oil & Gas (LSE:ECO) sat at 134.5p on Thursday after announcing the preparation of a major 2020 drilling programme for its 15pc-held Orinduik Block now that recent work has de-risked the area significantly. This year has seen the business, alongside JV partners Tullow Oil (LSE:TLW) and Total E&P, make two discoveries on the 1,800km2 offshore block in Guyana called Jethro-Lobe and Joe-1.

Jethro-Lobe, which was announced in August following the drilling of the Jethro-1 exploration well, encountered an initial 180.5ft of net high-quality oil pay located in Lower Tertiary sandstone reservoirs. This supported recoverable oil resources and confirmed the continuance of a petroleum system onto Orinduik, updip of prolific discoveries at the nearby, ExxonMobil-operated Stabroek Block.

Shortly afterwards, in September, the JV partners announced that another discovery had been made by a second exploration well called Joe-1. The well encountered 52ft of continuous thick sandstone of the Upper Tertiary age, opening up a new play and further proving up the presence of recoverable oil resources at Orinduik. Meanwhile, thinner sands above and below the principal discovery indicated the possibility for incremental pay.

In Thursday’s update, Eco said that evaluation of Jethro-Lobe to date has confirmed that the sands intersected were as anticipated in a competent person’s report (CPR) for Orinduik updated in March this year. What’s more, interpretation of the discovery is ongoing owing to the potential for more resource than previously anticipated. As such, the partners are now evaluating the requirements for an appraisal well on the discovery.

Meanwhile, Eco confirmed that the cost of drilling Joe-1 came in at under $21m – less than half the price of drilling Jethro-1. The business, which now funds 15pc of Orinduik’s development following a farm-out with Total in November 2018, said this ‘positively [affects] development economics in [the] play’.

Critically, the company said the JV’s initial analysis of both discoveries advances and de-risks many additional opportunities across Orinduik’s Lower and Upper Tertiary horizons. This effect will be furthered by the results of the Carapa well that Repsol is currently drilling in shallow water on its adjacent Kanuku Block, just south of Orinduik. Meanwhile, ExxonMobil has announced thirteen discoveries at Stabroek, which are now estimated to contain more than 6 billion boe of recoverable resources.

TThe Orinduik partners’ most recent CPR estimated that the block could contain best-case gross prospective resources of 3,981MMboe across 15 leads. On Thursday, Eco said that the partners plan to commission another update of this figure to reflect the ongoing interpretation of data from both the Jethro and Joe discoveries. Alongside this, the firms are reviewing a number of existing leads for a 2020 drilling programme, with additional high-graded candidates also now under consideration.

Tullow, Orinduik’s operator, is preparing a budget for this work covering long lead items such as wellheads and casing. The partners are also reviewing a post-discovery drilling strategy and supplemental budget. This will include additional exploration research concerning future well target selection and costs associated with activities for further wells under consideration for drilling in 2020.

Eco, which said is fully funded for next year’s campaign, plans to provide a further update on the JV partners’ budget approval and agreed drilling locations when possible. As the firm’s co-founder and chief operating officer Colin Kinley put it:

‘With further processing and interpretation of 3D seismic data, now correlated with our two well discoveries, the location of further wells to be drilled in 2020 will be defined within the next few months. In addition to geological and geophysical interpretation work, Eco and its JV Partners have now begun operational budget planning to secure commercially attractive proposals for the timely provision of materials and services required to allow for our drilling program in 2020.”

Meanwhile, fellow co-founder and chief executive officer Gil Holzman added: ‘After great success in our 2019 drilling campaign, with two significant oil discoveries, the JV Partners on the Orinduik Block have many additional targets to consider in the near term. We are pleased to support the further work in 2019 and look forward to approving the 2020 drilling program and budget once finalized. We are sufficiently capitalized for drilling further wells in the 2020 program. With ample de-risked prospects and targets on the highly prospective Orinduik Block, Eco is well positioned to continue to generate material shareholder value.’

Elsewhere, Holzman said Eco is continuing to advance exploration at its four Namibian offshore blocks, where it sees ‘increased inbound interest and drilling activity’ locally. The company’s Namibian licences cover c.25,000km2 with over 2.3bboe of prospective P50 resources in the Walvis and Lüderitz Basins.  The four areas – called Cooper, Guy, Sharon and Tamar – are being developed alongside partners Azinam and NAMCOR.