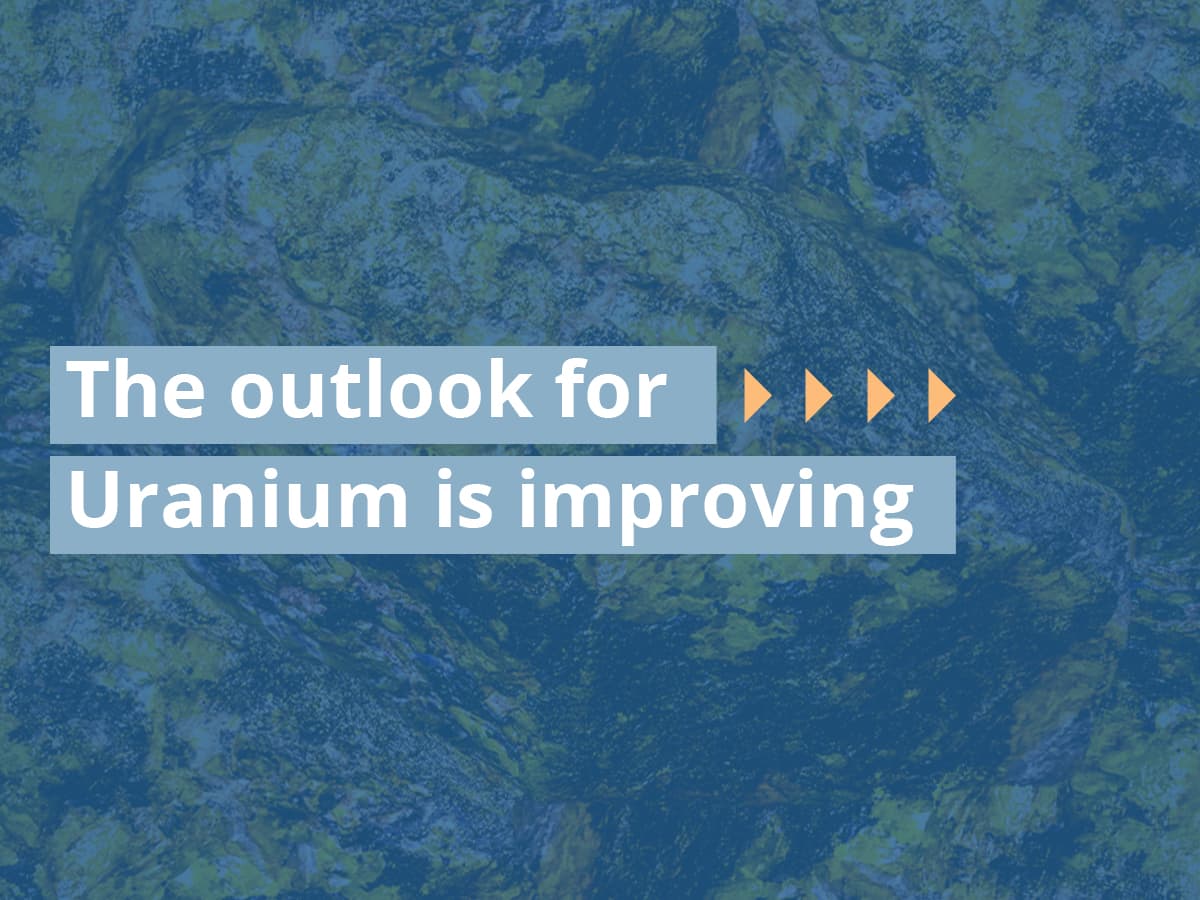 The spot price of uranium (U3O8) has risen by 36% since the start of 2020, to a recent high of US$34/lb. Rick Rule, President and CEO Sprott US Holdings Inc has been pushing uranium since 2018 and feels the price will rise further. This is partly related to shorter-term concerns over COVID-19 and resulting supply cutbacks, but also more favourable supply and demand fundamentals and despite a number of areas of ongoing uncertainty related to US uranium policy. There is now an industry consensus that the demand picture has improved significantly in recent years while more supply constraint is taking place by producers.

This has resulted in a growing gap between annual utility requirements and primary production, which at present is being filled by drawing down on inventories and other secondary sources of supply. However, recent data from the US Energy Information Administration shows that utility inventories are starting to decline and are approaching levels that could put security of supply at risk.

Electricity generated from the world’s nuclear reactors increased for the seventh consecutive year in 2019 although has fallen in 2020 due to reductions in demand during the pandemic. Nevertheless, there are currently 55 reactors under construction, and the World Nuclear Association’s Nuclear Fuel Report shows a 26% increase in uranium demand over the next ten years. Some of the growth in reactor numbers is tempered by early reactor retirements, plans for reduced reliance on nuclear, or phase-out policies in other regions, and a trend for increased efficiencies.

This could change though as sentiment towards nuclear power is also improving. One recent significant announcement was made by the EU, agreeing that nuclear energy must be included as part of the solution required to meet the EU’s goal of becoming carbon neutral by 2050. The Canadian federal government also recently highlighted its support for nuclear energy when it stated that affordable, safe nuclear power is the key to reaching Canada’s climate goals. Germany is also reconsidering its full-scale nuclear phase-out by the end of 2022.

On the supply side, an important positive factor is that the suppliers of uranium ore are now better managing capacity. The world’s largest and lowest cost uranium producer, Kazatomprom (the national operator of Kazakhstan), has curtailed production by 20% until 2021. Another major uranium producer, Cameco of Canada, has closed its flagship McArthur River operation until market conditions improve, Rio Tinto is expected to exit the market following the sale of its Rössing operation in Namibia and the slow wind down of its Ranger operation in Australia, and in Niger the Cominak mine will cease operation in March 2021 due to depletion of ore.

Furthermore, as a result of the current pandemic, in March 2020 Cameco announced the temporary suspension of production at its Cigar Lake mine in northern Saskatchewan, which is the world’s largest operating uranium mine. Similar production restrictions were announced by Kazatomprom in respect of various operating uranium mines in Kazakhstan. These are significant unexpected supply-side events for the nuclear fuel industry.

What is the outlook uranium prices? Leading uranium producer Cameco suggests that as annual supply declines, demand for uranium from producers and financial players increases, utilities’ uncovered requirements grow, and with trade policy potentially restricting access to some markets, the amount of uranium available in the spot market will not be adequate to satisfy the growing backlog of long-term demand. As a result, it expects there will be increased competition to secure uranium under long-term contracts on terms that will ensure the availability of reliable primary supply to meet growing demand (in other words higher prices will result).

How Can You Invest In Uranium?

There are a couple of Exchange Traded Funds:

Trading the Futures Market entails investors trading standardised futures contracts that obligate the buyer to purchase (or the seller to sell) an asset in this case uranium at a predetermined future date and price. There are not many choices but here are a couple;

There are a few big cap mining stocks that amongst other commodities, mine uranium namely:

Away from these large cap names there are also a number of mid sized exploration companies:

They invest in physical holdings of uranium with the primary objective of achieving appreciation in the value of its uranium holdings.

In Wyoming, UEC controls the Reno Creek project, which is the largest permitted, pre-construction ISR uranium project in the U.S.

Also based in Canada’s Athabasca Basin where they hold 21 exploration licenses. They raised $6mln over the summer and are currently in the middle of a drill program.

What is uranium used for?

Uranium (U3O8) is primarily used as a fuel for nuclear power plants for the generation of electricity. Through the process of nuclear fission, the uranium isotope U‑235 can undergo a nuclear reaction whereby its nucleus is split into smaller particles. Nuclear fission releases significant amounts of energy, creating heat to generate steam to spin a turbine, and is the basis of power generation in the nuclear industry.

The initial step in the process of preparing uranium for use in a nuclear reactor is the mining and upgrading of the ore in a uranium processing facility to produce uranium concentrates containing 80-90% U3O8. Uranium concentrates are priced and sold based on the U3O8 content.

The second step in the nuclear fuel cycle process takes place at licensed uranium conversion facilities where U3O8 is converted to UF6 (or to natural UO2 for Candu type reactors). Above 56 degrees Celsius, UF6 is a gas and is in a suitable form to be enriched to produce fuel for the majority of reactors. Following this UF6 conversion, the uranium is enriched and then fabricated into fuel bundles, at which point it is ready to be loaded into a nuclear reactor.

Note that at the prices which utilities are likely to be paying for current delivery, only one-third of the cost of the fuel loaded into a nuclear reactor is the actual ex-mine (or other) supply. The balance is mostly the cost of enrichment and fuel fabrication, with a small element for uranium conversion.