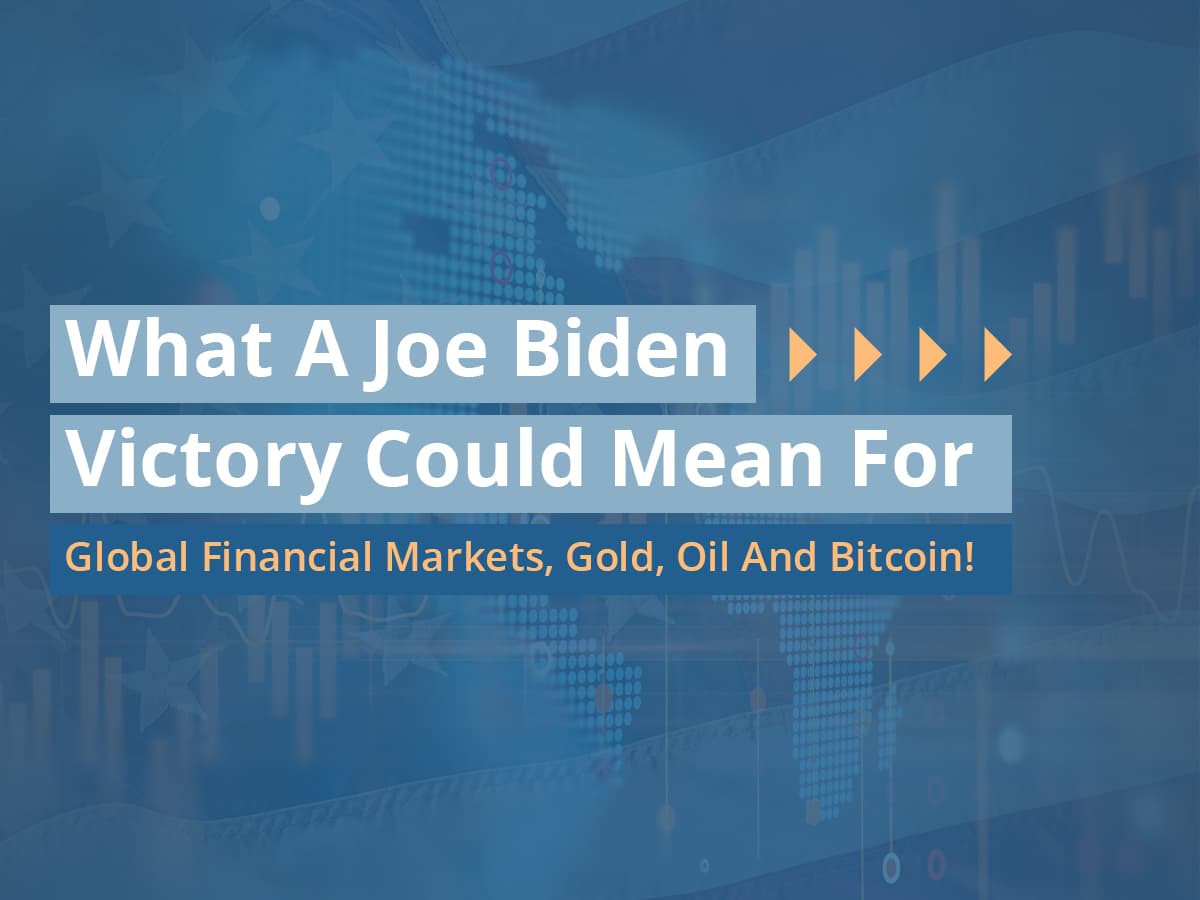 Joe Biden President-Elect is the projected winner of the 2020 presidential election with his running mate Kamala Harris becoming Vice-President Elect. Despite a deeply divided race and the potential of legal battles to come, the world has warmly welcomed the outcome. But what does it mean for the global stock markets going forward? With the pandemic in full flow and a divided nation, certainty is out of reach, but there are plenty of options on the table to keep us speculating.

With President Trump remaining in power for another two months, volatility is likely to continue, particularly with Covid-19 wreaking havoc at the same time. But a few areas to watch for clues as to future market projections include the following:

The Pandemic and the Federal Reserve

Two major issues hang over the financial markets, regardless of who’s running the country. Namely, the pandemic and the federal reserve. While the Fed keeps printing money, borrowing costs will remain low.

As election week came to an end on Friday with still no clear winner in sight, the stock markets rallied. The S&P 500 enjoyed its best week of the year since April, gaining around $2 trillion in value!

Jerome Powell, otherwise known as Jay Powell, is chair of the US Federal Reserve. The man behind the money. The man with the power to print. He has proved himself a friend to Wall Street over the past two years, and that shows no signs of changing.

If nothing else, this year has shown us that technology stocks are the go-to safe-haven when uncertainty abounds in the economy. During 2020 tech stocks have soared to unprecedented, and some worry overvalued, heights. This rally is continuing despite many investors getting nervous as earnings ratios reach astronomical levels.

Cathie Wood of ARK Invest believes tech stocks show resilience because they are the future. The future is here, with the pandemic causing a speed up in research and development of many key areas. Wood has a personal net worth of $250 million and is in position 80 on Forbes’ sixth annual list of America’s Richest Self-Made Women. Her funds have done exceptionally well this year.

This is all very well, but a lot of discontent has set in regarding the control big tech has over corporate America in its sheer size and dominance. But in addition to this, the control social media has over ordinary citizens is borderline scary. Biden has mentioned his dislike of social media’s ability to spread misinformation. This is a big issue to tackle and likely to take many years, but court cases have already begun and legislating this arena may come to the forefront of Biden’s reign.

The Calm Before or After the Storm?

As long as Congress is divided, then it will be difficult for drastic decisions to be agreed upon as it will curtail big tax hikes or spending shifts. This offers some reassurances to the market, because change creates uncertainty resulting in increased volatility. However, it doesn’t necessarily help with calming the divide.

They will vote for the two remaining senate seats in Georgia a fortnight before the Presidential Inauguration in January. Either it will determine a Republican majority senate or a Democrat majority senate, but in either case it will be a narrow majority rule. This means extreme changes in policy are unlikely to be passed through without a fight.

What about the Sloshing Price of Oil?

Since the oil price melt-down in April when it collapsed into negative territory, it’s been on shaky ground. It thankfully recovered quite quickly from that fateful day but has never rebounded to the January highs of $60+ per barrel. Today it’s languishing around $42 for Brent Crude and $40 for West Texas Intermediate (WTI), with projections expecting it to remain there for the foreseeable future.

The price of oil is up in response to the Biden victory, but this could be short-lived. The pandemic is spreading rapidly throughout Europe, the UK and the US. Some countries are making progress at beating it, and the chatter around vaccines appears as if widespread availability could be imminent, but until that’s confirmed global growth is likely to remain suppressed.

“The slow recovery will permanently affect global oil demand levels, shaving at least 2.5 million bpd off our forecasts made before the coronavirus. We have lost at least 2 years of oil demand growth in 2020 and 2021, while before the virus we expected yearly growth of 1 million bpd. The lockdowns will stunt economic recovery in the short-term and in the long-term and the pandemic will also leave behind a legacy of behavioral changes that will also affect oil use,“

This outlook concludes that respite for the oil price may indeed be short-lived. The financial and commodity markets are all banking on the Fed ramping up its quantitative easing program, but it may not be as fast or as high as investors hope. While Rystad does not believe peak oil demand is yet behind us, the loss of demand growth will take a year or two to recover from, and meanwhile the oil price is unlikely to skyrocket.

“Overall, we do not believe Covid-19 has put peak oil demand behind us, but we do acknowledge the pandemic will greatly alter the peak oil demand reckoning moment, both in terms of timing and volumes,”

Biden carries supply risk if he eases IR and VZ sanctions, which could unleash 2+ million bpd of #oil on the market as early as 2021. In a robust recovery scenario, Iran could ramp up current output of 2.5 million bpd to 3.7 million bpd by the end of 2022. #OOTT #Election2020 pic.twitter.com/ucCeAca4Yu

And Where is Gold Placed in All of This?

Gold is another commodity that’s had an exciting year. In contrast to the oil price, it’s seen its value soar to an all-time high in August. Since then it’s been in decline, but many gold bulls see it climbing further still as the pandemic rages on into 2021. Much will depend on government stimulus, debt, and geopolitical tensions.

A split Congress is expected to boost gold in much the same way it should benefit growth stocks as high rates and high inflation are unlikely.

Will Bitcoin Rocket to The Moon?

The price of Bitcoin has shot up in recent months, with it spiking over 40% in the past month alone. Until the social unrest is dealt with and solutions appear in sight, the stability of the US dollar is in question. This is likely to be a boost for bitcoin and its cryptocurrency peers.

Dutch Institutional Investor @PlanB is as bullish as ever, believing bitcoin will reach $100K-$288K before the end of December 2021. It seems a supply shortage, geopolitical uncertainty and civil unrest all bolster his vision.

People ask if I still believe in my model. To be clear: I have no doubt whatsoever that #bitcoin S2FX is correct and #bitcoin will tap $100K-288K before Dec2021. In fact I have new data that confirms the supply shortage is real. IMO 2021 will be spectacular. Not financial advice! pic.twitter.com/GNSxLIt7NG

#bitcoin priced in gold. 1BTC = 8 ounces of gold, up 1 ounce in 1 month .. and counting? pic.twitter.com/dQDO3bWNgP

Where Biden stands on Cryptocurrency is less clear. He didn’t refer to it during his campaign drive apart from once when he mentioned he didn’t own any. That was in response to the July 2020 celebrity Twitter hack in which hackers duped followers into buying Bitcoin.

Who takes up the regulatory positions in the new Biden administration could determine whether cryptocurrency gets some freedom to grow, or is thwarted in its tracks. Gary Gensler is a possible addition to be appointed as a financial advisor overseeing Wall Street. He’s shown an open mind to cryptocurrency in the past.

Could Emerging Markets Outperform the US?

America’s trading partners stand to benefit as the incoming government has a less protectionist stance on the US than the Trump administration. This morning Japan is trading at three-year highs.

Some analysts believe emerging markets could potentially outperform US markets. This is because emerging markets have seen massive outflows this year in response to the Covid-19 pandemic, and much of this has found its way back into the US market. Could the tide turn again? If the dollar trades weaker, then this scenario could well play out.

The trade wars that Trump triggered with China, the UK and other International allies may draw more favourable conclusions, but they’re unlikely to be backtracked completely. Biden regrets his past foray into free trade and is keen to keep jobs in America, particularly as the pandemic continues to erode so many of them. Unfortunately, the UK trade deal remains at risk as long as Brexit threatens the Northern Ireland Good Friday agreement.

The 2020 election has again laid bare the deep division and prejudice present in the United States. This is a clear social issue that has damaged the international reputation of the country and needs addressing. It could lead to negative consequences for growth, productivity and progression if the possibility of civil unrest continues. Which in turn would most likely lead to a weaker dollar.

Team Biden is very much on board with the climate change agenda and plans to re-join the Paris agreement and bring down US emissions over the coming decade. This could also encourage foreign nations to follow suit in order to gain favour with the US government and prominence on the world stage.

So, the financial markets are up today in a vote of confidence of things to come. Meanwhile, President Trump refuses to accept the election outcome and court challenges are being filed. Nevertheless, it seems the world already has its answer and a legal challenge is unlikely to be taken seriously by the markets. Bitcoin and Gold still look good. Equities look volatile and Oil is going to take its time recovering.