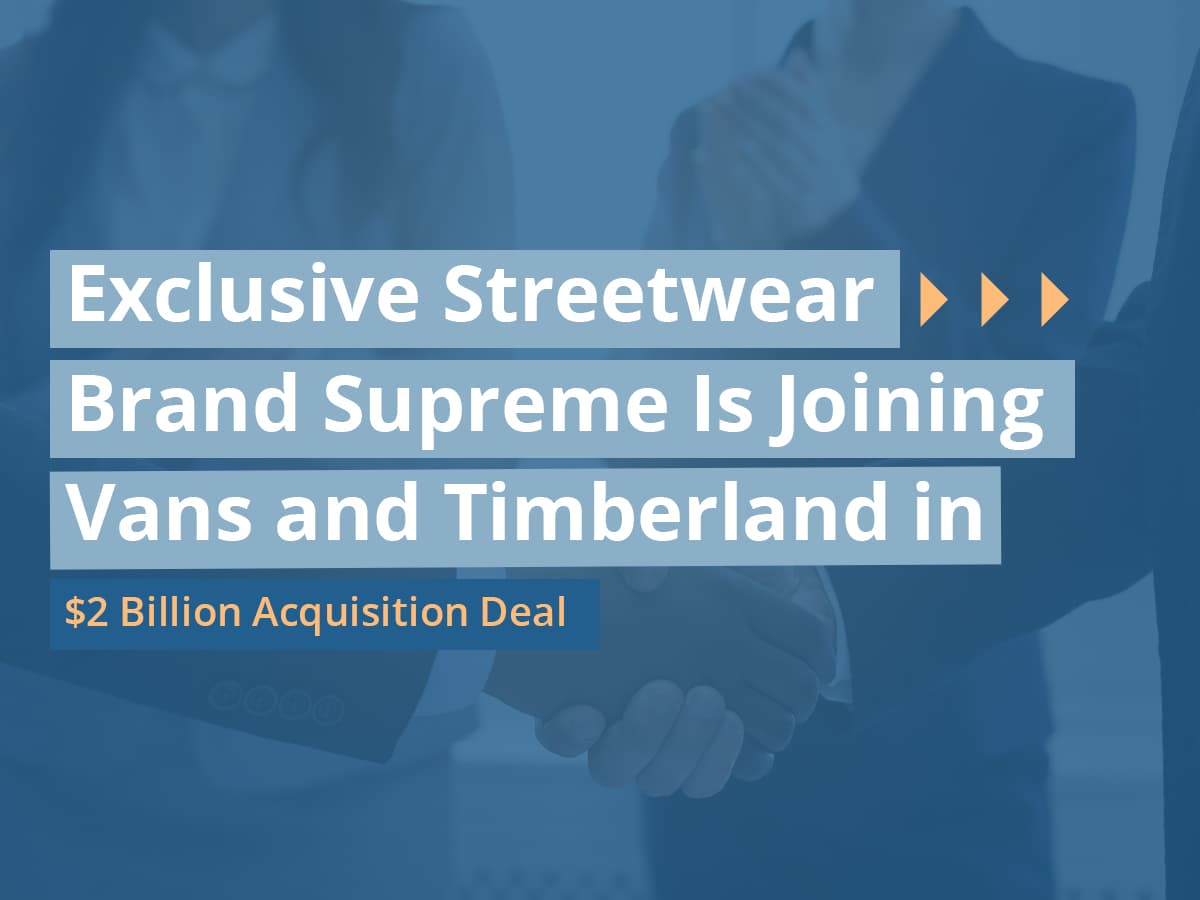 Athleisure and lifestyle brand Supreme is now being acquired by VF Corporation (NYSE: VFC), an American worldwide apparel and footwear company. In a deal reportedly worth $2.1 billion (£1.6 billion), Supreme will now be under the same banner as Vans, The North Face, Dickies and Timberland. As VF’s website puts it: “Our iconic brands are more than just labels. They connect people around the world to the activities and experiences they cherish most.”

Supreme is a brand that focuses on exclusivity. It makes very few instances of a garment, then charges heavily for it. Following this limited-edition path to production, it then ‘drops’ the product at a prearranged time and date, ensuring consumers are scrabbling to be the first to own the sought-after pieces.

Supreme has its subtle red and white logo added to products, instantly inflating their value to the extreme. Although it’s primarily a streetwear brand, its logo can also be found on random products such as a director’s chair for $250 or a snorkel set for $215. In 2019, the brand released a full professional drum kit by Pearl for $3,998. This is after many weird and wonderful product drops including crowbars, bricks, fire extinguishers, shovels and even Oreos.

Demand for Luxury is Rising

This leaves no doubt there is money to be made in high end luxury. Despite the pandemic curtailing economic growth, demand for luxury goods shows no sign of waning.

The VF acquisition comes three years after private equity firm The Carlyle Group bought 50% of the company in a deal that valued it at $1 billion. This surprised many in the fashion industry because it really emphasised the power in this streetwear brand. A company that had risen to create a profile as exclusive as traditional designer brands like Louis Vuitton and Gucci.

Casual clothing is hot, with the at-home vibe resonating with everyone this year. And as Instagram influencers are glamming up even the most mundane of items, casual clothing reigns supreme. But it’s not just the pandemic that’s driving this area of growth. Casual clothing has been key to attracting new customers for a few years now, and if anything, the pandemic has enhanced this. Champion is another streetwear label enjoying its moment in the sun. It’s also been witnessing increasing demand during the pandemic and is on track to be a $2 billion brand by 2022.

It’s a boon for fashion houses because casual clothes are generally much cheaper to produce than intricate designer garments. It’s also been a source of wonder, readily welcomed by top end brands. Supreme and its peers, Noah and Palace, have helped bridge the gap between streetwear and designer wear creating a strong desire for these goods in consumers.

A Stock to Watch

The VF share price has been volatile this year, but overall it has risen 71% since the March market crash. This latest acquisition should be a good fit for its lifestyle brand portfolio. Supreme has a history of collaborating with the brands it’s now sitting alongside with. It joined forces with Vans in 1996, Timberland in 2006 and The North Face in 2007. All these lifestyle brands have dedicated fans and repeat customers, just like Supreme does.

The VF Corp share price is enjoying a gradual rise since the March stock market crash.

Streetwear is a $50 billion market and VF believes Supreme will hit $500 million in revenue for this year, predicting 8-10% growth by 2024.

Although Supreme can pivot to the luxury side of the market, its core fanbase are its skater fans and its focus is ultimately on athleisure and outdoor wear. It will be interesting to see how it fares once the economic uncertainty passes.