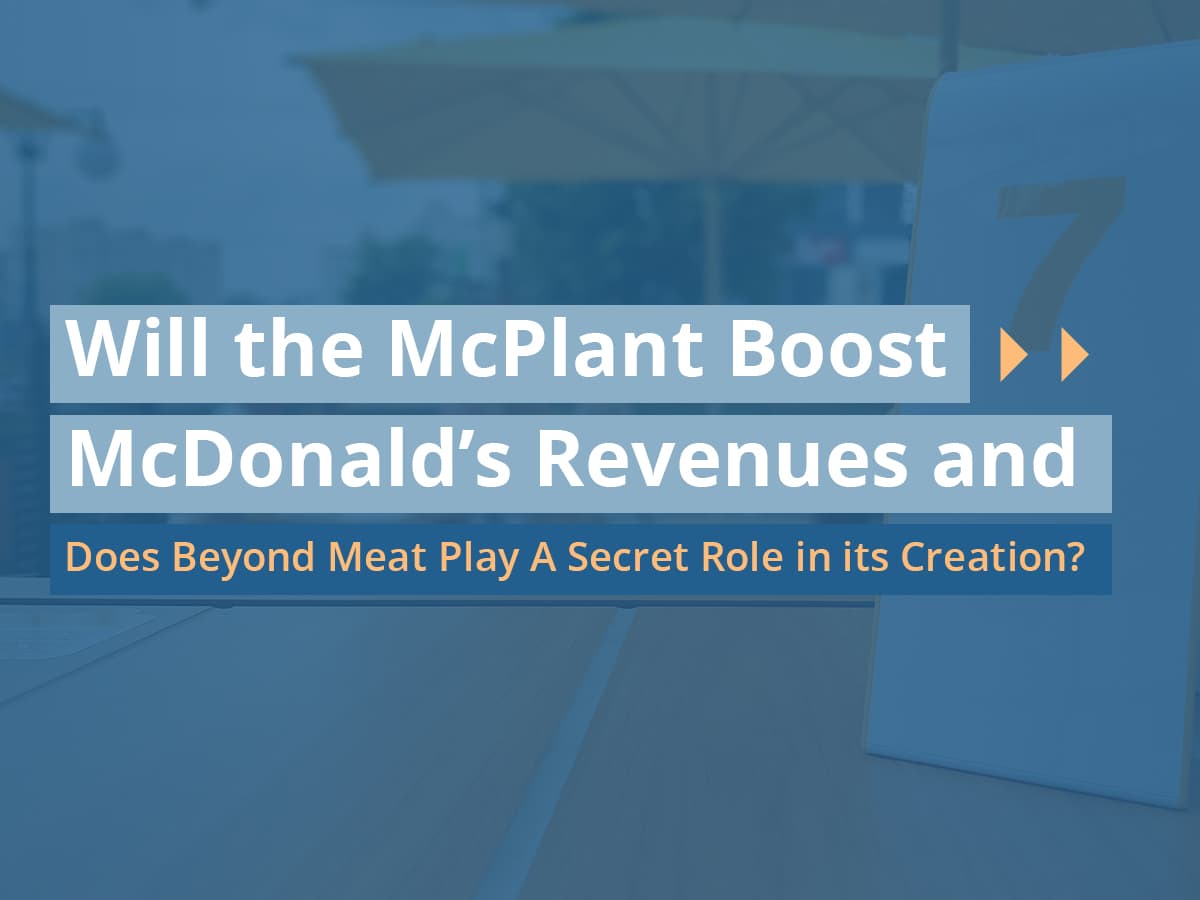 McDonald’s Corp (NYSE: MCD) is bringing out the McPlant burger in 2021. It’s a meat-free burger created with a plant-based filling. McDonald’s claims to have developed the burger in house, but there are also rumours that Beyond Meat Inc (NASDAQ: BYND) helped create it for them.

Many of its competitors have long since brought out plant-based offerings, and McDonald’s has been trialling them in certain regions. In fact, in September 2019 McDonald’s began a 12-week test of a Beyond Meat plant-based burger, rolling it out to 28 select locations in Ontario, Canada. They called it the P.L.T. in reference to Plant, Lettuce, Tomato.

The fact Beyond Meat and McDonald’s collaborated on the P.L.T. but haven’t confirmed a relationship in developing the McPlant, is puzzling. Speculation abounds, and as Beyond Meat claims there still is an association, the situation becomes even cloudier. Could they be working in a white label format? If so, this would not help build their brand but could certainly make a big difference to revenues in the future. However, Beyond Meat clearly stated that they would not be happy with this scenario.

Beyond Meat went public in 2019 and its share price has endured a volatile existence. Its shares fell over 18% this week after a disappointing earnings release. Analysts still feel bullish on its long-term outlook, but the economic uncertainty caused by the raging pandemic means near term fluctuations are to be expected. Whether it’s working on the McPlant remains unclear, but in other news, Beyond Meat is partnering with Pizza Hut (Yum! Brands, Inc. (NYSE: YUM)) to offer plant-based, meat-substitute pizza toppings.

Beyond Meat’s share price plummets after disappointing earnings, but analysts still believe in its long-term prospects.

Slow and Steady Wins The Race

In a collaboration with Impossible Foods, Burger King (Restaurant Brands International Inc (TSE: QSR)) launched a vegetarian option last year with its Impossible Whopper. McDonald’s may be late to the party, but it’s confident it’s bringing a top-tasting treat to the table.

“In fact, we think our culinary team nailed it. There are other plant-based burgers out there, but the McPlant delivers our iconic taste in a sink-your-teeth-in (and wipe-your-mouth) kind of sandwich. It’s made with a juicy, plant-based patty and served on a warm, sesame seed bun with all the classic toppings.”

While some markets will receive the McPlant next year, it’s not yet known exactly when or where it will be launched. It also seems there will be additional vegetarian products in the pipeline.

“In the future, McPlant could extend across a line of plant-based products including burgers, chicken substitutes and breakfast sandwiches.” – Ian Borden, McDonald’s International President

Mainstream veganism and going meat free part time is on the rise, as people weigh up the benefits of a diet containing less meat. The movement is gaining momentum and in the past couple of years there’s been an obvious shift in consumer attitudes to meat and brands responding to meet their needs.

In the UK the supermarket shelves are filling up with meat-free alternatives and plant-based proteins. Tesco PLC (LON: TSCO) launched its Wicked Kitchen range in 2018 and has done a roaring trade ever since. It’s now the first UK retailer to set a sales-based target on plant-based alternatives to meat. Its target is to boost sales of meat alternatives by 300%, by 2025.

This effort is partly based on consumer demand for new, tastier options and to meet sustainability targets. In partnership with the World Wide Fund for Nature (WWF) it hopes to halve the environmental impact of the average UK shopping basket.

Billions of dollars towards research and development is pouring into the sector and there are no signs of the plant-based protein appeal slowing down. With global demand for plant-based protein expected to reach £4.1 billion this year, it’s an area investors should be keeping an eye on.