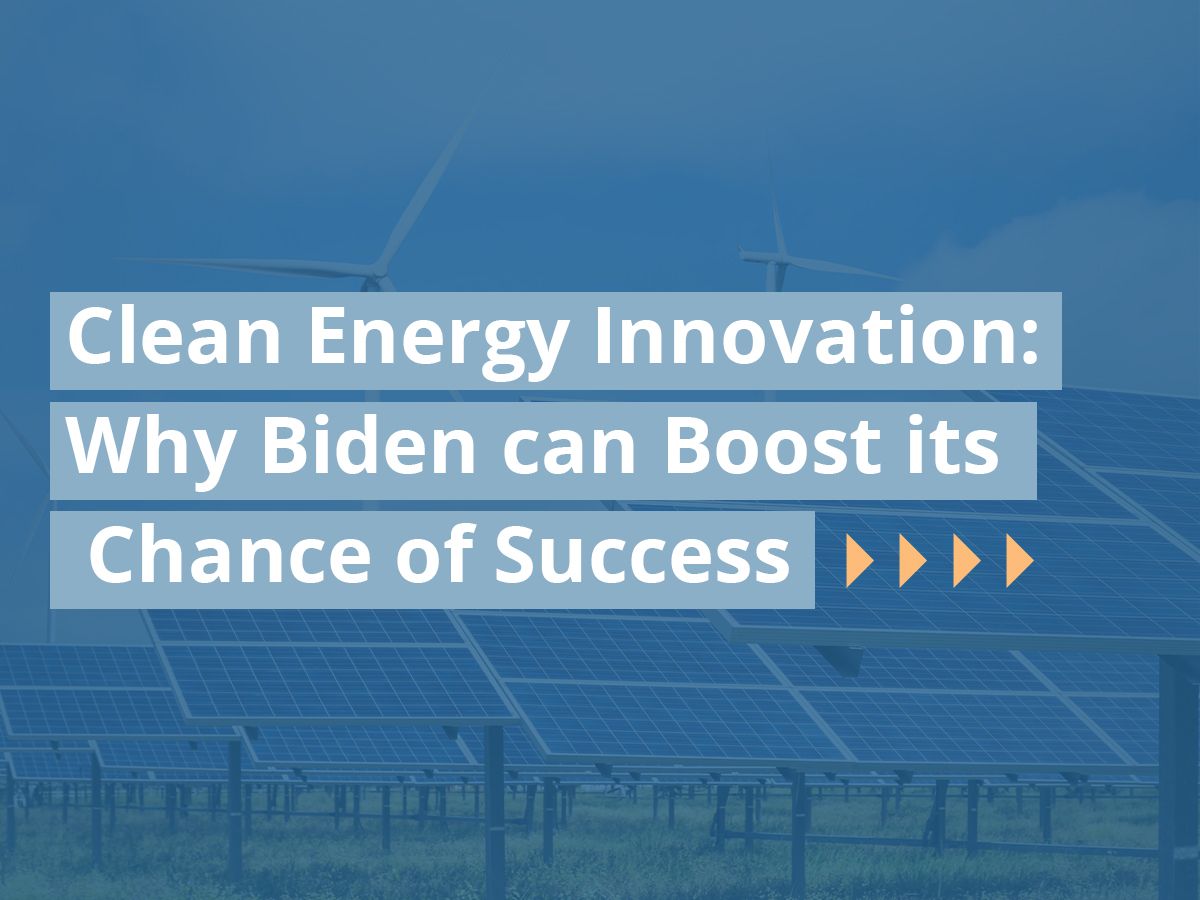 Clean energy has been the talk of the town in recent years, but since 2020 ground to a halt the Covid-19 pandemic is hijacking the headlines. Now, that’s all about to change. With President-elect Joe Biden due to take office next month, it marks a new beginning for advancements in clean energy innovation.

During his campaign rally, Biden talked the talk about promoting clean energy and modernising infrastructure. Now it’s time to see if he’ll walk the walk. He pledged to spend $2 trillion investing in clean energy. That’s a sizable sum and could go a long way to making up for a lack of progress in recent years.

This money would go towards a selection of projects including car charging infrastructure, improved battery technology and clean air travel.

Why the Demand for Clean Energy?

Hurricanes, wildfires, melting ice caps, sea levels rising and extreme weather conditions. These have all been presenting humans with proof of the destruction climate change is capable of. Now there is a generational shift in the need to do something about it. Younger investors are looking for more environmentally friendly ways to put their money to work, and hedge funds are bringing out ESG friendly investment options to accommodate that.

The pandemic brought the planet to a screaming halt earlier in the year, and for a brief moment there was a glimpse at how amazing it would be, if we could just pause long enough to let the planet heal. Of course, that’s not economically possible, so alternative solutions must be found.

Humans are guilty of contributing to the global warming crisis through pollution and greenhouse gas emissions (which include CO2, methane, and nitrous oxide). But, from the driving force of innovation, many clean energy solutions are arising.

Prior to the 2020 grounding, the United Nations forecast that aircraft CO2 emissions would exceed 2.7 billion metric tons by 2050. Covid-19 is likely to have slowed this for now, but it could speed up again once the world resumes its normal pace.

One way that Biden hopes to tackle this is by incentivizing the creation of a variety of new and sustainable fuels for airplanes. He also proposes changes to aircraft technology standards, management and design. All of which will help bring emissions down and in line with targets.

Drone technology has been gaining ground in recent years. While Amazon.com, Inc. (NASDAQ: AMZN) has been talking about delivering packages for years, it looks like this may finally be on the horizon. Prime Air is its drone delivery system, which aims to deliver in under 30 minutes using unmanned aerial vehicles (UAV).

According to the Financial Times, Amazon is teaming up with Austria’s FACC Aerospace (VIE: FACC) and Spain’s Aernnova Aerospace to speed up progress in its long-awaited delivery drone project.

For the declining airline industry, drone operation could be a natural progression and welcome area of revenue in the coming years. Many remote locations have been left isolated from technological advancements, but UAV could dramatically transform that by speeding up delivery times.

Draganfly Inc (CNSX: DFLY |OTCQB: DFLYF |CSE: DFLY | FSE: 3U8) is a Canadian drone company and industry-leading manufacturer in the Unmanned Aerial Vehicle Systems space. It has already inked several deals with the military, bringing in steady revenue and recently signed as exclusive supplier to Varigard. With its powerful technology, it’s in a prime position to deliver Varigard’s Covid-19 killing sanitizer to arenas, concert venues and stadiums. Draganfly is an award-winning drone manufacturer worth watching.

Drone Delivery Canada Corp (TSXV:FLT | OTC:TAKOF) is another operating in this space. It recently tested its Robin XL delivery drone program at a rural location. It aims to begin remote deliveries next year, and its Transport Canada approved testing schedule will help make that happen. The Robin XL can carry up to 11.3kg (25lb), but with its largest drone, the Condor, it has the potential to carry heavy loads up to 180kg (400lbs). Drone delivery throughout the vast expanse of Canada is a much more environmentally friendly way to deliver packages to remote places. In 2019 Drone Delivery Canada signed a contract to partner up with Air Canada, from which it benefits from its massive contact network, leading to many new and significant deals.

Meanwhile, drones are being used in surveys, commercial and private photography, real estate and many other areas of modern industry. Global Energy Metals Corp has utilized drones to conduct a UAV-Magnetometer Survey and deliver digital surface modelling over top priority targets at its sites.

In another example of drone innovation, Biden’s election night victory was celebrated with a ‘drone show’. A safer and environmentally friendly alternative to fireworks displays. The drones deployed 200 GPS navigated light shows in a choreographed display, perfectly synchronized to music. Yet another innovative example of technological advancement in pursuit of a cleaner world.

Biden is on a mission to achieve zero-emission public transit in cities with a population size greater than 100,000 inhabitants. To do this, the Biden administration hopes to work with cities and towns to drastically improve the overall infrastructure for pedestrians and riders of bicycles, e-scooters and micro-mobility vehicles. He also wants to build the world’s “cleanest, fastest and safest” rail system. To achieve this will also require US built buses to achieve zero-emissions targets by 2030.

A UK company about to list in the US on the NASDAQ could well be in a position to help Biden achieve this goal. Arrival is preparing for mass production of its first electric bus within a year, followed by its electric van by early 2022. It hopes to raise $660m (£498m) at IPO, valuing the company at around $5.4 billion.

In a differing business model from Tesla Inc (NASDAQ: TSLA), it plans to roll out microfactories in the locations that need them most. Using a robotic production line, it can then rattle out small or large quantities of vehicles at lower margins and higher profits, while achieving affordable price points for customers.

With Tesla’s astronomical share price advancements throughout 2020, there’s no doubt in people’s minds that the EV market is on a tear. And Biden absolutely wants to cement that by positioning America as the global leader in EV manufacture and distribution. He also hopes to restore the full electric vehicle tax credit to consumers. As this will help reward purchases and improve uptake across the land.

Improvements in battery tech are another area of innovation desperately seeking capital and research to accelerate advancements. Both Tesla and Nio Inc (NYSE: NIO) are forging ahead in this sector, as it has the potential to revolutionize EV distribution and many other disruptive innovations around the world.

Biden’s campaign run called for the federal government to invest in battery and energy storage technology. This is to the tune of $5 billion over a five-year period. It will focus on accelerating research and development in America. Biden wants to do his best to create American jobs and reduce reliance on foreign countries, so this move will also involve developing a domestic supply chain for electric vehicles with batteries built by American workers.

Biden talked of creating 500,000 electronic charging stations. The lack of readily available infrastructure is one barrier preventing consumers from opting for an electric vehicle. This level of investment would go a long way to improving infrastructure for car charging throughout the United States.

The president-elect also said he’d like to offer rebates to buyers looking to exchange older vehicles for fuel-efficient alternatives. When he worked with the Obama administration Biden was involved in a similar scheme, officially called The Car Allowance Rebate System (CARS) but commonly known as ‘cash for clunkers’. This lasted for two months during summer 2009 and cost $3 billion.

Chargepoint makes electric charging stations. Its advancements are constant and futuristic. It even lets you start a charge with your phone or your voice. To date, it’s raised $127 million (€107 million) through several rounds of cash from venture capitalists. It’s due to list on the NYSE imminently, in a reverse merger with SPAC Switchback Energy Acquisition (NYSE:SBE).

According to Crunchbase Savari has so far raised around $20 million. It develops wireless sensor software and hardware sensor technologies connecting cars, traffic signals, pedestrians and bicycles. Thereby helping to advance the creation of smart cities.

All these sectors are worthy of further investment and have been increasingly drawing money from the venture capital space. Green Hydrogen tech is a hotly discussed area enticing investor money. Meanwhile battery tech, in particular, is loved by venture capitalists having attracted over $550 million in the past year. One such VC backed EV battery maker is Romeo Systems, which is due to IPO soon.

The clean energy sector could very well turn out to be the best performer under Joe Biden if he follows through with new policies to stop the worst side effects of climate change in its tracks.

Every industry has a part to play in preventing things from getting worse and helping the planet heal. New markets are rising from the ashes of this carbon heavy industry and there are many lucrative areas for savvy investors to make money.