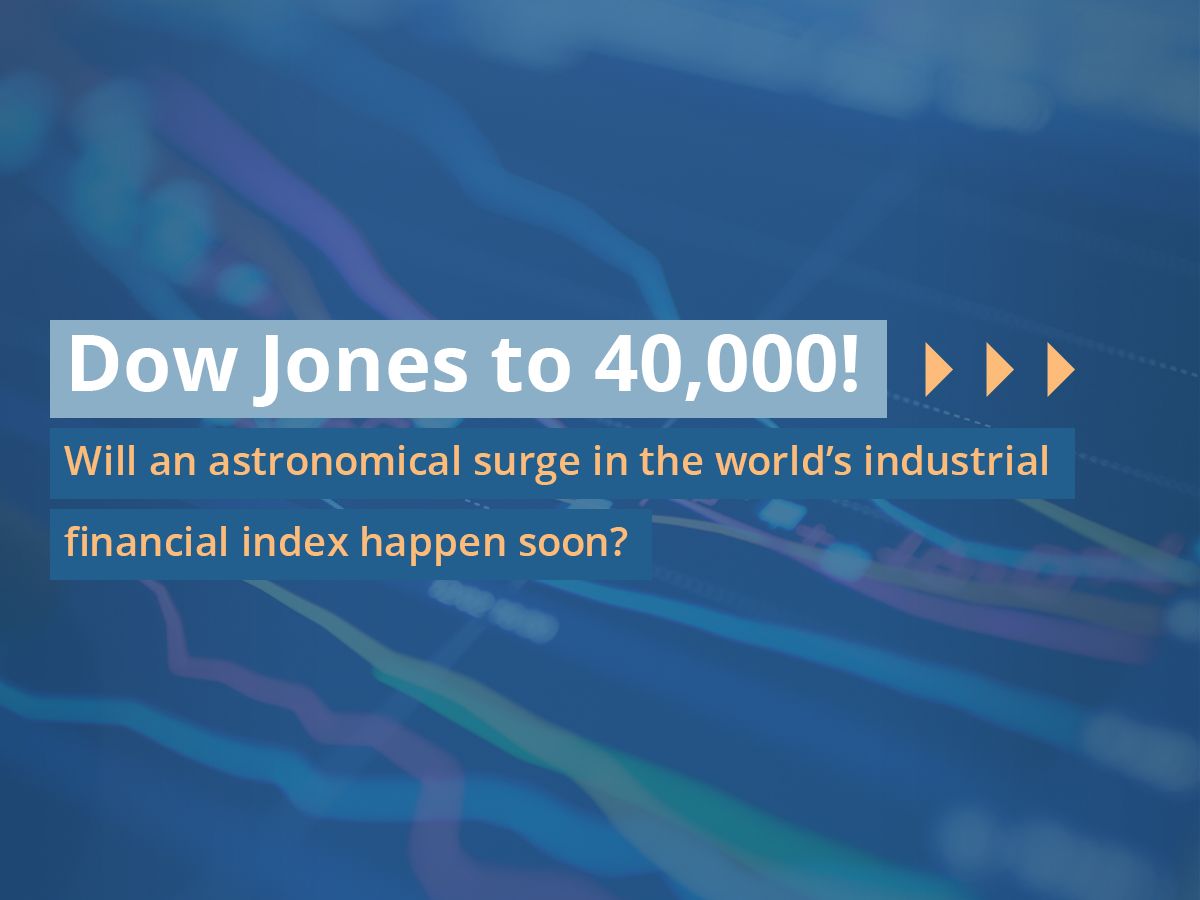 The Dow Jones Industrial Average (INDEXDJX: .DJI) has finally risen over 30,000 points, surprising many amid the debilitating state of the world. But this is not a surprise to everyone. Some contrarian investors have been anticipating a sensational Dow rise for years. Yet why it should happen during a world of pain, seems at odds with the nature of stock market investing.

The Dow Jones is a financial index measuring the performance of 30 of the largest companies listed on US stock exchanges. Keeping this in mind, along with the premise that ‘only the strong survive’ it makes sense that this could happen during a period of extreme volatility.

Throughout the past 35 years the DJIA has achieved average returns approaching 9% annually, exclusive of dividends. If the Dow continues at this rate throughout 2021, it will naturally bring the index to 40,000. This chart illustrates how far the Dow has risen since the nineties.

While it’s clearly endured a volatile 2020, it has bounced back, exceeding prior highs and ploughing through the coveted 30,000 point. But the question is, can it keep ascending to pierce the unattainable 40,000 mark?

Charting the rise of the Dow Jones Industrial Index throughout 2020

The Dow’s collection of blue chips includes high-profile names such as Apple (NASDAQ: AAPL), Microsoft (NASDAQ: MSFT), Visa (NYSE: V), Boeing (NASDAQ: BA) and Chevron (NYSE: CVX). While the oil and airline stocks have been holding it back, tech and pharma have soared.

One reason the Dow is poised to rise, is because that’s how it’s designed. The S&P Dow Jones Industrial Average contains 30 of the best performing companies in America. These are sometimes removed through acquisitions. But rarely does a poor performing stock get to remain in the DJIA. They can also be booted out of the index for poor performance or a plummeting share price.

The Dow is a closely followed equity index, but a lot of professionals don’t rate it as an accurate representation of the US stock market. The S&P 500 Index is generally preferred because it’s market cap weighted and better depicts the US stock market as a whole. The Dow Jones on the other hand is price weighted. This means it derives its value from the price-per-share of each stock listed in it, divided by a complex number that takes various scenarios into account. This index is organised by its very own Dow Jones index committee.

Therefore, it’s not so much about whether the Dow Jones can surpass 40,000, but when. Although its past performance would suggest the sky’s the limit, there are many factors to be considered.

Price Surge Ahead: The Wisdom of Crowds

David Elias, a professional money manager, wrote a book called Dow 40,000. In it he explains why increasing numbers of people buying stocks could eventually cause the Dow Jones to rise above 40,000 points. His book was written back in 1999, and he predicted the Dow would exceed 40,000 in 2016. It didn’t, but that doesn’t mean to say it won’t.

The advent of Robinhood investing has brought a record influx of new retail investors into the space. And this has brought both heightened volatility and a surge of unrecognisable traits occurring in the markets. Robinhood is a mobile brokerage worth over $8 billion with a customer base of more than 13 million users.

An example of this occurred in May when car-rental firm Hertz filed for Chapter 11 bankruptcy. Within days retail investors were seeing this super-low share price around 50 cents, thought they were getting a major bargain and piled in. They’re opportunistic in nature and largely uneducated on the finer points of investing. This leads millions of them to pile into cheap shares on the off chance they’ll make a quick buck. This resulted in Hertz rallying a ridiculous 900% between May 26 and June 8.

The insane rise of shares like Tesla (NASDAQ: TSLA), Zoom (NASDAQ: ZM) and Square (NASDAQ: SQ) in 2020 has fuelled this desire to get rich quick. It’s also creating an increasingly dangerous environment for inexperienced traders.

Aside from the risks to the investors themselves, the sheer weight of their combined investment is likely to continue to push momentum to heights never before witnessed. In turn this will boost the Dow Jones.

A Skyrocketing DJIA: The Biden Effect

The arrival of president-elect Joe Biden to office early 2021, has sparked a wave of optimism. And many believe it will continue throughout the coming year. As widespread vaccine use appears imminent, hopes for a recovery are high and the indices could rise steeply.

While the election result caused discord in the ranks, the transition of power to president-elect Joe Biden is finally getting going. Biden wants to get the economy back on track while unravelling what he deems to be the wrongdoings of the past four years. He also wants to create jobs for Americans and reduce reliance on foreign nations. All this points to a continued drive for a nation to succeed.

Having a Fed background should put her in the driving seat for future negotiations. The current Federal Reserve chair Jerome Powell wants to continue with low interest rates at least until 2024. He wants to give the country time to recover and heal from the Covid-19 crisis, without adding inflation into the mix. While the Fed doesn’t have full control over interest rates, its influence goes some way to ensuring what happens next.

Low interest rates are traditionally good for investors because markets tend to go up when the Fed is cutting rates and unravel when the Fed is raising them. This should encourage high-growth businesses to borrow funds, helping them get back on track and expand. Again, this bodes well for the rise of the Dow Jones to dizzying new heights. .

Is a Stimulus Package Likely?

While a government fiscal stimulus was promised by President Trump before the election, this has not been forthcoming. It will be nothing short of a disaster for American citizens if one doesn’t come to pass before Biden takes power. Covid-19 cases are rising at an unprecedented pace, and the holiday season arguably requires more money than any other time of the year.

I may be the last person on Wall Street who still believes we will see a fiscal relief package passed this yr.Always the contrarian,but even Congress can’t be so blind & heartless as to ignore the 20 million people unemployed & the millions of small businesses closing their doors

The leading party of the new Senate has not yet been confirmed. This will go to a contest in early January. Nevertheless, a stimulus bill is expected, no matter what the outcome. It should consist of several trillion dollars and will go a long way to resurrecting small businesses and injecting cash into the economy.

Hot on the heels of Biden’s win was the long-awaited news of Covid-19 vaccines with over 90% efficacy. This renews faith that the coronavirus crisis could soon be behind us and the rebuilding of economies can begin. Another plus for a soaring index.

Contrarian investor David Hunter says: “The Real Melt-Up Is Still Ahead of Us”.

I keep hearing pundits talking about the likelihood & need for a big correction before the market moves higher.We already had the correction with the low at the end of Sept & a retest a month later.The market is breaking out & the melt-up beginning.Rally will be steep & stunning.

If it’s Good Enough for Bitcoin!

In a year of unexpected events, the sheer speed of Bitcoin’s recent price rise has surprised even the biggest Bitcoin bull.

Bitcoin’s unique selling point is its limited supply, in this regard it’s even rarer than precious metals like gold. Now that institutional investors are showing an interest in it, confidence in its continued price rise is growing.

Bitcoin responds well to a low-interest environment because it gives hedge funds an alternative place to hedge against inflation. Therefore, if low interest rates keep Bitcoin rising, they could equally keep stock markets rising. Again, boosting the chances of the Dow at 40,000.

Many still believe the stock market to be the best vehicle for building wealth over time. Is it possible that scaremongering is causing investors to miss out on profits they could be enjoying from a market that will continue to boom? No one knows. The pandemic is an unprecedented event that hasn’t occurred in over 100 years. Back then the world’s financial markets were very different, and globalisation had barely begun. Therefore, how we emerge from this is still unknown.

But there are several reasons the Dow Jones Industrial Average could break through the elusive 40,000 mark in 2021. Perhaps it’s not as outrageous a scenario as we might have thought coming into 2020