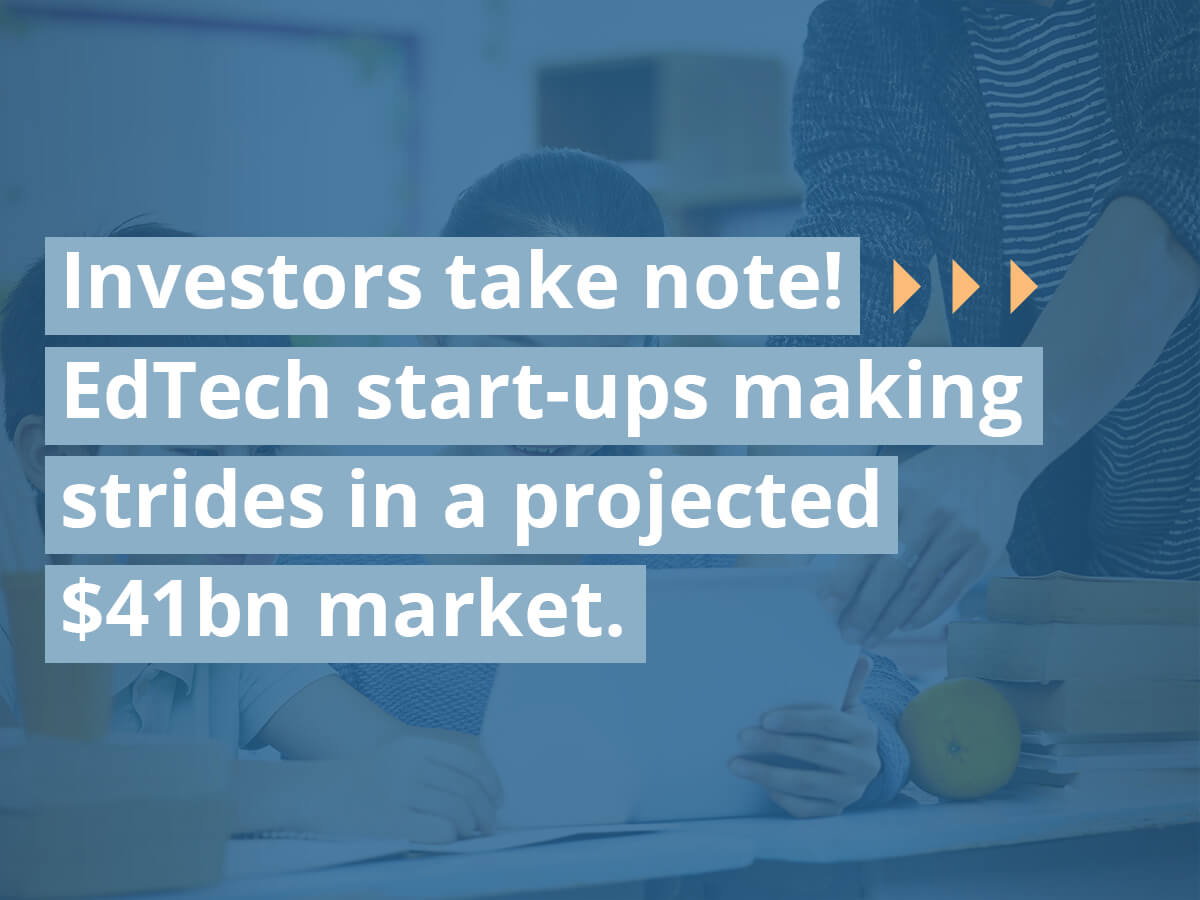 Education technology (EdTech) has been hitting headlines for the past few years. But it’s taken on a life of its own in the past twelve months. None of us could have predicted the speed we would adopt EdTech as the pandemic arrived unannounced and left us all isolated, restricted and education services up in the air.

As the pandemic hit, kindergartens, nurseries, schools, colleges and universities began closing at a moment’s notice. Traditional education systems were slipping away in the blink of an eye. Those early innovators in the EdTech space were suddenly being called upon to pick up the flack and help create a new online normal for those most in need.

As Zoom (NASDAQ:ZM), Peloton (NASDAQ:PTON) and Amazon (NASDAQ:AMZN) solved the social, fitness and delivery challenges posed by lockdown, companies like Google (NASDAQ:GOOG) and Microsoft (NASDAQ:MSFT) were racing to assist the online learning community which had gone from serving a small percentage of humanity to fielding requests from every corner of the planet. But it wasn’t just the tech titans of the world that students were turning to. Many unknown players have shot to fame and fortune in the weeks and months that followed.

China was first to close its educational establishments, and before long the rest of the world were doing the same. The panic sent parents into a tailspin. Social media was filled with frantic posts from working parents at a loss as to how they’d cope. For many the daily struggle continues, but there’s no doubt EdTech has been a godsend allowing most children and students the opportunity to continue to learn in some shape or form. If these start-ups are anything to go by, this trend should only get bigger and better in the coming years.

In some ways it has levelled the playing field so that no matter where people live on the planet, there’s a much wider opportunity of educational choice available to the masses. Of course, that may be true to a point in the West, but in other parts of the world the divide has never been clearer. In some places, children are now entirely cut off from classroom settings with no access to online solutions at all.

It’s clear why demand is soaring, and a recent report from the Association of Southeast Asian Nations (ASEAN) illustrates the rapid growth in the sector.

The number of top EdTech apps downloaded within the ASEAN more than tripled year-on-year between January and August 2020 (from 6m to 20m). This report was commissioned by Google Singapore, Singapore’s state investor Temasek and US management consultancy Bain & Co. Meanwhile US consultancy firm Frost and Sullivan projects global revenues in EdTech to exceed $41bn by 2022.

Does digital education mark the end of teaching?

While we don’t envisage a completely teacher-free education system, there is no doubt digital learning has earned a meaningful place in the future of learning.

When working well, it can automate the repetitive and mundane aspects of teaching such as marking papers and tackling the basics of punctuation, times-tables, grammar, etc. But that doesn’t mean it will leave traditional teachers obsolete, far from it.

Their time should eventually be put to much better use, in an actual teaching capacity. This will allow teachers to help students be the best they can be, through personalised teaching, coaching and mentoring where they need it most. In a traditional classroom setting, countless children slip through the cracks. But in a situation where teachers are overstretched and schools understaffed, digital learning could help equalise opportunities and spot where children are struggling.

Apps like Duolingo have made learning languages both easy and fun. For those that get the language-learning bug, Duolingo provides a hugely addictive and competitive environment with scoreboards and challenges. Duolingo’s success soared in 2020 and it’s now eyeing a 2021 initial public offering (IPO).

Another fun app that’s gained massive exposure and success in the past year is Kahoot. It’s an app for making quizzes that’s provided hours of entertainment for families engaging in quality Zoom time. The game-based online learning service lets users create and engage in multiple-choice quizzes with family, friends and associates. Kahoot is far from just a one-hit-wonder, though. It’s been around since 2012 and is used extensively in schools and learning environments. It also has backing from some major players in the financial markets including SoftBank, Microsoft, Disney and venture capitalists Creandum and Northzone.

The rise of Kahoot

Kahoot has big ambitions and intends to take full advantage of its elevated position. It’s already listed on Oslo’s Euronext Growth exchange. And now the company intends a full public listing on the main Norwegian stock market in Q1 of 2021. This has it tipped to be one of the first major tech IPO’s to hit European shores this year.

The company is cash positive with $256 million in cash and equivalents and may consider acquisitions in the future. In fact, Kahoot recently acquired a Duolingo competitor called Drops, which purports to be a fun, visual language learning app helping you learn 41+languages in just 5 minutes a day.

Will European IPOs dominate in 2021?

The Kahoot IPO should be an interesting one to watch. European IPO’s were thin on the ground in 2020 with stateside IPO’s having their moment in the sun. But hopes are high the tables will turn in 2021 and food delivery app Deliveroo, money transfer service TransferWise and cybersecurity firm Darktrace are all in the running to list too.

Whether the Covid-19 restrictions continue long-term or not, the digitalization of learning is unlikely to go back to pre-pandemic levels. There’s too much to gain from this space, both as an individual learner and in profitability as a provider. Investors can increasingly get in on the action as many of these firms opt to go public.

While Kahoot and Duolingo are household names there are many lesser known companies making strides in the sector. One such company is KidsLoop, which is now reaching an audience of over 25 million children. It has a highly experienced board and is also considering an IPO soon.

KidsLoop is aiming to transform early years education. By providing the tools and libraries necessary to digitize content, collect data, and make a personalized learning path for each and every student it aims to dominate the landscape.

KidsLoop CEO David Roberts, recently said: “Unlike many other sectors, the pandemic acted as a ‘hyper accelerator’ for the EdTech market. Overnight educational institutions were expected to take their classroom delivery entirely remote, with technology being the only enabler of this.”

Multiverse, previously known as WhiteHat, has just raised £32.3 million in the UK’s biggest ever EdTech funding round. Multiverse aims to provide high-quality education and training through a unique apprenticeship model.

The series B funding round led by General Catalyst, includes notable investors such as Google Ventures, Audacious Ventures, Index Ventures, Lightspeed Venture Partners, and SemperVirens. Multiverse will use the funding to launch in New York and expand throughout the UK. It intends to create 200 new jobs this year.

In 2020 Multiverse trained over 2000 apprentices. It has over 300 clients on its books. Some of these are highly influential including Facebook, Morgan Stanley, Kantar, KPMG, Citi, Microsoft and Fujitsu.

The company is helping bridge the skills gap with an alternative path to employment, rather than university. With a focus on diverse and disadvantaged youngsters, it matches individuals with a suitable career path, and delivers world-class training. This includes one-on-one coaching, virtual events, mentoring and leadership programmes.

In Thailand, accelerator companies are also getting in on the action to help startups get off the ground. This is particularly prevalent in Asia and India. Thai accelerator Stormbreaker Venture and Singapore’s EduSpaze take a small stake in the company and in return provides seed funding and mentorship opportunities to kick start their journey. EdTech companies they’ve recently helped include OpenDurian, Vonder and LingoAce.

LingoAce has since expanded into Indonesia after attracting a $6m investment led by Sequoia Capital India and Shunwei Capital in a series A+ fundraising round. Meanwhile Tenopy, a Singaporean company runs virtual learning workshops utilising the power of artificial intelligence (AI) to bridge the wealth in education gap. It has raised over $1.1m from three venture capitalists in Singapore, China and Japan in the past three years.

Some other notable EdTech companies with over $50M in funding include:

While growth is a given, it’s important to get the balance right. There are clearly many opportunities for EdTech to help students learn. But when it comes to teaching children there’s a fine line between tech literacy and tech addiction. Avoiding the latter is vital for success. Positives that come with EdTech include efficiency, easier accessibility to high-quality teaching methods and mentors, a variety of subjects, interactivity and affordability.

Industry leaders are emerging, but competition remains rife. There are the not-for-profits that purely want to help educate the masses, think Khan Academy. Then there are the apps designed with specific age groups in mind, such as Badanamu: Bada Genius by KidsLoop which is designed to teach early years vocabulary, phonics, STEM and nature. Then there are the companies focusing purely on revenue-generating clients in the corporate arena. All these areas are attracting investment and could present a myriad of public listing opportunities.

EdTech in its various forms has the power to transform anyone’s life and combined with the power of AI, digital education for all could even break equality barriers. It’s a sector that investors should be monitoring closely.