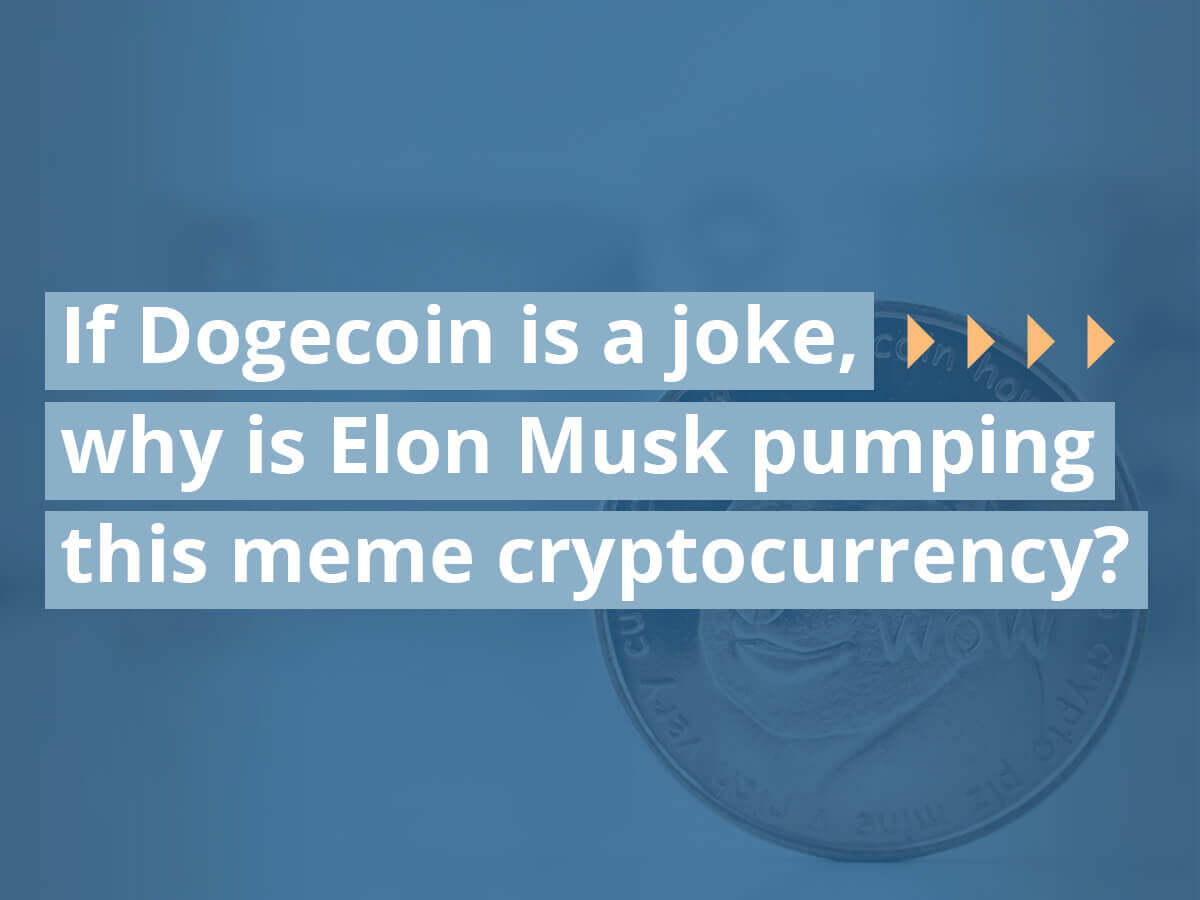 The cryptocurrency market is now worth over an astronomical $1 trillion! For what started as a futuristic concept around 12 years ago has rapidly come a long way. Bitcoin and Ethereum own the lion’s share, but there are many more coins making waves in the crypto markets. Some of these will no doubt go the distance while the majority fall by the wayside. One such asset making headlines is the comically named Dogecoin.

Dogecoin features the face of the Japanese Shiba Inu dog which originated as a meme of the dog with internal dialogue printed in rainbow comic sans font and broken English. The meme took off in 2010 and was voted in the top 10 memes of the year in 2013.

That same year the Dogecoin (Cryptocurrency code: DOGE, symbol: Ð) cryptocurrency was born. It was co-founded by IBM software engineer Billy Markus and Adobe software engineer Jackson Palmer. It’s a decentralized peer-to-peer digital currency. They reportedly created it to make a payment system that was instant, fun, and free from fees. So, they took the original “Doge” meme as its logo and namesake, taking the mickey out of cryptocurrencies such as Bitcoin and Ethereum.

While it’s been around for years, it’s been developing notoriety in recent weeks. The GameStop mania had a part to play in this price surge but Elon Musk took it to a whole other level. The world’s richest man and real-life answer to Tony Stark (Iron Man) has taken a shine to the strange coin. Thanks to his random tweets featuring Dogecoin, its value has exploded in 2021.

Why he’s doing this has many speculating: is he going to resign from Tesla (NASDAQ:TSLA), is he on a self-destruct collision course, is he invested in Doge, is he taunting the US Securities and Exchange Commission (SEC), is this his way of helping the underdog come out on top? It’s since come to light Tesla’s invested $1.5bn in bitcoin, so it turns out his interest in crypto is genuine, even if with Dogecoin he’s simply having fun.

There’s no doubt he’s a strange character and it’s unlikely any of us will fathom how his genius mind works. But all speculation aside, Musk himself said in a Clubhouse discussion last week, “Occasionally I make jokes about Dogecoin but they are really just meant to be jokes,”.

Joke or not, his tweets move markets. The value of Dogecoin rocketed 800% in 24 hours, spurred on by a Reddit board pushing for Dogecoin to become the crypto version of GameStop.

And further boosted by Musk tweeting a parody Vogue magazine cover featuring a dog and the title ‘Dogue’.

And it wasn’t just Dogecoin he caused a price surge in. Linking to a r/wallstreetbets post, he also tweeted ‘Gamestonk!!’ in reference to the GameStop (NYSE:GME) buying frenzy. He also professed his love for Signal, Etsy and Shopify, contributing to share price rises in all of them. The Signal he was referring to is the messaging app, which is not publicly traded, but nevertheless, so many Musk followers jumped into buying shares in a pharma company called Signal Advance (OTC:SIGL), that it led to a 5,675% surge in the otherwise illiquid stock.

Back in 2018 Musk was investigated by the SEC after making speculative tweets about taking Tesla private. His punishment was to resign as chair of Tesla for three years (he could remain as chief executive), pay a $20m fine and stop tweeting about the company. Despite this, it doesn’t seem to have scared him off.

What Drives People to Invest Real Money in a Joke Currency

When the GameStop battle between short sellers and the Reddit army gathered momentum, it sent shockwaves through the markets. The hedge funds were haemorrhaging money, and what started as highly entertaining quickly took on a serious tone. Then the digital trading apps like Robinhood and its peers began restricting trades on the stocks that were getting too much attention. This caused an outcry because people could sell, but not buy, so the prices of these equities inevitably dropped. It was a sad day for many, as fortunes were lost in minutes.

Cryptocurrency is much less regulated than equities so although the price volatility is insane, some people actually feel safer putting their money in a joke coin than in the public markets. Internet subcommunities in places like Reddit and Discord go a long way to pumping these crypto coins and then when celebrities jump in it adds fuel to the fire. Musk wasn’t the only big player to join the “Doge Army”, rapper Snoop Dog and Kiss frontman Gene Simmons jumped in too.

Other than being good for a laugh, one thing Dogecoin has going for it is its super-fast block time of one minute, whereas Bitcoin has a block time of ten minutes. This means Dogecoin transactions are timed quicker and being less popular than Bitcoin, it’s also cheaper to use. However, the big reason it can’t ever beat Bitcoin is because of its infinite supply. Bitcoin is a deflationary currency that can only ever have a maximum supply of 21 million bitcoins. But Dogecoin is an inflationary currency, which means more are being produced constantly and therefore it’s not rare.

So, while Musk might cheer for an entertaining universe where Doge is the currency, it’s not likely to happen here.

“The most entertaining outcome and the most ironic outcome would be that Dogecoin becomes the currency of Earth in the future.”

Which Cryptocurrencies Are Legit?

Bitcoin needs no introduction. It’s the mother of them all and is expected to be financially regulated in the real world to some extent soon. Ethereum is a close contender to Bitcoin. It utilises the blockchain to make accountancy and business practices more transparent. Many Fortune 500 companies are now using Ethereum to enhance their workflow. Ethereum has been making all-time highs recently, with its price exceeding $1600 this month.

Tether is what’s known as a stable coin, it’s tied to the United States Dollar, which should supposedly save it from the insane volatility commonplace in the crypto markets. Tether is a centralized coin, it’s not transparent and it’s not scarce. It’s appeal to investors is its stability.

The Tether market cap is currently around $29bn. Its popularity was soaring but people are becoming suspicious of it’s true purpose with speculation that it may be a way for large institutions to game the Bitcoin price.

It’s even under investigation by the New York attorney general’s office to find out if it has simply been created to artificially inflate the value of Bitcoin. There’s a lot of suspicion mounting around the coin, but if Tether collapses, it’s likely to bring the value of its cryptocurrency peers down with it.

Ethereum’s number one rival Cardano is another cryptocurrency rocketing in value. Fans say Ethereum’s fees are too high and Cardano will beat it. Cardano’s internal cryptocurrency is called Ada.

XRP, otherwise known as Ripple, was once flying high but has recently been destroyed by regulatory tussle.

Like Doge it enjoyed a momentary spike in the GameStop frenzy but that’s since died down.

Meanwhile, Polkadot hopes to be the blockchain that can connect all other blockchains.

Stellar is an open network for storing and moving money. It’s designed so all the world’s financial systems can work together on a single network.

Bitcoin Cash is a fork of Bitcoin. That means it’s a spin-off of the original coin. Otherwise known as an altcoin. In November 2018, Bitcoin Cash split into two cryptocurrencies: Bitcoin Cash and Bitcoin SV to further confuse matters. It’s essentially the same thing as Bitcoin, but the point of Bitcoin Cash was to increase the size of the blocks to process more transactions and improve scalability. At the time there were concerns Bitcoin Cash would become more valuable than Bitcoin, but it didn’t happen. It’s currently worth around $450, whereas one Bitcoin is worth over $39k.

Litecoin is very similar to Bitcoin, but it uses a different algorithm called Scrypt, whereas Bitcoin uses a traditional algorithm called SHA-256. This gives it the advantage of faster transactions. Litecoin has a limit of 84 million coins, so it’s not as rare as Bitcoin and therefore can’t ever be as valuable.

Blockchains are transparent and are becoming popular with real-world businesses. They can’t be edited, and everyone can see them, so they provide a new level of trust. A part of this includes smart contracts that automatically execute on the blockchain as conditions are met. For instance, in shipping, there are many steps along the route where paperwork has to be signed and verified through different jurisdictions. Smart contracts on the blockchain can simplify this process and increase trust between parties. It’s the main reason for Ehtereum’s popularity.

Connecting offline information to blockchain smart contracts in a universal language is limiting. Chainlink intends to solve this problem using oracles, which is software that acts as an intermediary. It’s complicated but Chainlink attempts to simplify the process using reputation contracts and the transparency of the blockchain.

Aside from the array of cryptocurrencies that hope to go mainstream, there are literally hundreds of altcoins making their way in the world. Some being promoted on Twitter today include Syntropy (NOIA), OriginTrail (TRAC), KardiaChain (KAI), and Klever (KLV). Syntropy hopes to transform the public internet into a secure environment with encryption and speed built in. OriginTrail wants to make supply chains work seamlessly. KardiaChain is using the blockchain to provide infrastructure solutions for enterprises and governments in Vietnam and South East Asia. Klever is a decentralized p2p digital crypto wallet available in the app store.

Avoid The Pump And Dump

It’s too easy to get caught up in the excitement and energy of a community group, particularly when the promise of great riches appears to be in reach. But unfortunately, it’s a dog eat dog world and many fall victim to the pump and dump before they’ve even processed what’s happened. This is when a coin or stock is hyped online and talked up so much that you simply can’t bear to miss out, but once the price goes high enough, those doing the persuading sell and it promptly falls leaving those getting in late left holding the bag.

Back in 2017, when crypto hype was at an all-time high, it left many investors nursing massive losses. There was an onslaught of initial coin offerings (ICO’s) that got people super excited and then left them high and dry when they went bust. Fundraising in ICO’s exceeded $5 billion in 2017!

Then there’s the notorious story of Cryptocurrency queen Dr Ruja Ignatova. She persuaded people to invest billions in her Bitcoin rival OneCoin and then disappeared with the money. The story turned dark very quickly, and many ordinary people lost fortunes.

While it’s always going to be tempting to buy something very cheap, on the chance it will turn into a 100-bagger, that’s a sure-fire way to lose your shirt. To sensibly invest in cryptocurrency, it seems sticking with the more widely recognised, such as Bitcoin and Ethereum, is the safest route to success.