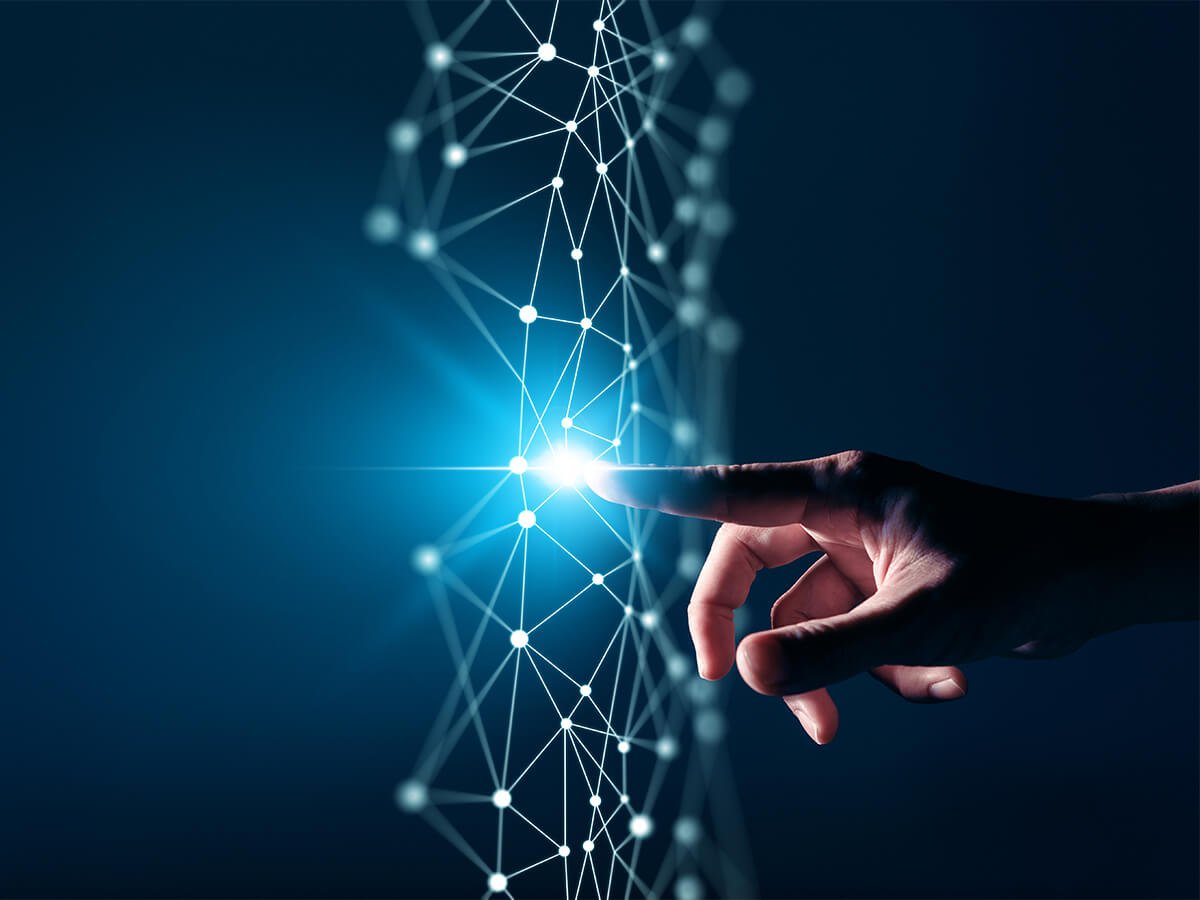 Spatial Computing is a blanket term that covers the combined capabilities of some incredibly disruptive innovations in tech that are making their way in the world. These include:

The word ‘spatial’ is used, rather than location or geography, because it refers to time as well as physical space. And it is the convergence of our physical and digital worlds. For instance, wearable tech helps monitor our body health as well as tracking our surroundings.

Apps such as Fitbit, Garmin, Apple etc can monitor heart rate, pulse, blood pressure and temperature. These can then link into Strava or Runtastic to map a ride or run.

An array of possibilities

There are now countless navigation apps, ride sharing apps for smart phones and precision agriculture, which each use spatial computing technologies. And these technologies are seeing their use and influence on our lives grow at a rapid pace.

Many of these technologies will not be new to you and they’re ingrained within the depths of Cathie Wood’s ARK Invest ETFs, thereby generating further buzz and investment.

The reason spatial computing is such a ground-breaking phenomenon is because it offers the potential to revolutionise our world. And in the process, it could very well displace many of the astoundingly successful businesses of today.

Here are a few notable businesses currently operating in this space.

Augmented reality is rapidly enhancing gaming and entertainment in the consumer space. It also has massive potential for business applications throughout the military, healthcare and manufacturing.

Spatial computing is dependent on 3D imaging techniques, such as those experienced through AR/VR headsets, or glasses-free holographic displays. There are many branded products now in this space such as Oculus, Varjo, Pimax, HTC Vive, PSVR, GearVR, Magic Leap, and many more.

“Spatial computing allows digital content to blend seamlessly into the physical world around you,”

Google now allows us to experience 3D & augmented reality in Search. This is great fun for immersing children in a physical and virtual learning activity.

China’s ahead of the game

In China, many companies are coming on leaps and bounds in this arena. Alibaba (NYSE:BABA, HKG: 9988), Tencent (OTCMKTS: TCEHY, HKG:0700), Baidu (NASDAQ:BIDU), and JD (NASDAQ:JD) have trained, deployed, and monetized deep learning products at scale.

Then there’s US camera application developer Snap (NYSE:SNAP), which uses augmented reality lenses in its arsenal. And the company believes it has a big revenue growth opportunity in boosting its US ad revenue by placing ads in non-messaging products such as its Snap Map and Spotlight video platform.

ARK believes 3D printing is one of the highest growth potential industries in the economy and it’s set to transform the manufacturing landscape.

ARK is a 20% shareholder in Organovo Holdings, Inc. (NYSE MKT:ONVO), a 3D biology company. Organovo is delivering scientific and medical breakthroughs using its 3D bioprinting technology. It has 3D printed a human liver.

The Company’s 3D bioprinting technology creates tissues that are both spatially patterned and three-dimensional.

ARK Invest has also been topping up its holdings in Berkeley Lights (NASDAQ: BLI), now present in its ARKK and ARKG ETFs. ARK currently owns 4.68% of the company. Berkeley Lights uses digital cell biology to advance the field of spatial profiling, allowing researchers to visualise the 3D-spatial organization of genetic material in tissues.

Irena Cronin serves as CEO of Infinite Retina which provides research and business strategy to help companies succeed in Spatial Computing. In an interview last year, she said:

“Spatial computing is all the technology associated with bringing a 3D realm to it’s users… I’m currently working with a company called Mojo Vision, which is working on an augmented contact lens. So, this is another way you could integrate spatial computing into your world.”

“We still have plenty of work to do in the development of Mojo Lens, but our selection by NASA demonstrates a clear desire for innovation in augmented reality and heads-up computing, particularly for space exploration.”

While ARK is invested in both Apple (NASDAQ:APPL) and Tesla (NASDAQ:TSLA), it appears to still view Tesla as the superior company with the most potential. Apple and Hyundai (OTC:HYMTF) (KOREA SE:005380) were hoping to be teaming up to create an autonomous car but the plug’s been pulled on that deal. Now Apple still hopes to launch an autonomous vehicle in 2024, but ARK is concerned it’s too late to the party. Tesla appears ready to launch a fully autonomous driving service within the next two years, and Waymo launched its driverless robo-taxi to the public via a pilot scheme in Phoenix in October.

The self-driving car business requires huge sums of money in research and development and is not an easy business to make progress in. Therefore, the big players such as Tesla and Apple are most likely to be the eventual winners.

ARK holds Apple (NASDAQ:APPL) in both its ARKF and ARKQ ETFs. Apple has some involvement in spatial computing through its various product development processes. For instance, its new iPads are equipped with LiDAR sensors, which combine lasers and radar to provide spatial depths in the external world. LiDAR stands for light detection and ranging. It’s widely used in autonomous vehicle technology.

Tesla is a possibly the world’s biggest player in the ‘spatial computing’ space according to Robert Scoble, self-proclaimed ‘Spatial Computing evangelist’ and possible ‘Tesla evangelist’ too.

“Tesla is solving a major part of real-world AI. This is not widely known.”

US enterprise autonomous drone manufacturer Skydio has raised $170 million in a Series D funding round led by Andreessen Horowitz’s Growth Fund. It’s now looking at a market value of around $1 billion.

In 2019 AiRXOS, a unit of GE Aviation (LON: GEC, NYSE:GE), successfully delivered a human kidney via drone. It travelled from Baltimore’s St. Agnes Hospital to the university’s medical center 2.7 miles away. Drone delivery is an area of spatial computing getting set to transform how interconnected our world is. AiRXOS is working on shaping a new era of autonomous air transportation.

While autonomous vehicles seem new, autonomous tractors have been around for a while. And precision agriculture is another area that’s transforming the way food is produced.

John Deere (NYSE: DE) recently entered into an allied distribution agreement with Smart Guided Systems to sell its Smart-Apply Intelligent Spray Control System for use with John Deere tractors in high value crop applications. This system uses LiDAR to help farmers reduce the amount of chemicals they use on their crops.

AI covers computing that develops machines that think and work like humans. This can be in the form of speech recognition, problem-solving, learning and planning.

ARK invest has a 0.21% ownership of DocuSign (NASDAQ: DOCU) and it’s currently in ARKK, ARKW and ARKF ETFs. Contract law improvements and online notarization is growing, and DocuSign is immersing itself in the AI space. DocuSign Insight uses a proven combination of artificial intelligence (AI) technologies—including natural language processing, machine learning and rules-based logic to help enterprises manage their contracts. This can help reduce the time and cost of reviewing legal documents.

Ecommerce company MercadoLibre (NASDAQ: MELI) is found in ARKW and ARKF ETFs. ARK has 0.16% ownership in the Argentinian company. Back in 2018, MercadoLibre acquired Córdoba-based start-up Machinalis, which specializes in the development of machine learning algorithms.

Fintech company MoneyLion is coming public via a SPAC in a $2.9 billion deal. It’s a modern finance application for individual use. The company uses a combination of artificial intelligence, superior analytics, and machine learning, to analyse customers’ personal finances and deliver uniquely personalized products and services including banking, lending and investing. The blank-check vehicle to bring this to IPO is Fusion Acquisition Corp (NYSE:FUSE).

Then there’s a completely different area of artificial intelligence at work in transforming our energy systems. H2GO Power, in collaboration with the European Marine Energy Centre (EMEC) and Imperial College London, are trialling the use of artificial intelligence (AI) software coupled with hydrogen technology. H2GO is looking to launch a crowdfunding campaign in the future.

Moderna is a US pharmaceutical and biotech company. Moderna’s technology platform inserts synthetic nucleoside-modified messenger RNA (mRNA) into human cells. AI is a big deal in modern medicine and particularly in R&D. It has the ability to lift success rates to up to 50%, while reducing time-to-market, thereby cost saving and profit enhancing. This has been core at the company’s ability to bring its leading COVID-19 vaccine to achieve efficacy levels of 94.5% in a rapid time frame.

Should we be worried about China?

Again, China appears to be making strides in AI that are giving cause for concern to the US. According to a new report released by The US National Security Commission on Artificial Intelligence:

“China possesses the might, talent, and ambition to surpass the United States as the world’s leader in AI in the next decade if current trends do not change,”

And it’s not just AI technology that China is making strides in, the report also mentions quantum computing, robotics, 3D printing and 5G.

A spectrum of possibilities

Spatial Computing covers an enormous array of possible investments in a multitude of exciting technologies and industries. It offers huge scope for innovative improvements in our lives, but it also comes with ethical concerns around privacy and security.

Many big names are already extensively deploying investment in R&D in many of these spatial computing areas. Along with those listed above, Microsoft (NASDAQ: MSFT), Facebook (NASDAQ:FB), Alphabet (NASDAQ:GOOGL), Apple (NASDAW:AAPL), Uber (NYSE:UBER), IBM (NYSE:IBM) and Oracle (NYSE:ORCL) are all involved in one way or another and public government agencies are getting in on the action too.