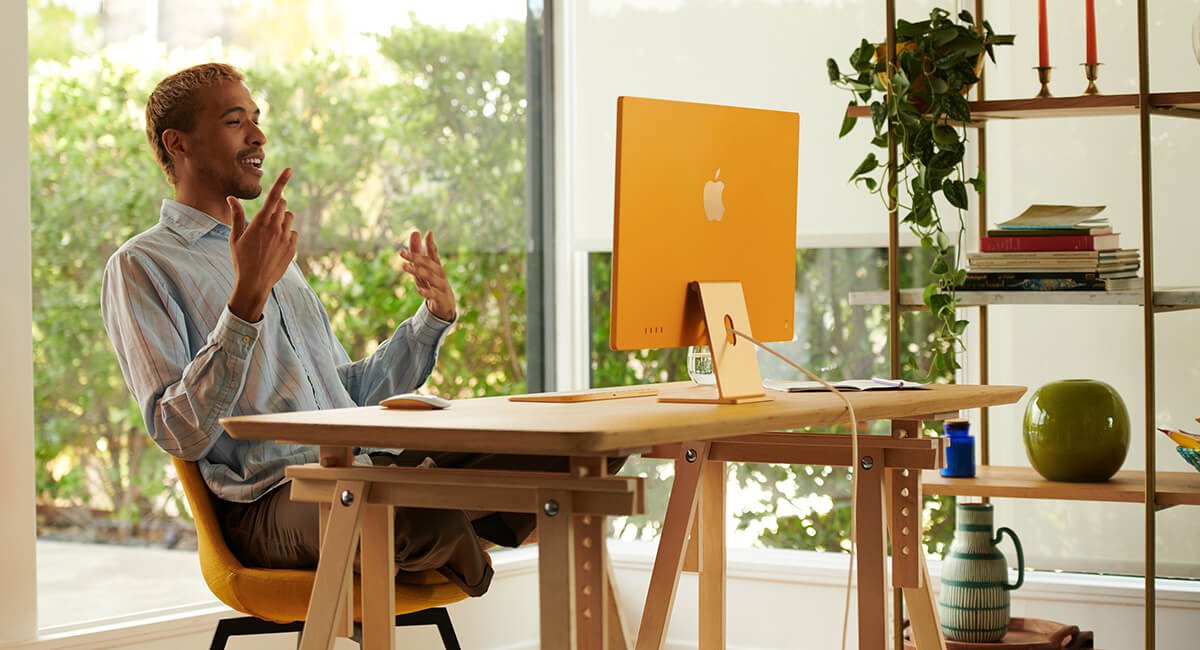 Tech giant Apple (NASDAQ: AAPL) has fans and investors excited with its line-up of snazzy new products unveiled this week. The new range is as glossy and covetable as is expected from the world’s leading tech brand. But does it have what it takes to send the Apple share price skyward?

While its alluring range includes the latest iMac, iPad and iPhone, it’s the new AirTag that’s making all the headlines. The $29 disc attaches to anything and can help keep track of it. Something that’s been long sought after for tracking down lost keys, remote controls, toys, and anything else prone to disappearing.

The Apple share price has been fluctuating in recent weeks. It’s currently sitting around the same level it was at the turn of the year.

Apple fans really love its entire ecosystem and are customers for life. It has brand recognition and loyalty unlike any other. As a big tech FAANG stock, it now has a market cap of $2.22 Trillion. This puts it in a league of its own.

The colorful iMac range has been overhauled and designed in house with its new M1 computer chip. The company claims this chip makes products up to 85% faster. This will also be included in Apple’s most “powerful iPad ever”.

Apple’s Q2 earnings call is due to take place on April 28, 2021. So ahead of earnings, investors are asking if these products make a big difference to the share price?

But it’s growth in its services sector that will really get Wall Street excited, particularly after the poor subscription numbers displayed by Netflix (NASDAQ: NFLX) this week.

Apple’s subscription businesses have gradually been growing in recent years and now include Apple TV+, Apple Arcade, Apple Care and Apple Music. These are all subscription revenue businesses that tie into the Apple ecosystem.

While hardware was traditionally its bread and butter, Apple’s services business is now taking on a life of its own as its second-largest business segment. Therefore, if services growth exceeds analyst expectations, it’s likely to cause them to revise their share price targets upwards.

Ahead of Q2 earnings, Wall Street analysts are forecasting sales of around $77 billion. This comes with seriously optimistic year-over-year revenue growth of 32% and 53% on earnings per share (EPS).

According to Barrons, Wells Fargo analyst Aaron Rakers is anticipating a dividend raise of at least 10% along with another $50 billion pledged to share buybacks. If the dividend is hiked by 10%, it will be the biggest raise since 2018. After the pandemic decimated many company dividends in 2020, any dividend improvements are welcomed by long-term investors.

Meanwhile, Morgan Stanley raised its revenue guidance for this year and next. But it’s reduced its share price target to $156. Today the Apple share price sits around $133.

In Q1, Apple’s free cash flow generation rose to a phenomenal $35.3 billion, setting the stage for bigger things to come.

Apple’s PC sales are expected to soar, while the iPad is the most likely to struggle. With iPhone sales plummeting this time last year, the comparable sales year-over-year are likely to be impressive.

iPhone’s have been leading the smartphone market for over a decade now and it’s top of its game in wearables with the Apple watch.

Thanks to all this top tech, its company value now accounts for 6% of the S&P 500.

Some analysts suggest the higher-end models such as the iPhone 12 Pro and Pro Max will outperform Apple’s cheaper versions. There has been a trend in high-end purchases in 2020, so this may well prove true. If so, it would raise average selling prices and margins.

But the well documented global shortage of semiconductors could have an impact on future revenues for the rest of the year.

The fact is, although Apple has competitors in Samsung (KRX: 005930), and to a lesser extent Huawei, it’s really got very little to worry about in regard to competitors stealing its thunder. Its mix of product offerings includes hardware, software, and services. So, the business as a whole is closer to Microsoft (NASDAQ:MSFT), or Dell (NYSE:DELL), but really can’t be compared to either in its entirety. It’s ultimately a market leader in everything it does.

Nevertheless, investors need to watch out for the regulatory clouds hovering. Apple is defending its business practices before a Senate antitrust committee as it comes under scrutiny for its tightly controlled app store.

Apple’s argument is that tight control of its app store ensures better quality apps and stronger security. But opposition claims it puts developers at a disadvantage and forces them into paying Apple a significant cut of earnings.

One of Apple’s main suppliers suffered a serious ransomware attack on Tuesday. Reportedly by a Russian hacker claiming to have stolen blueprints of Apple’s latest products. This doesn’t seem to have affected the share price, but supply chain weakness is something for shareholders to be aware of.

How the Apple share price performs after its Q2 earnings call remains to be seen. With all its flashy new gear on show, investors will be keeping a close watch.