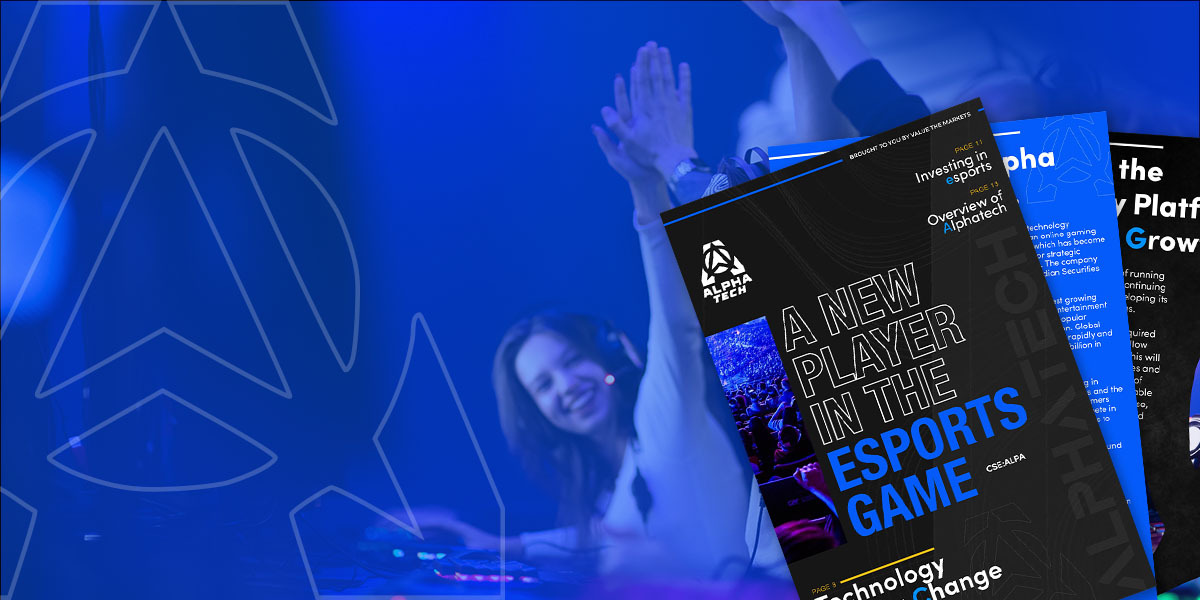 The new up-and-comer in the sports world has officially reached the mainstream, as it’s projected to generate a massive $1.5 billion in revenue by 2023.

It’s already become a varsity college sport just like football or basketball, and they’ve created their own professional leagues.

And there’s also been serious discussion of adding it as an olympic sport.

Which is why CNBC is saying, “esports is a multi-billion-dollar opportunity for forward thinking investors.”

“WITH MORE THAN 2.7 BILLION GAMERS ON EARTH, WE’RE BARELY SCRATCHING THE SURFACE OF WHAT’S POSSIBLE FOR ESPORTS.”

It’s hard to imagine, but competitive video gaming has become among the biggest sports of today.

READ OUR EXCLUSIVE REPORT on why AlphaTech’s esports ecosystem could deliver huge profits as this post-pandemic trend takes off.

And the major events are pulling more eyes than even the biggest sports events.

The 2019 League of Legends World Finals, for example, had 100 million viewers…

That’s more than the Super Bowl or the NBA Finals.

And the number of viewers skyrocketed amidst the pandemic, with people having more free time at home than ever.

The big players in the industry are starting to see profits soar too.

The Wall Street Journal reports that some esports companies saw up to a 70% increase in activity during the pandemic.

And the esports industry has been making headlines again for their massive gains recently.

Take Roblox, for example, who just went public through a direct listing to the New York Stock Exchange.

After shares went on the market, they soared from a suggested price of $45 to $69 on its first day.

Since then, shares have continued to rise, and the company currently boasts a market cap of nearly $40 billion.

That’s the power of tapping into one of the hottest trends on the markets today.

But another small company, Alpha Esports Tech (AlphaTech), is making a name for itself by building out a hugely popular gaming ecosystem for its users.

And it’s driving a huge amount of traffic already.

They currently have over 100,000 users on the platform.

Plus, they’ve partnered with professional organizations to help them grow even faster.

That includes partnerships with the New Jersey Devils of the National Hockey League (NHL), the Vancouver Whitecaps FC of Major League Soccer (MLS), and Wasps Rugby Club among several others.

And recently, they even hosted an event with one of the biggest names in the online gaming space, Barstool Sports.

When they hosted an exclusive 7-day event, helping build out the contest for Barstool, it paid massive dividends.

For Barstool Sports, that meant boosting its following on Twitch by 15% and providing days’ worth of streaming content.

That’s the type of engagement that can get the attention of major players.

And the validation they’ve received from partnering with some of the top teams and organizations is helping bring them to the next level.

It also provides a source for sponsorship revenue for their online tournaments, offering AlphaTech another significant source of revenue.

But they’re finding plenty of other ways to drive revenue as well, while they continue expanding quickly across the globe.

AlphaTech has created a way to drive consistent monthly revenue from GamerzArena through a freemium model.

And it’s a business model users are already accustomed to with many video game platforms following similar plans.

Users are able to take advantage of what AlphaTech has built for free.

But they’re able to get even more premium features when they pay a monthly fee of $12.99.

One of the biggest perks is that paying members have access to tournaments that pay out a higher pot to the champions.

That means users are able to pay $12.99 for the chance to make much more if they win the competitive tournaments.

But they also get a whole host of other benefits.

For example, they get more statistics, along with personalized recommendations to help them improve their gaming skills.

This is in addition to added exposure for the users, helping them get in front of bigger players in the industry who are recruiting for colleges and professional leagues.

CLICK HERE TO DOWNLOAD OUR SPECIAL REPORT NOW and discover why early investors are so confident AlphaTech could take over the 2.7 billion person gaming industry.

That’s more than enough reason for users to pay the equivalent of a few cups of coffee per month for the privilege.

But AlphaTech has also made moves to expand their ecosystem over the last year with a number of major acquisitions.

Which is expected to help AlphaTech leverage these relationships to expand even further and build more important relationships.

Next, AlphaTech acquired the assets of a company called Paradise City, a leader in the mobile esports market.

With this move, they’ll plan to start developing mobile games and tournaments.

That includes augmented reality games with recognizable titles that will be a huge asset in driving new users into their world.

Under the new name of GamerzMobile, this will be significant as it adds another platform to the mix with the broad market of mobile users.

Then in January, they made their latest move to expand even further abroad with the acquisition of Irony Inc.

Specifically, AlphaTech will become the exclusive partner for all of Irony’s online esports events in India, one of the fastest growing markets for esports and mobile gaming.

Through this newest partnership, they’ll operate a variety of gaming tournaments, including an eDevelopment league.

So with their latest moves, they’ve managed to grow their network at home and abroad while adding a whole new user base through mobile gaming.

That puts AlphaTech as a major player in the $159 billion esports gaming market.

And as they’ve continued to grow from North America and Australia to Europe and Asia, they’re well on their way to becoming a global brand in one of the hottest industries on the market.

This communication is a paid advertisement. ValueTheMarkets is a trading name of Digitonic Ltd, and its owners, directors, officers, employees, affiliates, agents and assigns (collectively the “Publisher”) is often paid by one or more of the profiled companies or a third party to disseminate these types of communications. In this case, the Publisher has been compensated by Alpha Esports Tech Inc to conduct investor awareness advertising and marketing and has paid the Publisher the equivalent of one hundred sixty-six thousand US dollars to produce and disseminate this and other similar articles and certain related banner advertisements. This compensation should be viewed as a major conflict with the Publisher’s ability to provide unbiased information or opinion.