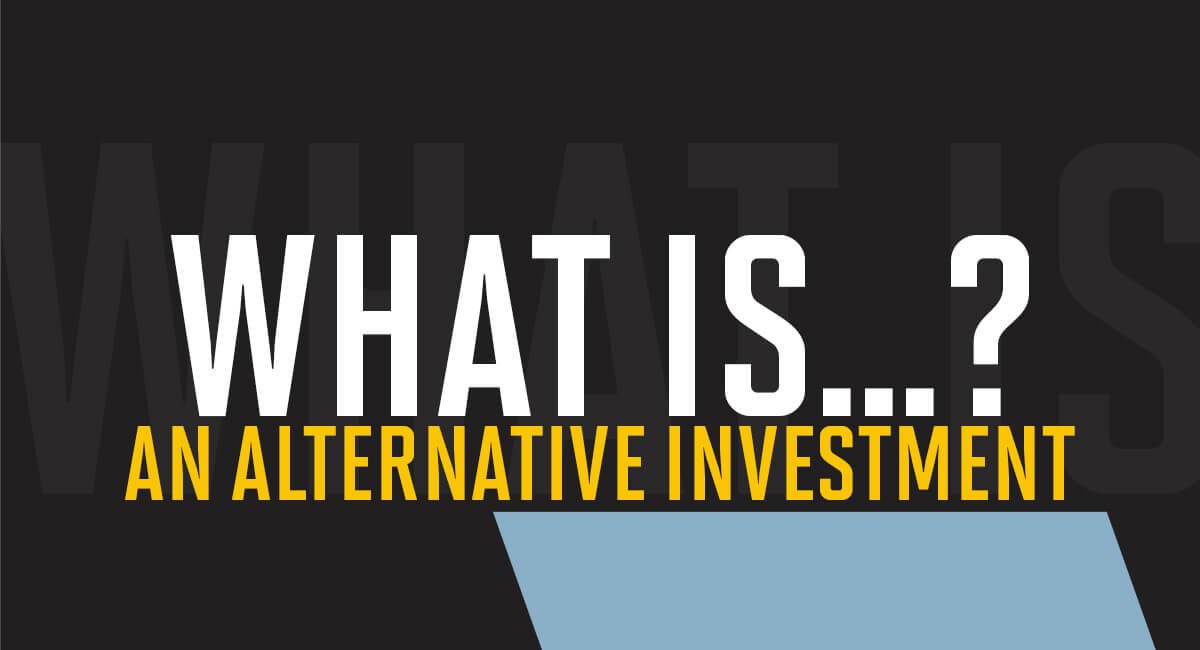 An alternative investments is an investment that falls outside the conventional categories of cash, stocks and bonds.

Because it covers such a huge range of different assets, alternative investments aren’t typically as well regulated as conventional investments. This means they often lay beyond the scope of regulators like the SEC & FCA. As a result of this, it is vitally important that potential investors carry out extensive due diligence to safeguard their portfolio.

Alternative investments also tend to be somewhat illiquid in comparison to conventional stocks. This means that they can sometimes be harder to sell, as interest or trading activity might not be as high. For example, it’s more likely that an investor would find it a lot trickier to sell a rare bottle of whisky than they would shares in a company like Amazon or Google.

How do alternative investments work?

Because of this, a large portion of alternative assets are held by the very wealthy, like institutional investors or high-net-worth individuals. However, through methods such as Exchange-traded funds (ETF), it is possible for retail investors to get in on the action and have their own piece of the pie.

These are sometimes also known as ‘alt-funds’ and they can be a great way for retail investors to gain access to previously difficult and costly asset categories. As an added bonus, because the funds are publicly, they are also registered and regulated by the authorities, providing a little more security for your investment.

Alternative investments can be traced back to 17th century tulip farmers in the Netherlands. As the colourful flowers became more popular, speculation pushed their value higher and higher. At the height of their popularity, they were worth more than 6x the average salary of the country.

Alternative investments also tend to have what’s known as a low correlation with traditional asset classes like stocks. This means that their value tends to move in the opposite direction of stocks. So, when stock prices fall, the value of alternatives investments tends to increase, and vice versa. As a result of this, alternative investments can also be seen as a great tool for diversifying your portfolio.

What follows is by no means an exhaustive list, but represents a broad cross section of different types of alternative investments:

Whether it’s a fine wine or an aged single malt whisky, the collectible drinks market is thriving right now. This asset class has seen astonishing growth rates over the last decade, with the 2020 Knight Frank’s Wealth Report showing an astronomical 564% growth in the value of rare whisky over the last ten years.

Just look at the sale of a 60-year-old single malt from acclaimed highland distillery, The Macallan. In October of 2019, this rare bottling sold at auction for an incredible £1.5 million pounds! Not only was this a world record, it was also an increase of £300,000 on the same style of whisky that was sold a year earlier, emphasising the growth.

Precious metals like gold are among the most well-known ‘safe haven’ assets, with prices tending to rise in times of recession. There are various ways to add precious metals to a portfolio, such as buying physical bullion in the form of minted bars or coins. Or, alternatively, they can buy futures contracts for the metal in question.

Many turned to this asset in 2020 as the Covid-19 pandemic wreaked havoc on stock markets. As a result, gold passed the $2,000 an ounce mark for the first time in history and silver saw a huge spike to more than $20 an ounce from less than $14 at the end of 2019.

Precious metals, especially gold, have benefitted in particular from quantitative easing (“QE”) measures in the modern era. Since such action was introduced in the wake of the 2008 financial crash, the US Federal Reserve has struggled on more than one occasion to stop issuing new credit through QE and reduce its balance sheet. But, each time, markets took fright and the policy was reversed.

Bitcoin is undoubtedly the most well-known cryptocurrency and its value has taken incredible leaps in the past ten years. In April 2011, a single Bitcoin was worth just $1 but it has experienced some incredible growth – and sharp dips – in the years that have followed. Today, the average price of a single Bitcoin will now cost somewhere around $38,000 (accurate at time of writing).

There are also a host of other cryptocurrencies, including high profile examples like Ethereum, as well as the unexpected success story of Dogecoin. Dogecoin was created in 2013 as a tongue-in-cheek response to the cryptocurrency boom and gets its name from a popular meme at the time featuring a Shiba Inu dog.

Volatility in the crypto space makes investment particularly risky. Even the most established of these currencies, Bitcoin, was created just twelve years ago. As a result, the unknowns in this new and emerging space vastly outnumber the knowns, both good and bad.

Crowdfunding involves sourcing money from the population at large rather than a bank or investor group. It comes in a few different varieties, but most relevant to investors are equity crowdfunding, debt-based crowdfunding & peer-to-peer lending.

Equity crowdfunding allows investors to provide funds to businesses in exchange for equity. If the business performs well, investors could expect to see the value of their stake increase. And, in the event of a sale or Initial Public Offering (IPO), shareholders could even realise a considerable return on investment.

In peer-to-peer lending, investors are matched with businesses in need of finance. Interest rates are lower for the business, while investors can access a better return than a savings account would offer.

Altogether, crowdfunding offers investors a chance to build up the kinds of businesses they want to see in this world. Whether that’s a sustainable pet food made with insect protein, or a whisky and gin distillery, there’s something to suit all tastes

What are the advantages of alternative investments?

This is because alternative assets are not so beholden to world events as conventional investments. For example, the desire to own a Rembrandt, or a bottle of Macallan 1926, does not necessarily diminish just because there’s a new US president or a deadly virus outbreak.

Alternative investments also tend to have a fixed, underlying value, unlike actively traded stocks that can dive to zero in a matter of hours.

Chinese writer Zhang Wei famously paid close to 10,000 Swiss francs for just one glass of a fake 1878 Macallan whisky. Thankfully he got a refund, but the story illustrates how real these risks can be.

What are the risks of alternative investments?

As previously stated, while many alternative asset classes have some type of regulation, this is far from universal. It is this lack of policing that has to be the biggest drawback when it comes to this investing style.

Bottom line is, when going it alone – perhaps by building your own art or stamp collection– it can be hard to avoid pitfalls and scams. For example, a painting might be fake or an artist far less renowned than claimed.

Not only that, but alternative investments are also often always in the same asset class. For example, a collector may own a large art collection or several rare stamps, which introduces concentration risk.

Finally, tax changes are also a worry. Changes in tax legislation might bring trouble, but it’s not always straightforward to sell.