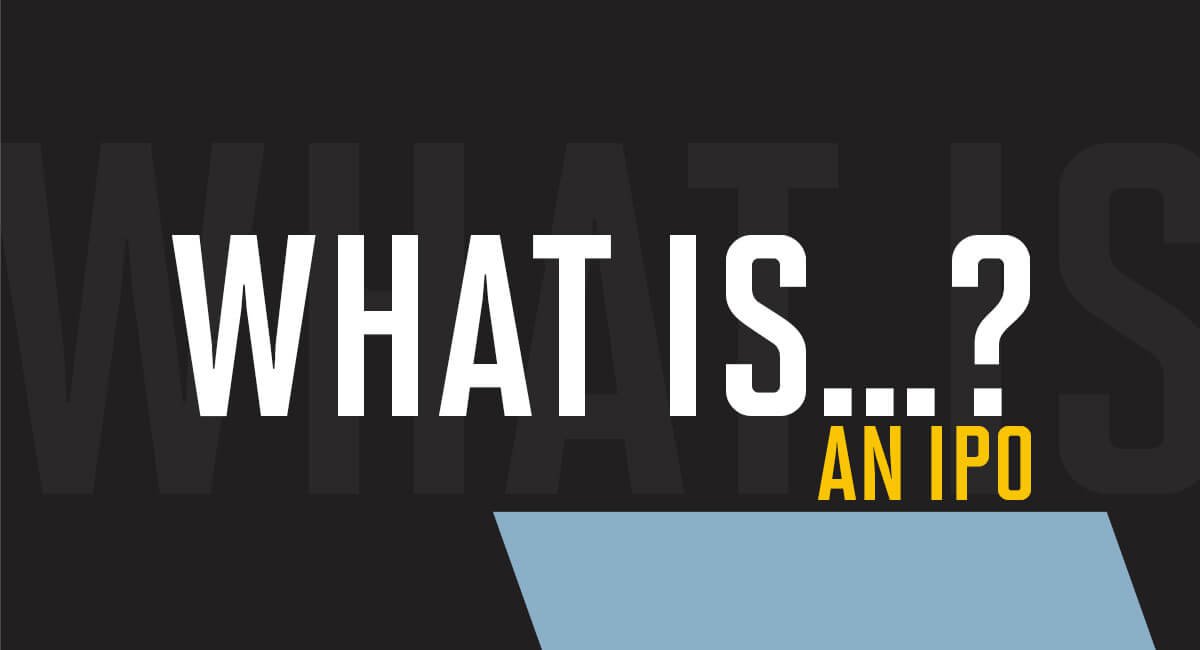 IPO stands for ‘Initial Public Offering’ and is a way of taking a private company public into the financial markets. In doing so, that company is then able to list on a stock exchange such as the New York Stock Exchange(NYSE), the NASDAQ or the FTSE 100.

The point of an IPO is to give the company an opportunity to raise capital from a wider pool of investors. Many companies choose to IPO, so is it something for investors to get excited about?

How does an IPO work?

When a company announces its intention to float on the public markets, it must follow this up with a S-1 filing. This is a U.S. Securities and Exchange Commission (SEC) document outlining its proposal and intentions for the business. In the UK, the equivalent document is called a prospectus.

A company preparing to go public has usually been established for several years and often completed prior funding rounds. This means it has existing shareholders that are ready to sell some of their stake in the business to recoup their investment with interest.

In a traditional IPO, new shares are issued to the public. But existing private investors may also have the chance to sell some of their shares to new investors too.

However, there are usually limitations imposed on insiders selling at IPO. The underwriters employed to oversee the IPO process will require existing shareholders to enter into a lock-up period. This is usually around 180 days, which means they are not permitted to sell a certain amount of their stock allocation for a minimum of 180 days.

What is the purpose of an IPO

Going public via IPO gives a company access to a larger pool of money. It can then use this to grow the business, recruit additional talent, expand its manufacturing capabilities and more.

In addition to this, a public listing tends to raise a company’s profile. This can help add credibility or an air of authority, which may elevate its stature in the eyes of customers and suppliers.

Another advantage is the company can expand via mergers and acquisitions (M&A). It can use company shares to acquire these companies rather than cash or loans.

Sometimes a company will offer shares to its employees as an incentive.

There are various routes to going public. The traditional IPO includes a thorough background check, due diligence on the company financials and executives. It also costs a lot. That’s because lawyers, bankers and accountants must be employed to thoroughly prepare the company for the public listing.

It’s not only the professional fees that raise the cost. Considerable time and effort is required from the company’s management team in preparing to IPO. Going public means a company and its management team is suddenly exposed to extreme scrutiny from potential shareholders and the media. This is not always welcome.

Public companies must disclose their earnings half-yearly or quarterly. Plus, they are legally obligated to inform shareholders of any significant development that may impact the share price.

A direct listing differs from a traditional IPO in that it doesn’t issue new shares. Instead, the existing shareholders agree to sell a portion of their shares to the public. This is a less costly process and comes with fewer regulatory hurdles. Existing shareholders are not contractually obligated to adhere to a lock-up period, so are free to sell as many of their shares as they want.

In recent years, going public via SPAC has become popular. This is a kind of reverse merger where the private company sells itself to a company that is already publicly listed. And then the publicly-listed company usually takes the name of the private company. Recent examples of SPACs include DraftKings (NASDAQ: DKNG) and Virgin Galactic (NYSE: SPCE).

In 2019, Goldman Sachs conducted a study into 4,481 IPOs, to see how they performed. They found that companies that had only been around up to five years prior to IPO did much better than more established companies, with more than 20% extra growth on average over their first five quarters after IPO.

The advantages of investing in an IPO

Investing at IPO can be a very exciting prospect for investors. Share buyers are eager for the chance to pick a winning stock, buying low with a vision to sell high. Perhaps it’s a company that the investor has followed for a long time or become a loyal customer of. Then the investor will feel a strong conviction to buy shares and hopefully profit from the continued progress the company is getting set to make.

When an investor buys shares in a company, they are ultimately hoping that the value of those shares will go up.

If an IPO is priced competitively, then the company could go on to raise its profile and share price. Leading those investors that bought at IPO to profit handsomely.

The disadvantages of investing in an IPO

There are no guarantees that going public will ensure a company’s success.

Analysts and investors will be watching closely for growth in revenues, profits, market share and innovation. If the company fails to meet its targets its share price will inevitably fall. All shares are subject to fluctuation but it’s undoubtedly more prevalent in newly listed company share prices.

If an investor doesn’t have a long time horizon, they may be forced to take a loss on their purchase if they have to cash out before the price has had a chance to rise sufficiently.

Uber Technologies (NYSE: UBER) went public in May 2019. Its share price rose for a month, but then plummeted spectacularly until the end of the year. 2020 was a volatile year for the stock, as the world dealt with the pandemic. Nevertheless, the Uber share price rose and by April 2021, was 45% above its IPO price. This goes to show, patience is often key to realising gains.

Is an IPO a good investment?

IPOs are a mixed bag. Some are oversubscribed, meaning there are more buyers than shares available. Others get a very poor uptake and lose money out of the gate. Some go on to see their share prices soar long after IPO, while others sink like a stone.

It very much depends on the quality of the business, the macroeconomic environment, investor confidence in the prospects of the business and many other factors.

When an IPO is oversubscribed, the underwriters can opt to raise the price upwards or increase the number of shares on offer.

IPOs vary in success between companies, industries, and indices. Generally, the more established a company is, with a clear growth trajectory and solid team at the helm, the more chance it has of being a long-term success.

Although some IPOs offer a bargain, many do not. And many successful investors actively steer clear of IPOs for the risk they entail.