This under-the-radar firm is leveraging world-renowned brands to accelerate its growth...

This under-the-radar firm is leveraging world-renowned brands to accelerate its growth...

Today, it is taking the US market by storm.

From California, where it was first established and continues to be headquartered…

Cookies is commanding a large presence and some of the highest price points in every jurisdiction it has entered.

And now, thanks to a Michigan cannabis company called Gage Growth Corp. (CSE:GAGE), it can add Michigan to the growing list of states it is dominating.

You see, Gage is leading the green revolution in the Great Lakes State.

It’s providing exclusive access to powerful brands like Cookies, leveraging their reputations to elevate its own brand and sales. But it’s also employing a vertically-integrated model to establish itself as one of the jurisdiction’s highest-quality brands.

This powerful foundation has quickly seen Gage become one of Michigan’s premier operators. And that’s a powerful position to be in, given the state was one of America’s fastest-growing cannabis markets last year.

To learn more about the smart model helping Gage Growth Corp. to become the biggest name in Michigan cannabis, DOWNLOAD OUR EXCLUSIVE REPORT

But now, with cash in the bank, rapid near-term growth plans in place, and an industry-leading team behind the wheel….

Gage is primed not only to cement its position as Michigan’s largest cannabis company but also to begin expanding across the rest of the Midwest. 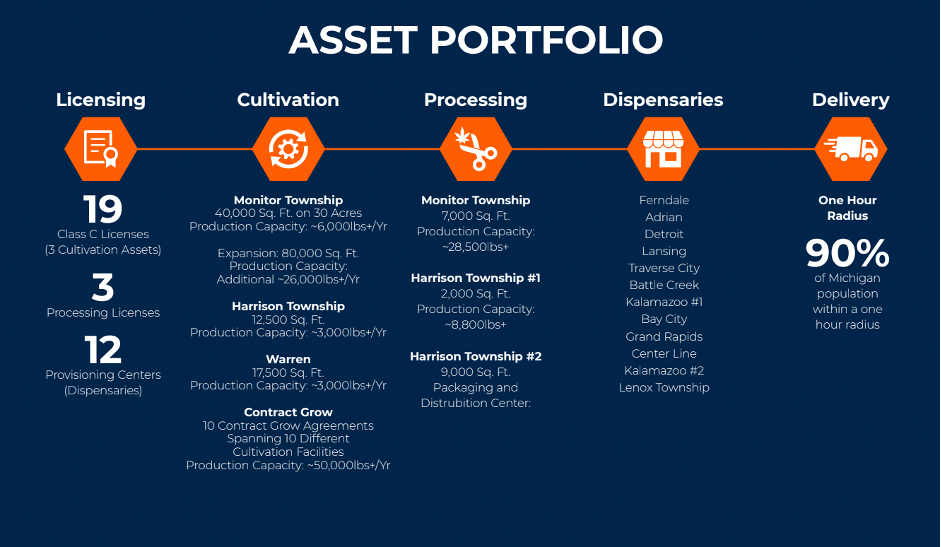 A laser-targeted focus on Michigan

Many new US cannabis companies attempt to establish a presence in a number of states at once. However, Gage has always taken the view that it is better to focus solely on one jurisdiction to begin with.

Indeed, by dedicating all of its money and time to Michigan, the firm stands the greatest chance possible of establishing a deeply entrenched reputation for quality and taking market share.

As mentioned, the firm has already set about establishing exclusive licensing agreements with renowned brands like Cookies. It means consumers in Michigan who have heard of the products these partners offer and want to buy them can only do so through Gage.

That alone is a powerful moat, but consider also that the company has established a vertically-integrated model for its own branded products. It puts Gage in total control of its supply chain – from cultivation to sale – meaning it can ensure its product is of the highest quality and commands the widest margins possible.

And then there’s the company’s team.

The business has taken on the co-founder and former CEO of Canopy Growth – one of the world’s biggest cannabis companies - Bruce Linton as its chairman.

Not only that, Gage has strong institutional support from Jason Wild, a widely recognized premier investor in the cannabis sector. Jason Wild and his US$2 billion fund, JW Asset Management, was notably an early investor in some of the largest cannabis companies, including Canopy Growth Corp. and TerrAscend Corp. JW Asset Management has averaged 27% annualized returns for over 20 years.

All-in-all, this Gage’s expertise, brand quality, and licensing agreements have enabled it to establish a remarkably strong position in Michigan in a very short period of time.

Indeed, from having just one operational asset in mid-2019…

It runs seven dispensaries operating at an industry-leading average run-rate.

The best thing, though, is that the only way is up from here…

Why Invest in Gage Growth Corp

Why Invest in Gage Growth Corp

Back in January, Gage Growth Corp. added an impressive US$50 million to its coffers in an oversubscribed Regulation A, Tier 2, equity financing.

It was a game-changing moment for the business for two reasons.

First, the raise was driven by Jason Wild – the cannabis visionary and TerrAscend's executive chairman who has made life-changing returns for investors by driving the development of some of the sector’s biggest names.

Second, the funds raised give Gage more than enough financial firepower to cement its position as Michigan’s leading cannabis operator by the end of the year.

It expects to open new dispensaries at an average rate of one a month to reach a total of 20+ active dispensaries by the end of the year.

And finally, Gage will also open its own processing lab in the second quarter of 2021.

It all adds together to create an extremely bright short-term outlook for the business that sets the stage for its wider expansion across the US over the coming years.

And what’s more, Gage couldn’t have timed its growth more perfectly if it tried…

You see, Michigan’s cannabis market is on fire.

READ OUR SPECIAL REPORT for a deep dive into the unique and ingenious model that attracted Jason Wild chose to back Gage Growth Corp.

But the market has already grown exceptionally quickly to become one of the largest in the US.

Recreational sales soared a massive 585% from January 2020 to January 2021 and, when taken with medical use, the total cannabis market in the state was valued at almost $1 billion in 2020.

Indeed, a report out of Michigan State University estimates that the state’s cannabis market could be worth a staggering $3 billion by the time it matures. 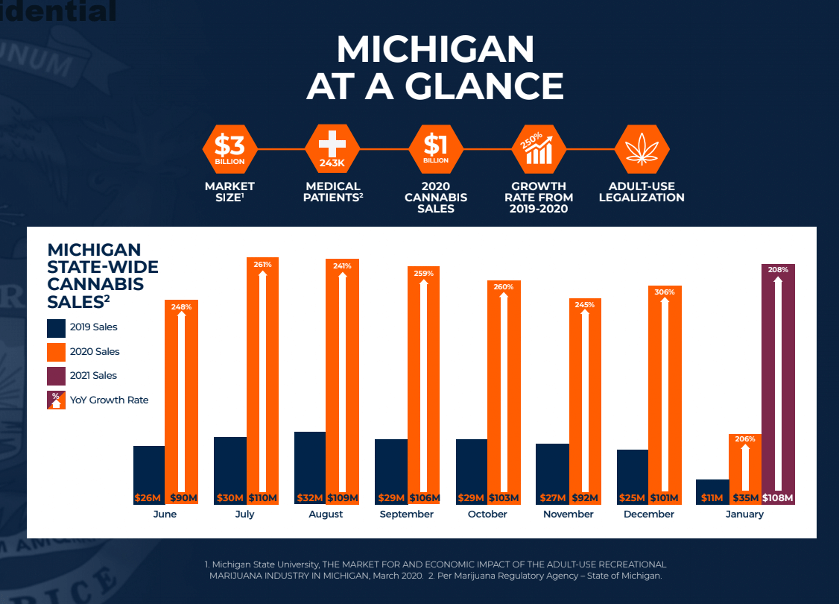 At the same time, in spite of this growth, Michigan is much less extensively covered by large US multi-state cannabis operators than many of the limited license states because it is so competitive.

It all makes it the perfect place for Gage to establish a leading position.

Especially when you consider that many expect cannabis use in the US to swell even further over the coming years. Indeed, the prevailing view is that the Biden administration will remove cannabis from Schedule 1 of the Controlled Substances Act before the mid-term elections.

Should this occur, then the implications for Gage’s bottom line could be enormous.

Move in before the mainstream

All told, Gage is yet to enter the radar of the mainstream, so smart investors still have an opportunity to get in on the ground floor.

It could only be a matter of time before Gage seriously catches the attention of the market and sees its share price soar.

When this happens, those who spotted this opportunity before anyone else and were quick to act will be the biggest winners.

Gage Growth Corp. is innovating and curating the highest quality cannabis experiences possible for cannabis consumers in the state of Michigan and bringing internationally renowned brands to market.

This communication is a paid advertisement. ValueTheMarkets is a trading name of Digitonic Ltd, and its owners, directors, officers, employees, affiliates, agents and assigns (collectively the “Publisher”) is often paid by one or more of the profiled companies or a third party to disseminate these types of communications. In this case, the Publisher has been compensated by Gage Growth Corp to conduct investor awareness advertising and marketing and has paid the Publisher the equivalent of five hundred thousand US dollars to produce and disseminate this and other similar articles and certain related banner advertisements. This compensation should be viewed as a major conflict with the Publisher’s ability to provide unbiased information or opinion.