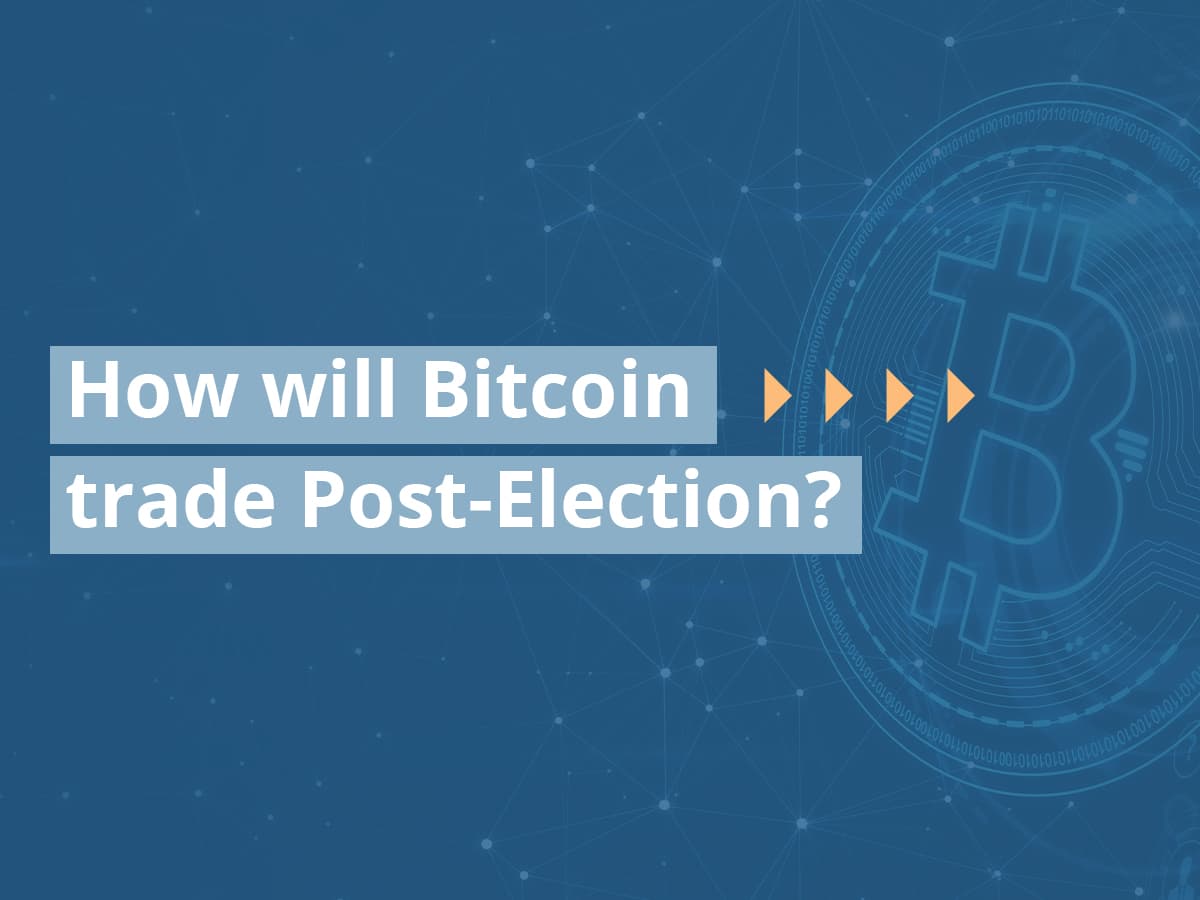 All eyes are on the US election this week, and even with only one day to go, there is still considerable uncertainty surrounding the outcome. As bitcoin hovers around its 12-month high of $14,000 there are some who feel it has further to go irrespective of whoever wins the election. Bitcoin has had a sensational year, and its price has soared in the past few months. From over $10,000 in February, it lost half its value in the March market crash, plummeting to less than $5000, but since then it’s enjoyed a steady climb. There have been fluctuations along the way, which is par-for-the-course with cryptocurrencies, but it’s now sitting above $13,500 for a single coin. So, the question is, will the US election outcome cause its bull-run to end, continue, or will it have no effect at all?

Some big-name market analysts and pundits have been increasingly bullish on bitcoin this year, adding to the hype. But the most significant shift in recent weeks is an acknowledgement from some dependable places, giving weight to its credibility as a viable digital asset. These established organizations include JPMorgan Chase & Co. (NYSE: JPM), Square Inc (NYSE: SQ) and Paypal Holdings Inc (NASDAQ: PYPL), plus lesser known business intelligence company MicroStrategy Incorporated (NASDAQ: MSTR).

When bitcoin was enjoying a previous bull-run in 2017, it was en route to reach $20,000, momentarily peaking at $19,783.06 on December 17. This wasn’t to last, but interestingly at that time, Jamie Dimon, chairman and CEO of JPMorgan Chase, called bitcoin a fraud, threatened to fire anyone trading it and publicly ridiculed his daughter for owning it.

Just this month, however, JPMorgan has done a complete U-turn with its Global Markets Strategy group touting bitcoin as a viable alternative to gold among millennials. Even going so far as to suggest it could double or triple in value if its current trend continues. JP Morgan Chase then announced it has set up its own dedicated cryptocurrency business unit called Onyx. Dimon later stated he regretted his 2017 stance on the crypto asset.

Meanwhile, Square, which is owned by Twitter founder Jack Dorsey, invested $50 million in bitcoin and PayPal said it would let its users buy a selection of cryptocurrencies, including bitcoin and ethereum. This is particularly significant, because PayPal has close to 300 million customers, making it the equivalent of the 21st largest bank in the US.

MicroStrategy kicked off this shift in attitudes with its $250 million bitcoin purchase in August, which it has since increased to $425 million. Its CEO Michael Saylor has also personally purchased over $238 million worth of BTC holdings for the long-term.

Some have asked how much #BTC I own. I personally #hodl 17,732 BTC which I bought at $9,882 each on average. I informed MicroStrategy of these holdings before the company decided to buy #bitcoin for itself.

Will a Biden or Trump win change Bitcoin’s direction?

This shift in attitude has more to do with the state of the world economy and little to do with the US election. Therefore, whether Biden or Trump takes office should make little difference to bitcoin’s stratospheric path. Nevertheless, it’s likely to face volatility of some kind throughout the coming months.

If Trump wins, Biden supporters will be up in arms and some believe rioting will get a whole lot worse. If Biden wins, the same could happen from the Trump side. Either loser may be encouraged to contest the result, leading to further uncertainty in the coming weeks.

Investors globally are impatiently waiting for news of further government stimulus, to keep the economy ticking over throughout the winter months, particularly with the Christmas shopping season underway. With no announcement as yet, the S&P 500 has been wobbling, further boosting the case for bitcoin and alternative assets.

Dutch institutional investor @PlanB* is one such bitcoin bull not ready to throw in the towel. He believes if the president brings a big stimulus package in immediately after the election, this is great news for bitcoin. Trump has already stated he’ll do just that, but many speculators believe the result will be the same if Biden becomes president, because he’ll have no choice but to stimulate the economy. However, there is concern for short-term trouble ahead because if Trump loses, he’ll remain the official president until mid-January 2021, during which time he may refuse to sign the stimulus bill and therefore delay any coronavirus relief package until Biden takes office. If this scenario pans out, it would more than likely add further fuel to the bitcoin fire.

This is good for #bitcoin ? https://t.co/bYzB1NxPa8

The consequences of central banks, printing an endless stream of money, is destructive, but bitcoin stands to benefit as investors diversify into the original digital asset.

As the world faces, the likelihood of inflation as one of the few ways to escape the exorbitant global debt, and as yet no solution to the raging pandemic; a self-regulating system, with no official organization in charge, is understandably gaining support. Unlike the tidal wave that took bitcoin hurtling towards $20,000 in December 2020, bitcoin is now being embraced by the established investment community rather than simply retail investors encouraging their nearest and dearest to buy, drug lords, and a tiny proportion of minor hedge funds.

Billionaire investor and hedge fund manager Paul Tudor Jones has been hailing the merits of bitcoin since he began recommending it to clients in March and April as a hedge against inflation. He believes investing in the asset now is similar to investing in the early days of Apple Inc. (NASDAQ: AAPL) and Google (Alphabet Inc Class A (NASDAQ: GOOGL)).

“I think we are in the first inning of bitcoin and it’s got a long way to go,”

While he was convinced back in May, the community’s reaction to his decision has served to reinforce his confidence in bitcoin and brought him to a new level of understanding in its strength.

“what I learned was, and what I was so surprised by is that bitcoin has this enormous contingent of really, really smart and sophisticated people who believe in it.”

The collective power in the backing of its global community combined with their intellectual capital has given him even more of an assured outlook on the future of bitcoin as a main player in the investment stratosphere.

In recent years, but particularly in the wake of Covid-19, investing has rapidly evolved. Millennials and Generation Z-ers can now buy fractional shares at the click of a button from their mobile devices. They can instantly buy half a share of Tesla, while stopping for a coffee in Starbucks and trade Starbucks while in there. They can trade in and out of stocks with as little as a dollar and no fees to contend with; thanks to the rise of apps like Robinhood in the US and Trading 212 in the UK. Their digital savviness also serves them well when it comes to investing in crypto. They’re not easily daunted by it and find the reason for investing in it makes perfect sense.

Some people say bitcoin has no intrinsic value, but how different is that to gold? Gold is accepted because it has been around for so long. The size of the gold market versus the value of the bitcoin market is vast. The market value of all bitcoin in circulation equates to just 1-2% of all gold above the ground, so if the weighting was to increase to 5% of all gold, the bitcoin price would be looking more like $30,000 a coin!

Eclipsing Oil, Gold and the US Dollar

Throughout the past 75 years, the US dollar has generally been considered a reliable store of value. It’s the most widely owned fiat currency in the world and recognized as the global reserve currency of choice. Unfortunately, confidence in the dollar has been slipping in 2020. While it’s still used to denominate and settle most international trade, the political and social unrest apparent across the US is making investors nervous of its future place in the global power struggle. Even prior to Covid’s arrival the US was printing and spending money like crazy. But the pandemic took this to a prize-winning level. In the blink of an eye, the US dollar supply in circulation had increased by an astounding $3 trillion.

This stimulus is intended to kick-start the economy and keep general economic transactions under control, ensuring ordinary citizens can continue to buy groceries and their vital consumer goods. It’s not yet clear how effective this will be in filling the employment void the pandemic has created, but with no vaccine yet in circulation, concerns are mounting.

And it’s not just concerns for the US dollar, the whole world is increasing its debt and the price of oil has really been hammered by the crisis. Other commodities have so far fared well this year, but there’s still a selection of investors that believe bitcoin is the only truly viable long-term hedge against inflation.While bitcoin is unlikely to become a digital currency, there is increasing weight being given to its prospects as an alternative store of value.

Gold still has a strong investment case as a protection against inflation, but it’s simply not as scarce as bitcoin. While gold can be subject to supply shocks, bitcoin has a determined and fixed supply and mining for it doesn’t have to meet stringent environmental, ethical, social and governance rules.

In less than a decade, bitcoin has gone from being little more than a concept to having a market cap of over $200 billion. Gold already in circulation, is thought to have a global valuation of approximately $9 trillion. That’s a conservative estimate, but if bitcoin is to be compared to gold, then it’s currently undervalued by 45 times. In this scenario, bitcoin could effectively increase by 45x to $500,000 US dollars per coin. Although that seems far-fetched it’s easy to see how bitcoin still has far to run. If individual bitcoin ownership is currently around 1-2% of an investor’s portfolio, it wouldn’t take much to raise that to 5%, at which point the price of bitcoin would soar above $30,000.

If cryptocurrency ETF’s become mainstream, then that will create another crucial turning point for the asset. For ordinary investors that find the prospect of buying digital currency daunting, it would make the process simple and rapidly bring a massive influx of money from many new sources. The Securities and Exchange Commission (SEC) is already reported to be working on regulations that could pave the way to permit cryptocurrency versions of ETFs, so this is not out of the question.

While it’s unlikely that the US election result will have much bearing on the investment case for bitcoin, it will more than likely cause increased price volatility. Nevertheless, it appears bitcoin’s 2020 bull run is far from over and 2021 looks increasingly exciting too.

*According to Google, PlanB @100trillionUSD is a Dutch institutional investor with a legal and quantitative finance background. He created the bitcoin Stock-to-Flow (S2F) model where he uses scarcity to quantify the value of bitcoin. In recent months, his fan base has grown considerably.