Despite emerging from a difficult 2016 with a strong balance sheet and healthy cash flow generation, shares in Kurdish oil and gas firm Gulf Keystone Petroleum (LSE: GKP) have languished in recent months. After having their fingers burned, investors are cautious of geopolitical tension in Gulf’s native Kurdistan and the volatile oil market, which is still recovering after collapsing by as much as 70pc in 2016. But with Gulf preparing to invest in increasing production at its Shaikan oil field as geopolitical pressures cool and oil strengthens, it could well be worth taking advantage of this weakness before its too late.

Gulf’s share sat at all-time lows throughout 2016, dropping to as little 1.2p. For comparison, its shares sat as high as 221p in 2013. The firm has historically had consistently to battle cash flow problems at its Iraqi oilfields; at one point it was owed as much as $100m from the Kurdistan government for oil exports.

This was largely driven by Daesh’s continuing threat against the Kurdistan Region of Iraq. With Kurdistan’s security forces forced to defend Kurdistan’s border, the area’s financial position suffered, reducing its ability to meet the revenue requirements of Gulf Keystone and other oil firms in the region.

This reached a head in April 2016 when the firm defaulted on a $26m (£19.5m) debt payment. In response, Gulf launched a balance sheet restructuring in July 2016, which saw its creditors agree to a $500m debt for equity swap.

The restructure, which completed in October 2016, resulted in huge dilution for Gulf’s shareholders, increasing its total number of shares in issuance to 23bn, considerably more than its peers. However, in December that year, shareholders agreed to consolidate this to just 229.4m shares, resulting in shares being repriced from 1.2p to a far more palatable 123p.

Although undoubtedly painful for shareholders, Gulf’s moves reduced its debt from over $600m to just $100m, increased its liquidity, and allowed it to enter 2017 back in line with its peers, ready to start again.

A look at Gulf’s first half results – the last set published by the firm – reveals just how far it has been able to come this year.

The firm was free cash flow positive throughout the period and received five payments from the Ministry of Natural Resources of $15m, suggesting the cashflow problems seen in 2016 have majorly improved. It also managed to reduce its gross operating cost per barrel to $3 from $4 in 2016.

Things have also calmed down somewhat for Gulf geopolitically, with the defeat of Daesh in Mosul, which is near the firm’s major operations. However, chairman Keith Lough acknowledges that conditions remain challenging Meanwhile, despite ongoing volatility as a result of uncertainty around Opec’s influence over pricing and US shale production, oil prices have steadied around the region of $50 a barrel.

Despite improving financials, Gulf’s shares have gradually declined throughout the year from 140p to 91p (last seen). I believe that this price is failed to acknowledge improvements at the firm and opportunities for further growth.

The company currently has a price to earnings ratio of 2.56X, although this is likely being held back by the geopolitical risk. Its price to sales ratio is currently a very low 0.9X, suggesting possible undervaluation.

In its half-year results, the firm said it can reach this number in the near term by performing ESPs and maintenance on existing wells.

Gulf plans to invest in these operation ‘as soon as possible’ once a commercial framework is agreed with the Ministry of Natural Resources and its partner MOL, something which has been progressing nicely this year. According to Gulf:

‘The lack of commercial visibility is a hindrance and prevents us from progressing our preferred strategic direction of further investing in Shaikan, in order to increase production. However, the Board notes the recent positive developments regarding the commercial terms agreed between the Ministry of Natural Resources (“the MNR”) and other international producers and draws comfort from this positive momentum,’

‘Whilst continuing to maintain a rigorous and disciplined approach to its cost base, Gulf Keystone remains cash flow positive and well placed to invest in increasing production from Shaikan, once the required commercial framework exists for that to happen.’

With the firm currently having a market cap of £205.5m at just 34,525 barrels of oil per day of production and very little profit, these figures suggest plenty of upside.

However, investors must be willing to take the risk that the geopolitical factors and relations with Kurdistan’s government continue to improve, something that not everyone will be comfortable with.

From a technical viewpoint, Gulf Keystone had a good go at a breakout in September, but lost all of its gains in October, hitting a new low.

There was some level of recovery in November, but as we enter the final month of the year, the price action is in the lower echelons of the chart.

All may not be as negative as it seems though. The price is moving within a Falling Wedge pattern which may indicate a reversal is on the cards.

A fresh base is currently forming around 91.7p and should that fail, the next ledge down is at around 90p.

The only spoiler at this point would be a lower low, but looking at the Relative Strength Index (RSI), its already approaching very oversold. 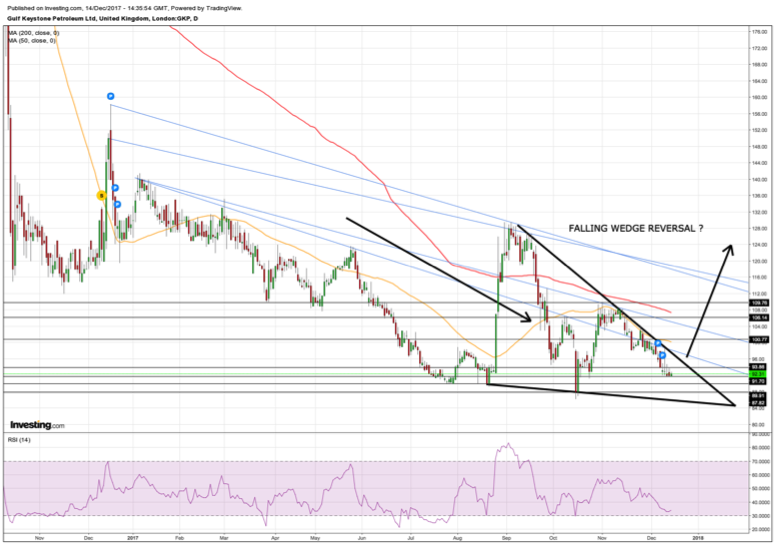 Investors are understandably cautious around Gulf due to large problems in 2016 which are yet to be fully resolved. However, with the company’s financial situation greatly improving since its restructure and a large investment in increased production on the horizon, a well-placed punt could prove to be highly lucrative.

The author of this piece does not own shares in any of the companies covered in this article.