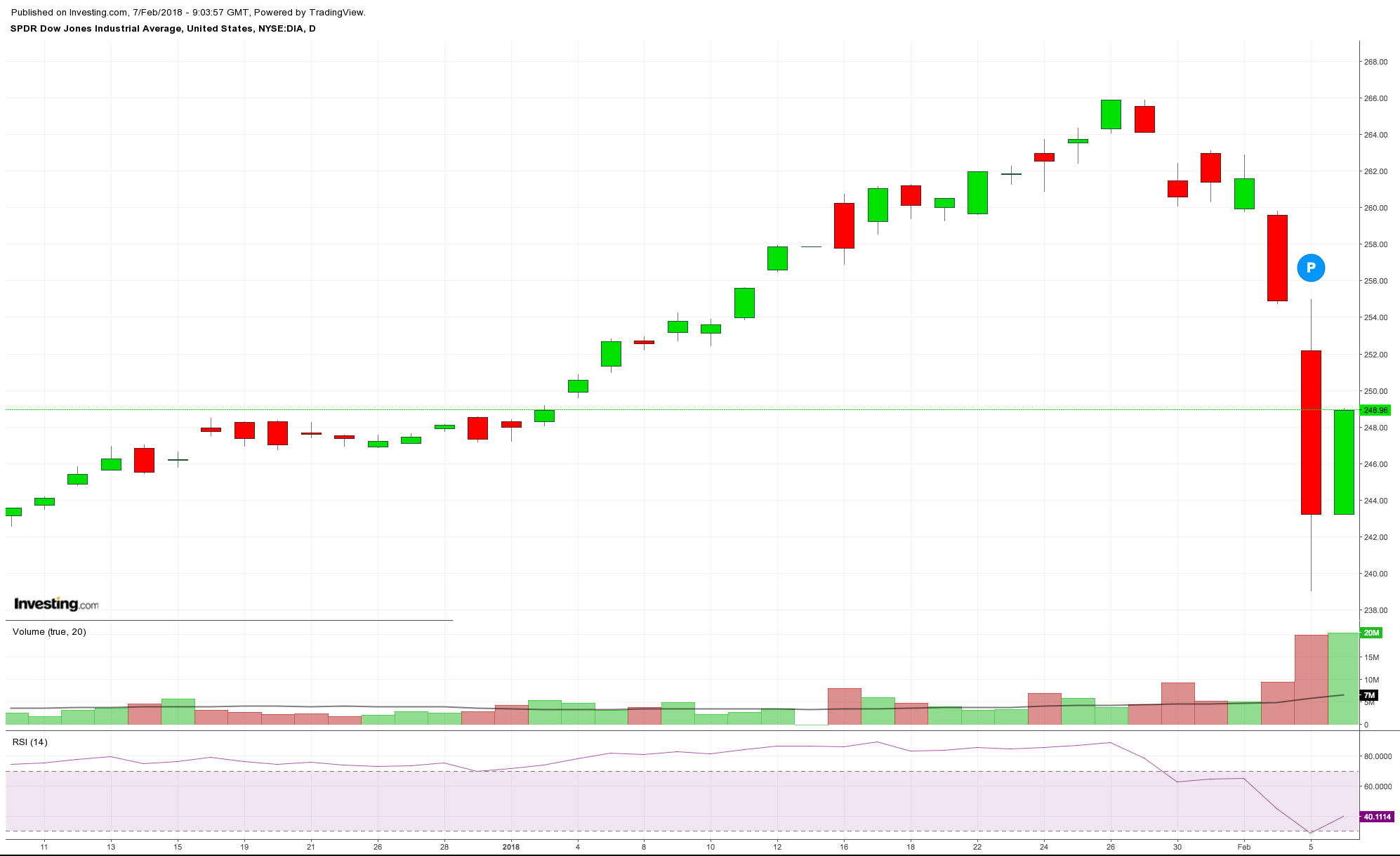 Global markets are deep in the red today after Wall Street suffered its worst one day fall in six years on Monday, but with key indicators of market stability holding up this rout is likely to be a correction rather than a full-blown crash. The FTSE 100 was down by around 2pc in mid-morning trading, paring earlier losses of as much as 3.5pc, while Frankfurt’s Dax and Paris’s CAC were down 2pc and 1.6pc respectively. Earlier in the day, Japan’s Nikkei 225 ended trading down 4.7pc, its worst one-day fall since November 2016, which took it took a four-month low.

The sell-offs followed a bloodbath across US markets on Monday which saw the benchmark S&P 500 fall by more than 4pc and the Dow Jones Industrial Average drop by 4.6pc. These are the largest percentage drops in a single day’s trading for US markets since August 2011, wiping out all gains made by both indexes so far this year. The current global market rout has widely been put down to a sharp rise in US bond yields as expectations are of further rate rises driving a sell-off in the fixed income market.

Yesterday, the yields of 10-year Treasuries – widely viewed as a proxy for the cost of medium-term borrowing – pushed past 2.8pc before easing back to 2.71pc today.

The bond market sell-off was exacerbated on Friday when US data showed that average hourly earnings increased by 2.9pc year-on-year in January, their fastest pace since 2009, while unemployment sat at just 4.1pc. Wage growth has long been missing from the US recovery story, so Friday’s figures promoted speculation that its sudden presence will begin to stoke inflation in the country, which currently sits at 2pc.

With upcoming Republican tax cuts and higher public spending also set to add fuel to the US recovery, analysts believe the Federal Reserve – America’s central bank – may end up having to step up the pace of rate rises to cool its economy. Some economists are now penciling in four US rate rises this year instead of three, and investors have become worried that central banks around the world will end up having to pull away monetary stimulus sooner than anticipated.

Large stimulus programs like quantitative easing – which sees central banks create money by buying securities such as government bonds with cash that did not previously exist – have helped to prop up markets since the financial crisis. One argument is that their removal will reveal that a number of highly-valued stocks lack strong fundamental value and looked healthy under false pretenses. As a result, the VIX index – a popular measure of market volatility and confidence in stocks often known as the ‘fear index’ – has more than doubled in one week and closed at 39.94. At the time of writing it is closing in on 50, where it is likely to heavily influence markets. The only times it has been higher than this were the dot-com crash in 1999, the credit crisis of 2009, and when S&P downgraded US credit in 2011.

The spike in the Vix was likely triggered by the Dow Jones briefly slipping below its 200-day moving average yesterday before quickly rebounding back above it. But as long as markets stay above this 200-day moving average we believe the bull market will remain and investors are better off exercising some caution than breaking into full-scale panic. Indeed, rather than a full-blown crash, the resilience of several market indicators points towards a correction caused by equities increasing in value too quickly due to investor overconfidence and the influence of loose monetary policy.

In periods of heightened market risk, gold usually surges as investors flee to the safe-haven asset in order to protect themselves from volatility. Despite soaring inflation being touted as the reasons behind the current market rout, gold prices have remained relatively sanguine since the beginning of the month. As the chart below shows, gold currently sits at $1332/oz, $8 lower than the $1340/oz it sat at when the US jobs data was released on Friday.

Furthermore, the St Louis Financial Stress index, which measures the stress of financial markets, currently sits far below 0, suggesting below average financial market stress. As the chart below shows, it is also way off the highs seen between 2008 and 2009. This suggests there is plenty more liquidity in the market now than the debt which riddled the financial system during the crisis.

Fears that the US bond sell-off could imminently spread to global fixed income markets may also be overcooked. Although the Fed is taking a hawkish tone, the Bank of Japan said it would keep monetary policy steady for ‘as long as possible’ at a meeting last month. Likewise, the European Central Bank kept its interest rates at record lows last month.

Equity markets have long been overdue a correction, with a tech-driven rally in the US leading valuations to get ahead of themselves and global markets following suit. Once markets have calmed, investors must remember that Friday’s US data suggests the country is expanding. This could be the first step in ushering in an era where asset prices have not been inflated by central bank policy.