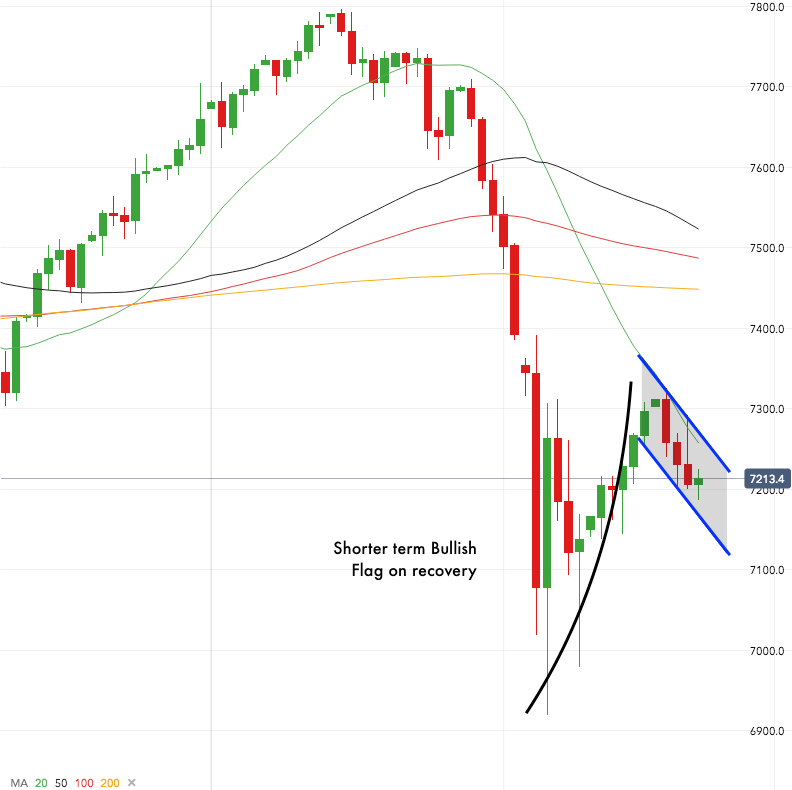 World markets are fast approaching a critical phase – one that decides whether the post-correction recovery is going to continue or not. With a glance over the global indices, it’s even more evident; we’re at an important juncture.

The correction earlier this month sent shock waves through the market and served as a stark reminder that the rug can be pulled from beneath our feet very quickly indeed. For the sell-off to remain a ‘correction’ and not be upgraded to the potential beginning of a crash, the recovery of the indices must continue with conviction. After such a bullish run, and signs that stocks are already in a market melt-up phase, investors are naturally wary and what happens next is critical for this almost decade-long bull market.

A look at the FTSE 100 chart today shows both bullish and bearish scenarios are in the balance. Price movements since the correction have formed a potential continuation flag. The pattern is a smaller parallel channel of price action against the wider direction of the market. It’s often recognised as indicative that the market will continue its general trend when the price breaks out of the channel. In contrast, we now also see a smaller, bullish flag pattern developing on the recovery price action since the correction.

All will play out soon, and we will discover which flag becomes validated. Once the direction is decided, it seems inevitable the market will make a strong move either way. Of course, the global indices are all interlinked, looking to each other for direction. America invariably takes the lead, so do the US indices furnish us with better clues to where the markets are heading?

As you would expect, the Dow Jones has had similar price movements to the FTSE. One distinct difference between the main UK index and the Dow is the FTSE is now below its key moving averages, (50, 100, 200 MA. it’s even below the 20 DMA at present which is acting as resistance. The German DAX index is in a very similar position, and a move past the 20 DMA would be a steadying first step to confirm a recovery.

Back to the other side of the Pond again, and we can in the image of US indices above that the Dow has come back down to test its 100 DMA after the 50DMA proved to be strong resistance. A symmetrical Triangle has been formed during the recovery period. More often than not this pattern formation results in the continuation of an existing trend, so in this case, might be bullish.

The Nasdaq is arguably the most bullish of the US indices, having brushed off a close encounter with its 200 DMA, it’s recovery smashed through its 100 DMA and now sits confidently above the 50DMA.

In the real world, there are so many fundamental factors in play, which we will cover in a separate piece today. To name a few, Trump’s cuts to corporate taxes and pick for Fed Chair are both very bullish for equities. However, juxtaposed to this, debt is running at potentially disastrous levels, while inflation is pressuring world banks to increase interest rates. This against a backdrop of world economies continuing to stack up problems that are put aside with Quantitive Easing measures. Investors are rightly anxious for clues to where the indices will next be heading.