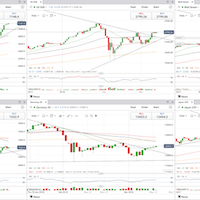 There has been a tension in the air since the worldwide market correction in February, but things are looking bullish again. Well, the major indices do, even if real life suggests conditions are far from healthy. Time will reveal if this is a genuine bullish breakout or an opportune chance to ‘get out’.

The Nasdaq led the way, carving new all-time highs with a strong move on Friday. The S&P 500 is up next in the bullish-recovery roll of honour. The index has managed to trump its last 2 highs since the correction and can also claim higher lows, plus a break from diagonal resistance.

Both the Nasdaq and S&P 500 are comfortably above their 50 Day Moving Averages (DMAs). The Dow Jones is currently playing with the 50 DMA and hasn’t broken its micro downtrend just yet. In Europe, the German DAX and UK, FTSE 100 are showing some green shoots of recovery but still, need to form higher highs to appear convincing. It’s a similar story in Japan with the Nikkei attempting a break of its diagonal resistance trendline. Whether we are witnessing the calm at the centre of a brewing storm, or a genuine breakout to potential new highs remains to be seen, either way, it’s prudent to throw caution to the wind.