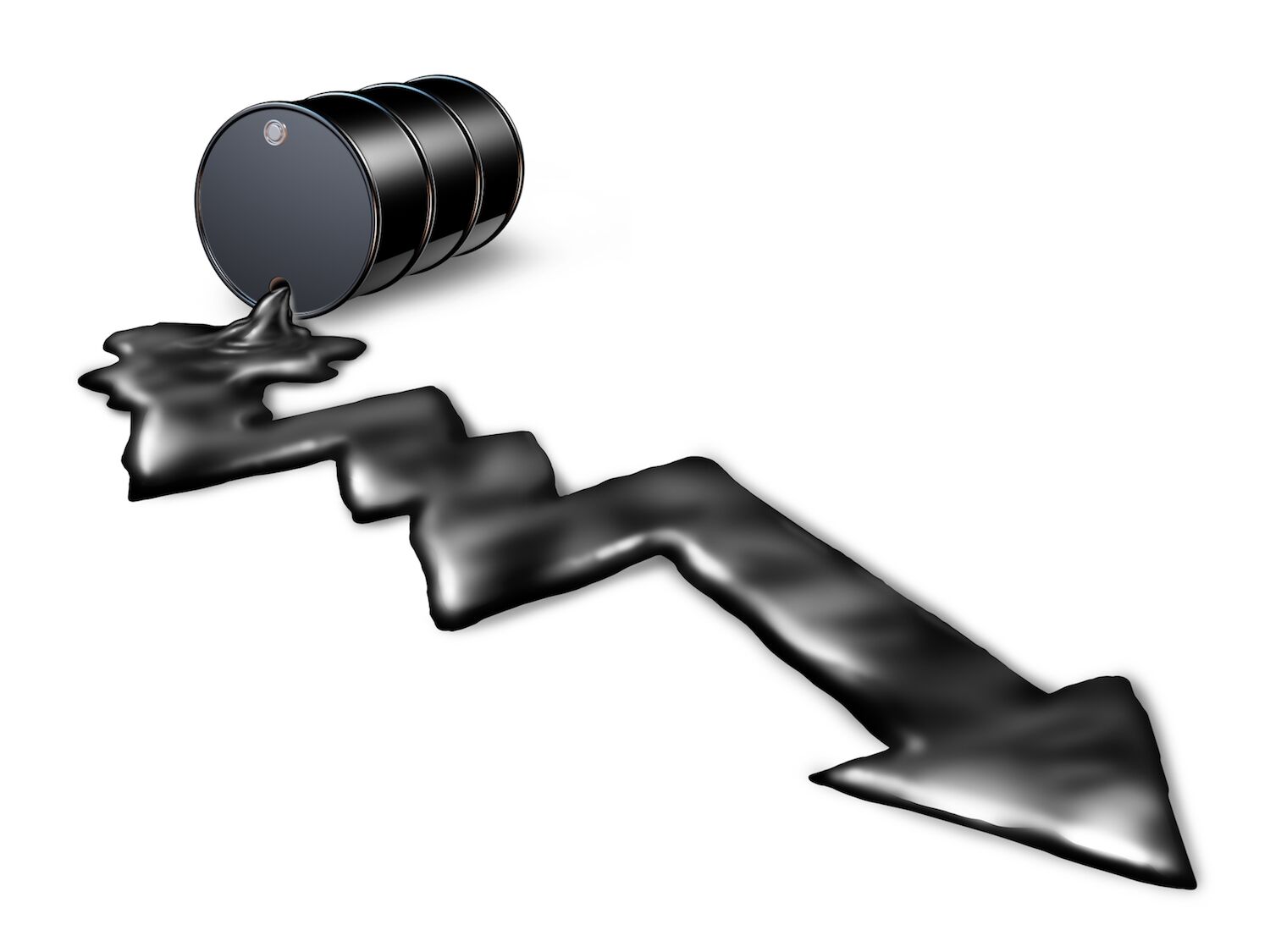 Oil prices fell sharply yesterday to levels last seen seven months ago. WTI Crude futures dipped 2.5% while Brent futures lost 3.5% on the day. The general consensus is that a continued increase in US oil production together with rising inventories are to blame. On Wednesday, the US Energy Information Administration (EIA) announced a 6th consecutive build in crude inventory in their weekly petroleum report. There are a whole host of political and economic factors that may be affecting oil price sentiment, ranging from general economic concerns, trade wars, US sanctions on Iran, dollar strength and the US’s complicated relationship with Saudi Arabia. To a chartist this is all largely noise, even general sentiment cannot be relied upon since a contrarian view is so often the right one to take to get an edge in the market. The best indicators of future trends are to be found on the charts where you can establish which support levels may spark a reversal in the current downward trend. 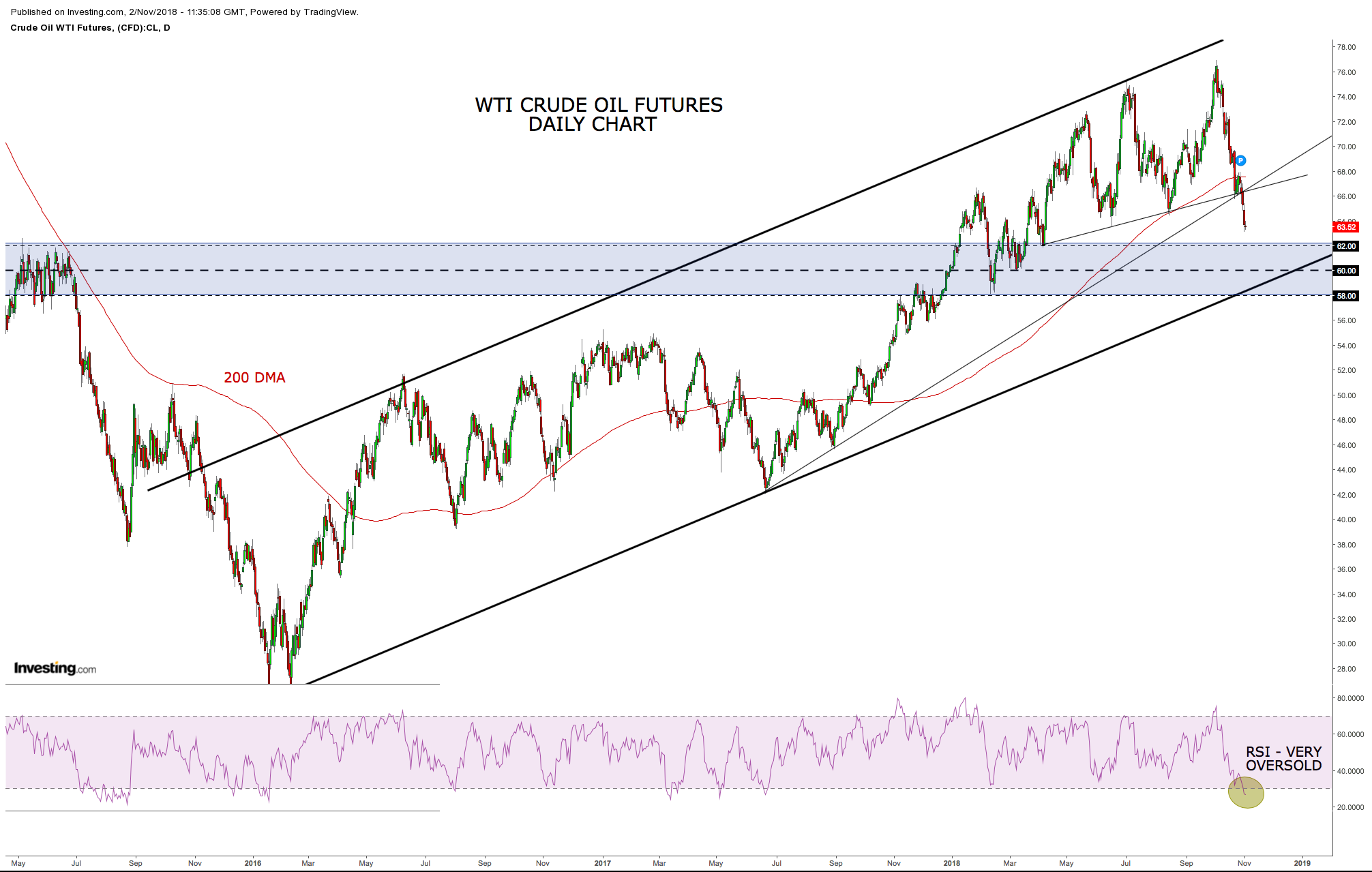 In the case of WTI Crude Oil, the price has broken below a minor area of support around $66 – the two thin black lines on the chart indicate the diagonal support in that region. The move has confirmed that price action wants to be below the 200 Day Moving Average DMA), another bearish indicator. The Relative Strength Index (RSI) is well into oversold territory but a test of the $62 level looks imminent – this, however, is the top of a fuller support zone which could see deeper testing, to $60 or even close to $58. The latter is worst case scenario and would see WTI test a level which has multiple elements of support. This support zone is largely formed from a multi-month consolidation back in 2015. All three levels ($62, $60, $58) were important steps visited and back-tested in early 2018 as WTI climbed.

WTI has been ranging in an upward trend channel since the lows of early 2016 and the bottom of this channel also adds strength to support in this area, with the channel bottom currently sitting at 58.5p and climbing. A prolonged breakdown of this channel would be a big concern for oil bulls, and a move below $58 would confirm a longer bearish move is likely on the cards. $60 is likely to be the battleground for a reversal in my opinion. It’s an obvious psychological price and round numbers usually have extra potency when it comes to support and resistance levels.

One less volatile way to trade fluctuations in the oil price is, of course, to invest in oil companies. We have highlighted a couple of medium sized players recently on ValuetheMarkets, namely Ophir Energy and Premier Oil. Both look to be considering a potential move higher, consolidating after bouncing off a support level. They may well be waiting for further cues from the oil price which still hasn’t found a convincing bottom yet.

Ophir has been making lower low for some time but did breakout of a falling wedge pattern in September. Even against a declining oil price and a number of macro market freakouts, any price weakness has continued to be bought in to. Thus far, the price action has respected a number of trend lines, back-testing levels in a textbook manner.

The RSI may prove to be the giver of the best clue to when the stock will choose to breakout. It is currently hugging below a downward line that, if closed above, may signal a move upward. All the while, a support line for the RSI can be seen to be closing in. The thin green line seems a sensible level for a bounce but we may see a little more indecisiveness. Either way, it won’t be long before the RSI breaks its triangle setup. If it’s to the upside, the first target for Ophir is 52p – the top of its current downward channel – but with the fundamental story becoming more compelling, this could just be the beginning of a reversal of a torrid multi-year share price decline for investors. A move breaking the current downward price channel opens up a second target zone of 65-67p.

In March 2018 we covered Premier OIl at 66p, and more recently last week, we highlighted the company at 99p, indicating two levels of possible support. 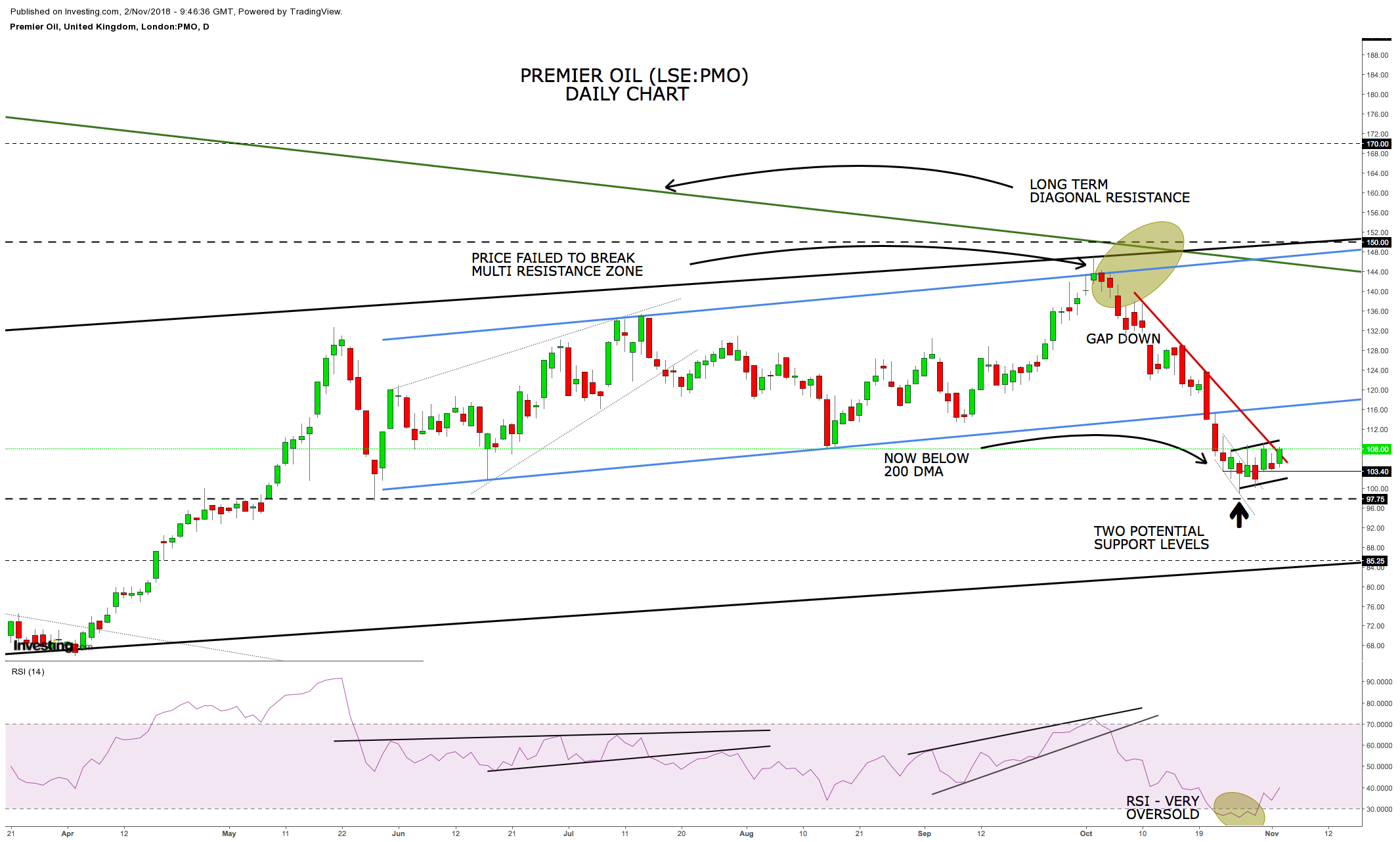 The stock appears to have bounced off the first level 97/98p, currently consolidating between 102-109p. The price action needs to break 109p for a further recovery back towards recent highs of 146p. The bottom of the recently broken-down flag (shown in blue) would be the next line of resistance. In light of the possibility that WTI may have further to drop in this price cycle, Premier may fail to break up at this juncture. Failure to maintain a share price above the 100p region may see a second wash of hard selling towards the bottom of its main multi-year trend channel which currently suggests an 86p worst-case support level.

Disclosure: The author owns shares in the companies mentioned above