Premier Oil (LSE:PMO) announced positive news from its exciting Zama discovery on Thursday. The firm said that the reservoir quality at Zama-2 was similar to that of Zama-1 and that operator Talos Energy had encountered 152 metres of net pay. What was perhaps surprising was the lacklustre response in the share price to the good news. Having risen around 4% in the morning, the stock closed just over 1.5% up on the day.

The Premier share price has proven to be very sensitive to the oil price but oil has been relatively stable since WTI found a firm footing above $50.  Brent, the more applicable benchmark to Premier, is also sitting pretty, now over $60 and appearing to consolidate. That’s not to say oil’s recent rally off the lows isn’t due a potential pullback.

Irrespective of the real-world headlines bandied about, (in my opinion) the chart technicals rule and many oil companies appear very closely linked to spot prices as you would expect – usually via a flurry of Automatic Execution trades. Ah, the bots! Most Premier holders, or certainly those who regularly trade it, will have noticed that at times the share price has a mind of its own. All’s fair in love, war and algorithmic trading, right? I jest. What I really want to get on to is a thorough look over Premier’s chart for clues of where it might go next. 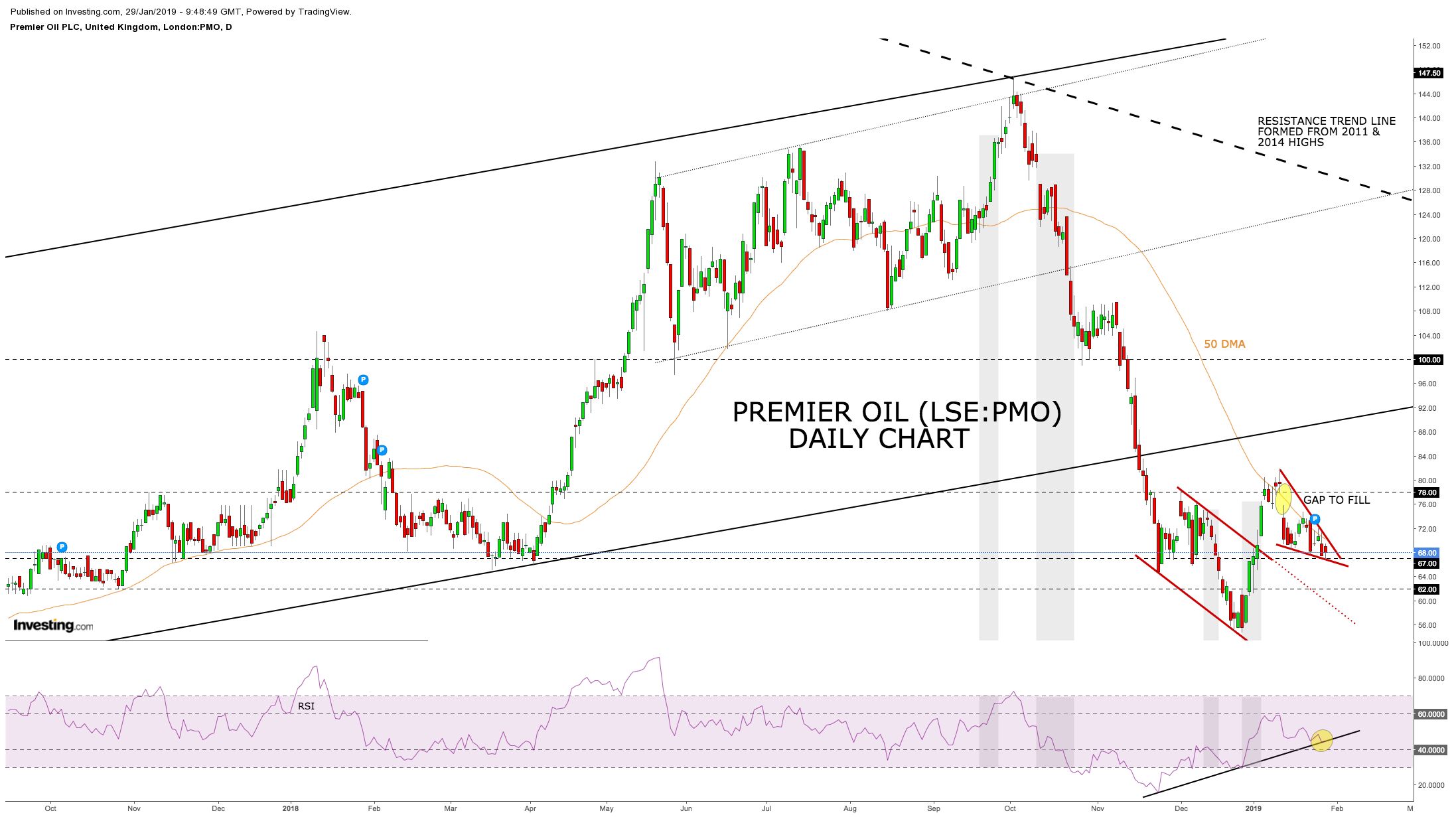 At the moment, the share price is skirting along it’s 50 Day Moving Average (DMA). This is only its second approach to the 50 DMA since the share price lost the upper hand back in October when oil started to fall sharply. A decisive, sustained move above the 50 DMA would do wonders for technical sentiment, but assuming the share price is still in the flirting stage, support may be called upon.  Premier has a significant history of support around the 67/68p level and that’s holding at the moment.

With the company’s fundamental story currently progressing in the right direction – debt falling, catcher exceeding original production targets, and the potential of Zama, Sea Lion, and Tolmont etc – there is little in the way of fundamental triggers to cause a significant decline from here. Likewise, the oil price recovery appears back on track too, again backed by a positive fundamental backbone provided by OPEC’s ability and willingness to turn the taps off in support of pricing.

What has caused Premier’s recovery from December lows to stall is the rumours of a possible bid for assets and subsequent cash call. According to an article by The Times published on 13th January, Premier was ‘in the running’ to acquire fields being sold by Chevron and was considering a cash call to shareholders in the event any bids are successful.

Premier responded the next day, saying ‘no firm decision has been taken to bid for all or any of the assets currently being marketed by Chevron and how, in the event that the group were to be successful, the acquisition of such assets would be financed.’

The stock price is still languishing around 68p as a result, and could well be another good opportunity to buy Premier below key support of 78p. Once broken, there isn’t much in the way of resistance up to 100p.

Should 67p support break down, 62p looks strong in reserve. The level has been key support on a number of occasions and is a natural step above the 56p bottom hit at the end of 2018, to continue the recovery story. Personally, I believe such a move flies in the face of real-world logic, but never underestimate the power of technical moves (or the will of the bots).

The Relative Strength Index (RSI) can be a very useful indicator at decisive times like these. Premier’s daily RSI is currently 45.5 and has been in a general uptrend over the past two months.

With a long position, you want the RSI to be in the top half, with 60-70 usually the sweet spot that sees the best action for upward moves. On the flip side, below 30 is very oversold territory but often 40 can prove to be a more interesting level to keep an eye on.  A transition below 40 tends to correlate with an exaggerated move as weakness sets in. As you can see on Premier’s chart, both the 40 and 60 RSI levels appear to have acted as support and resistance on a number of occasions. The shaded areas on the chart highlight areas where the share price has experienced a ‘step change’ crossing these key levels.  The RSI is currently resting on the trend line formed from its troughs. Frequently these lines don’t hold a second retest and if Premier dips further, it seems likely the RSI will test the 40 level once more.

Whichever way the stock chooses to go, one thing is for sure – a decisive move is imminent with the price action having coiled into a very tight wedge.

Disclosure: The author of this piece owns shares in the company written about above