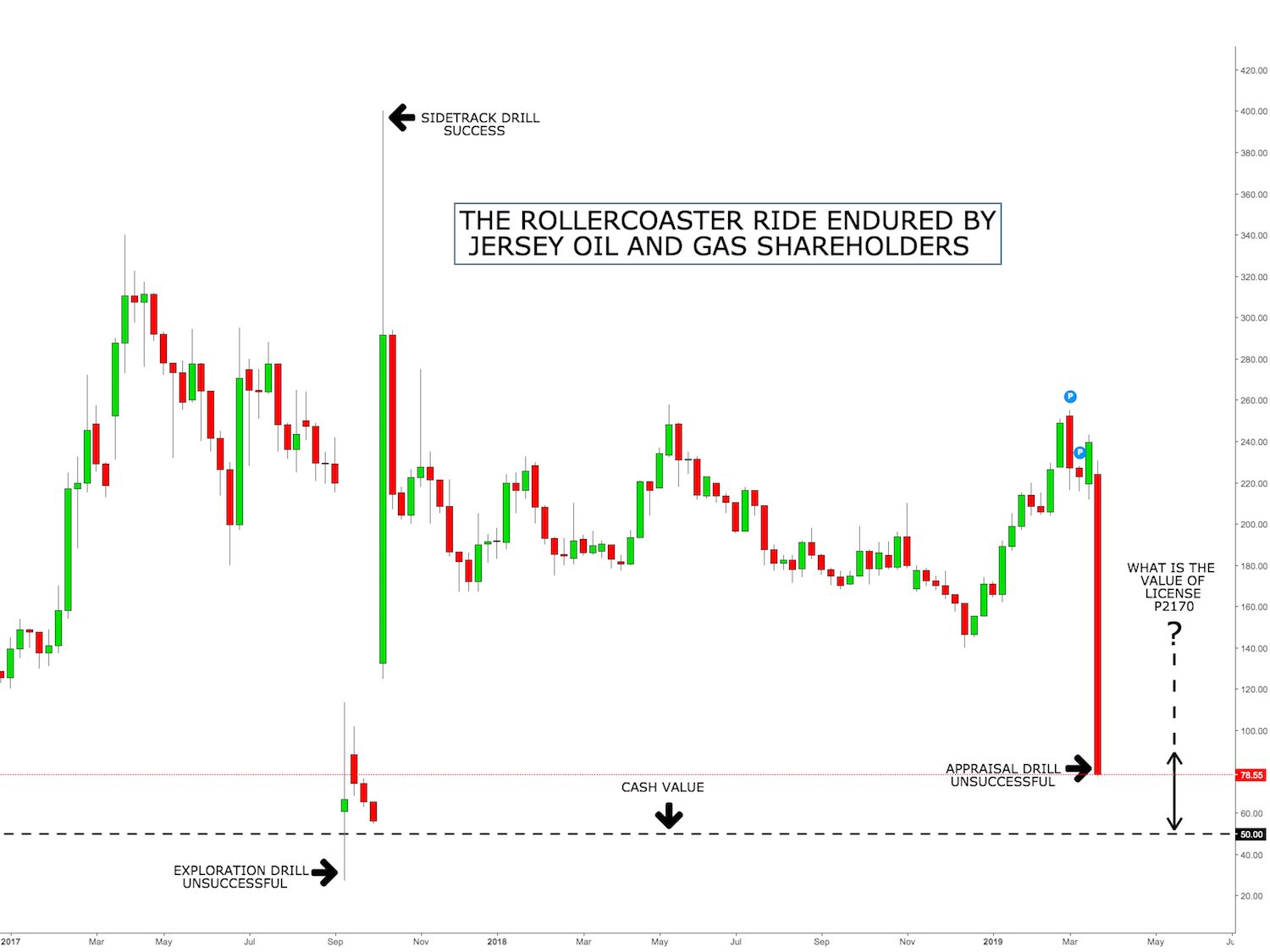 The share price of Jersey Oil and Gas (LSE:JOG) plummeted over 60pc on Thursday after the firm reported disappointing news from the Verbier appraisal well. The drill failed to encounter the targeted Upper Jurassic sands and, as a result, the contingent resource estimations for the discovery are likely to be revised down to the lower end of initial resource projections.

The failure of this high-profile drill, which was hotly anticipated by AIM investors, highlights the extreme risks of remaining invested through the drilling process. Many investors would have perhaps taken some reassurance from the involvement of big players such as the operator Equinor (previously Statoil), and a large investment from Schroders, but the fact remains all exploration drilling is high-risk.

What makes matters worse in the case of junior explorer Jersey Oil and Gas is that the company’s valuation is heavily aligned with the Verbier discovery and the P2170 Licence in which it is situated.

However, it would be very premature to write the asset off at this stage. New data from the well will be analysed and the commercial viability of Verbier reassessed. Longer-term shareholders have previously experienced the wild ride of huge disappointment and subsequent success after the first drill of Verbier failed, only for a subsequent sidetrack well to hit the jackpot.  Can it happen again? Anything is possible, if it looks more likely that the resource is smaller than hoped then may opt to cut its losses.

Arguably in the best-case scenario Jersey Oil will still need to fund its 18pc share of any further drilling at Verbier. The last drill cost the firm around £9-11m so will Jersey need additional funding?

We know the cash balance was £22.1m as of the end of June 2018 and administrative costs for the first half of 2018 were around £900k. Deducting the drill expenditure and a guestimated £1.45m in administrative costs for the past nine months, suggests a current estimated cash balance in the region of £10-11m. On that basis, the company is likely to need to raise again should further drilling be sanctioned with comparable costs.

At today’s 80p share price, Jersey oil has a Market Cap of £17.5m. Its approximate cash balance today equates to around 50p per share, so the market currently attributes around or 30p per share to the firms 18pc share of the P2170 Licence.

If Verbier proves to be commercially viable then this valuation is extremely low. Even at the lower estimate of gross recoverable resource at 25MM barrels of oil equivalent (boe), the previously stated Net Present Value (NPV10) for Verbier is £31.2m net to Jersey Oil. Add in the Cortina and Meribel assets at a similiarly low estimate and the NPV10 totals £83.7m for the licence.

Everything rests on the commercial viability of the license. Clearly if fresh data from the appraisal well determines this as a much less attractive proposition for Equinor then the share price will likely see further pressure towards its cash valuation.